Every year as part of Tucson’s gala Fiesta de Los Vanqueros in late February, the city stages the longest nonmotorized parade in America: 350 Conestoga wagons, stagecoaches, buggies, buckboards, and fringe-top surreys, along with detachments of high-stepping horse and rider in full regalia.

In the weeks before the event, the Parade Museum opens up to the public; and it is really fun to see. Don’t expect million-dollar silver saddles, though; this homespun exhibit, in what was once Tucson’s first airplane hangar, features an assortment of prairie schooners and buggies, lots of old saddles and tack, a bunch of colorful Old West storefronts with costumed dummies inside, picture of the Parade Committee posing in their matching outfits over the last several decades, and some really hospitable gents from the Parade committee who are more than happy to show you around. Our personal favorite exhibit is in the left hand corner as you enter: the Ciso Kids aqua- blue horse trailer, for hauling around his favorite horse, Diablo. 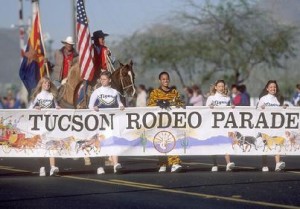