Tombstone, site of the Gunfight at the O.K. Corral, bills itself as “The Town Too Tough to Die.”

Once the toughest silver mining camp in the West, it is now one of the most fun-filled tourists attractions, offering not only the O.K. Corral with the Earps and the Clantons posed mid battle, but also an adjacent electronic diorama, called the Historama, narrated by Vincent Price, which entices customers with the promise they will hear the “dread Apache war cry piece the air!”also on the bill of fare; Boot Hill, the graveyard where unlucky gunslingers were buried (and where there is now a big gift shop); periodic gun battles (with blanks)in the street; and Grandma Fudpucker’s collectable shop, specializing in Emmett Kelly, Jr., clown figurines and Tiffany-like lamps. 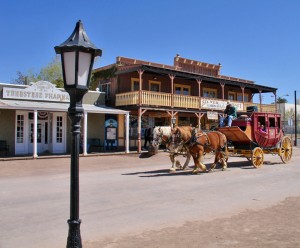