That was the pronouncement by Hall of Fame trainer Bob Baffert after he watched Kentucky Derby and Preakness winner American Pharoah gallop on the main track Thursday morning in preparation for Saturday’s Grade 1, $1.5 million Belmont Stakes, the third leg of the elusive Triple Crown to be contested as part of the Belmont Stakes Racing Festival presented by DraftKings.

“It was his first trip around there and we jogged straight off and he started galloping about the seven-eighths pole. I really couldn’t see anything down the backside because it’s so big around there, but when he finally came down the stretch he was moving so fluid, just like he usually does. It was a very positive gallop. He looks like he’s just moving along like he’s always moved along. It was very comforting to see that,” said Baffert.

American Pharoah, the reigning 2-year-old Male Champion, has never raced at Belmont Park and the 1 ½-mile “Test of the Champion” has unraveled the high hopes for Triple Crown immortality of 13 other horses since Affirmed last captured the glory in 1978.

Baffert thinks the Zayat Stables homebred son of Pioneerof the Nile, who went out to the track under regular exercise rider Jorge Alvarez and accompanied by assistant trainer Jimmy Barnes on Smokey the stable pony right after the break at 8:45 a.m., is coming out of the first two legs the best he can be. 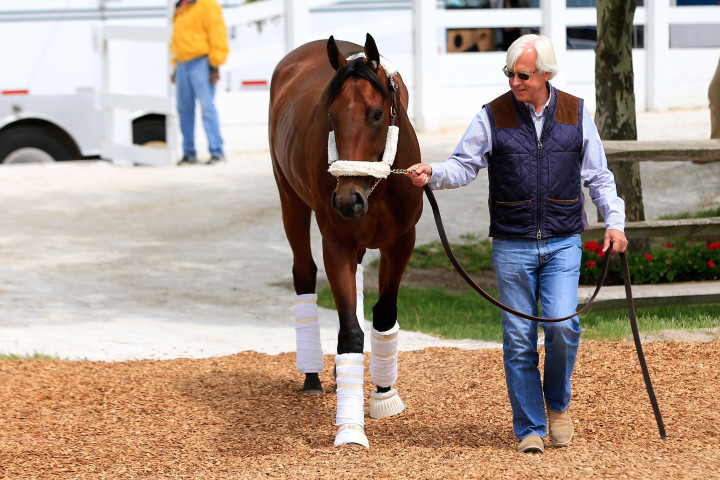 “You can tell he still has his energy. It’s still there. So far, from everything he’s seen he still has his energy. He’s holding his form really well,” Baffert said. “We look at their body language and he looks bright. His eyes, his ears, look good. When we put the saddle on him and brought him out and gave him a couple of rounds around the barn, you could tell he’s happy and enjoying what he does. He’s a very happy horse and you could tell he was enjoying himself out there this morning. That’s the way he runs.

“When he’s happy, he really enjoys running. I think he was happy to get out there and take a spin around the track. His exercise rider said he was pretty tough and wanted to do a lot more. It was a very good sign,” continued Baffert.

American Pharoah, who is undefeated since losing his debut in a maiden special weight race at Del Mar in August and has earned $3,730,300 while winning six of seven starts, has never traveled farther than the 1 1/4 miles of the Kentucky Derby. With 2003 Belmont winner Empire Maker as his paternal sire, he may stay the trip.

“He doesn’t know he has to go the extra distance, so we’re going to surprise him with that one,” Baffert said.

So far American Pharoah, whose dam sire was the good sprinter Yankee Gentleman, has handled all that’s been thrown at him. Forced to skip the Grade 1, $2 million Breeders’ Cup Juvenile, where he was the prohibitive pre-race favorite, due to a foot injury suffered while training, Baffert gave him plenty of time before running him in March for the Grade 2 Rebel Stakes at Oaklawn Park.

“We brought him back this year and he’s been golden since then,” said Baffert, who added that he knew the bay colt was his Derby horse once he won the Grade 1 FrontRunner around two turns gate-to-wire at Santa Anita in September. “He’s just marched right along. They’re very fragile, which is why you have to enjoy every day of this and hope he keeps it together. Like with any athlete, one little misstep or whatever….they can do something, or get sick. They’re just like little kids. So far, so good, and now we’re keeping our fingers crossed.”

American Pharoah, along with stablemates Bayern and Enchanting Lady, visited the paddock for their first schooling lesson on Thursday around 11:30 a.m. Although Bayern is the defending Breeders’ Cup Classic winner as he heads into Saturday’s double-tough Grade 1, $1.25 Metropolitan Handicap and the filly is running in Friday’s Jersey Girl Stakes, all eyes were on the beautifully conformed American Pharoah.

“I expect Bayern to run really well,” Baffert said of the 2014 Grade 2 Woody Stephens Stakes winner, who put on a powerful performance to win by 7 1/2 lengths on last year’s Belmont Stakes undercard. “He really needed his last race when he didn’t run well at all. He’s got the speed inside of him, but he’s got plenty of speed, too.”

Bayern’s Breeders’ Cup Classic win was especially meaningful to Baffert as it filled in one of only two empty spots on the silver-haired trainer’s long and stellar resume. Now the Triple Crown is the only one missing.

Nonetheless, he downplayed the significance of the accomplishment and all it would hold for him.

“I’ve had my career,” said Baffert, who won the 2001 Belmont with Point Given but has come up empty with Silver Charm, Real Quiet and War Emblem in Triple Crown tries. “I’m just finishing off and not thinking about myself. We’ve been very fortunate to accomplish what we have. I’ve never set any goals for myself. I’m just hoping there is another good 2-year-old coming into the barn. Every year I say there is no way I can never have another year as good as this one. I’ve been so fortunate to have a lot of good horses come through this barn, so you just have to count your blessings.”

But American Pharoah’s owner and long-time client Ahmed Zayat wasn’t buying any of that.

Zayat grabbed the news conference microphone to say, “Don’t believe a word he said. I can tell you about this guy. He is the most competitive guy I have ever known in my life. He does set goals and they are extremely high and lofty. He wants to go down in history as one of the best that America knew. And for me, he is the best.”