Zionsville, IN – August 11, 2012 – The final day of the competition continued today at the 2012 Traders Point Hunt Charity Horse Show and Country Fair. Once again, perfect weather drew in a large audience from the Indianapolis area for an exciting day of show jumping at Wild Air Farms in Zionsville, IN.

Veteran course designer and judge, Phil DeVita, produced a challenging course for the competitors for the highlight of Traders Point, the $60,000 Grand Prix of Indianapolis. Throughout the week, DeVita’s courses have been twisting and winding with few related distances and have stressed that the rider carve the turns and get in straight, while staying within a tight maximum time.

“Today is a little bit of the same and a little different,” DeVita explained. “I went with a touch of the derby theme. We’ve got more natural elements, brush, straw, brush, natural poles, stained poles, white poles with grass poles. I tried to mix and match a little bit more.”

“It’s sort of a big wide-open field. We start out, which is a little abnormal for me, over a vertical−it’s got a little brush under it. So its got a little ground line- a friendly jump. Then, we loop around to the first oxer, which is pretty much 1.40m square, so it starts out a little serious. Then, we make an “s” for 1-2-3. Three is a 1.45m vertical.”

“Then, the first of only two somewhat related distances, bending line-could be six or seven strides-to fence 8, a 1.45m oxer. A left turn around to the first combination-so we’re basically doing an “s” to a serpentine−and we’re jumping a vertical oxer combination up on the far end of the ring. Making a left turn and back to the open ditch with just three poles−a little airy.”

“Then, right up the bank and four natural poles-very airy on the bank. Then a little different: we’re going to gallop down the bank straight to the water. All you’ve got to do is get straight. The momentum of the bank is going to get you over the water. I don’t think it’s going to be really difficult. I think it’s a balance issue.” 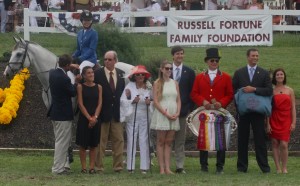 “Then, they’re going to have to re-group and re-organize, make a right hand turn to the stained pole gray pillar vertical−27 feet-one stride and it’s pretty substantial. We’re right at 1.45m there and coming out is almost 1.50m. From there we make a serpentine−a right turn up over the middle oxer, which is almost 1.50m−all the oxers are 1.50m spreads. From there we take a left turn to the tallest jump on the course, a three-pole, white plank, it’s about 1.53-4m−big, tall straight up and down vertical. Then we make a dog-leg left to an airy liverpool, then probably seven strides balancing down to the last two fences, a pair of oxers−the first one set at 1.50m spread at 1.45m. The second oxer is 1.55m spread and it’s just about 1.50 on the back rail. So, it’s a little bit of scope test. Horses are tired. It’s the end of the course.”

“I would love to see five clear, if I got six I’d be happier and seven would be better. For $60,000 it needs to be a little bit of a test. A broke horse has an edge. Not easy and not free,” stressed DeVita as he considered the integrity of his course.”

Wilhelm Genn and Palim Palim, a tall, attractive Westphalian with a distinctive blaze, was the first to deliver a clean round in the short track. He made it look easy and clearly carved the turns, which left all the rails in their cups, coming in at a time of 51.229.

Then, young Taylor Land and Nepal produced what would be the only other clean jump-off round, expertly ridden and stopping the timer at 45.969, edging Genn out of first place.

“I really liked the course,” shared Land. “I liked getting to jump all the natural obstacles−and so does Nepal. We’re going to the Hampton Classic after this, so it was good to practice−jumping the water and everything. It was a fun course.”

“I was a little bit more conservative in some places,” Land said of turning on the grass, something that DeVita had mentioned would be the approach of the more seasoned riders.”

“Nepal is 10 and we’ve had him since he was 5. He’s been an amazing horse for our whole family. He‘s super careful. He’s a little quirky, but he’s a lot of fun. He’s from Argentina, a warmblood.”

“This is a horse I got in training about six weeks ago, so we don’t know each other very well,” he shared about Palim Palim. “He’s very new at this level. He’s only jumped a few Grand Prixes, so that is why I didn’t want too go fast in the jump-off. I was so happy he jumped clean and finished nice and smooth.” 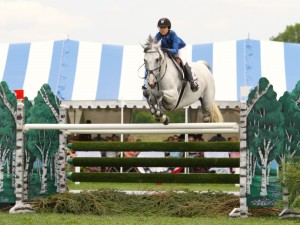 Earlier in the day, the Low Junior/Amateur-Owner Jumper brought a win for Mallory Vale. This time with Ashway Calisto.