LAS VEGAS – Any more all-around world championships and Trevor Brazile will be forced to start counting with his toes.

The Decatur, Texas, cowboy clinched his record 10th all-around gold buckle during the fifth round of the Wrangler National Finals Rodeo on Monday night thanks to a third-place go-round finish in team roping.

“It’s just such a relief,” Brazile said. “As much as I try not to let it affect anything, it kind of just releases me to go try to do whatever it takes to win the team roping, and just concentrate on that title. That is the immediate thing that I think about. And as far as the long-term stuff, 10 world titles is more than I ever could have dreamed of. It’s awesome.” 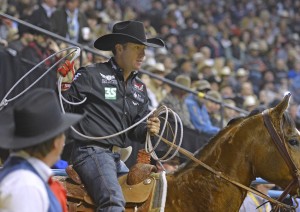 “To do it one time is hard,” Brazile said. “Anyone that’s been out here knows how much things have to go right. I’ve been so blessed, with the injuries I’ve had, to be able to still team rope, or I could always keep moving.”

On Friday night, bull rider Seth Glause made the eight-second whistle and finished fourth in the second round of the Wrangler National Finals Rodeo, but it cost him a broken nose.

Three nights, two qualified rides and an added helmet later, Glause kept his name in the race for the world championship gold buckle.

The Cheyenne, Wyo., cowboy won the fifth round Monday night with an 87.5-point ride aboard Growney Brothers Rodeo’s Canadian Tuxedo in front of 17,473 fans at the Thomas & Mack Center . “I guess getting popped in the face must’ve woke me up a little bit,” the 24-year-old bull rider said. “The broken nose hasn’t really affected me, and putting a helmet on was a little different the first time, but now I’m just here to do my job and it doesn’t matter what’s on my head.”

It was three-time World-Champion J.W. Harris who regained the world standings lead from Cody Teel thanks to a fourth-place finish in the round. The $7,656 check moved Harris back ahead of the NFR rookie by $7,189.

The Mullin, Texas, man also leads the average race by five points over Glause, who has moved from fifth to third during the first half of the 10-night rodeo and trails Harris in the world standings by $65,231.

Steer wrestler Trevor Knowles had posted four strong performances to open the NFR, but was looking for a breakthrough when he drew the top steer in the pen on Monday.

The Mount Vernon, Ore., bulldogger got just that, and threw his steer in 3.3 seconds, winning the round by six-tenths of a second.

“Billy Bugenig won the second round on that steer, so when we all showed up down there tonight to see the draw, you were hoping you’d hear your name with a number 39 behind it,” Knowles said. “I didn’t feel like I was struggling, but it wasn’t the sweet spot. Tonight, I had Mark McGwire with a right-down-the-pipe fastball. He knows when its halfway there, it’s a goner. That’s kind of what it felt like tonight.” The race to the gold buckle isn’t nearly as clear.

Three-time World Champion Luke Branquinho took over the lead in the world standings thanks to a second-place finish, but a no-time in the first round has him out of the average race. As is typical, this race to the gold buckle will likely come down to the 10th and final night.

One night after Memorial Night – which included honoring his fallen roping partner, Broc Cresta – Spencer Mitchell teamed with Dakota Kirchenschlager to tie for the fifth-round victory in team roping.

Cresta, a two-time NFR qualifier, died in his sleep at Cheyenne (Wyo.) Frontier Days on July 28, and many cowboys have honored him this week by wearing a “BC” patch on their attire.

“It’s been a whole different feeling here this year,” Mitchell said. “I roped with Broc at every finals and major event I ever went to – from junior rodeos all the way to last year’s NFR. I’m just lucky to have Dakota with me here this year. It helps to see another friend when I look over on the other side of the chute.”

The two tied Brock Hanson and Ryan Motes, who finished first in a go-round for the second time this week.

“You couldn’t ask for a better steer, better run or better pair of guys to split the round with,” said Motes, from Weatherford, Texas.

Trevor Brazile and Patrick Smith finished third in the round to add to their lead in the world standings. Chad Masters and Clay O’Brien Cooper lead the average race with 39.2 seconds on five.

The saddle bronc riders faced a fierce pen of horses in Round 5, with only three of 15 riders making a qualified ride. Out of that dust emerged NFR rookie Cole Elshere, who took Burch Rodeo’s Lunatic Fringe for an 83-point trip.

“He was the horse I wanted because I knew I could ride him and he fit my style, but I knew all of the horses out there tonight were capable of beating Lunatic,” the Faith, S.D., cowboy said. “It worked out and I’ve been lucky to place in a few rounds before tonight, but winning a round was my goal in my first NFR.”

“I had her at Cheyenne Frontier Days in the short round and did real good, so I was excited to draw her,” Colletti said. “It’s especially hard being first up in the very first event. Everybody’s looking forward to watching it and wants to see something really good.”

Reigning World Champion Kaycee Feild held onto his lead in the world standings despite finishing out of the money. He leads Will Lowe by $28,508 in the race for the gold buckle, and by 5.5 points in the NFR average race.

Similarly to Colletti, Shiozawa took a pair of no-times in the first four rounds, but won the fifth with a 7.2-second run.

“Last year I’d knocked quite a few rounds down by now,” the Chubbuck, Idaho, man said. “This week, I’ve already been through highs and lows. I got dragged by a calf a few nights ago, and tonight I won. It’s the nature of the game.”

The intriguing race between Justin Maass and reigning World Champion Tuf Cooper continued when Maass took fourth place in the round and Cooper didn’t place. Cooper holds a $5,745 lead over Maass. The two sit first and sixth in the average race, respectively.

Kaley Bass, of Kissimmee, Fla., won the fifth round of barrel racing in 13.68 seconds. Two-time World Champion Brittany Pozzi finished fifth in the round and leads Mary Walker – who was fourth – by just $1,560.

Walker remains atop the leaderboard for the Ram Truck Top Gun Award – given to the NFR’s top earner in a single event – with $62,428.

The rodeo continues with the sixth performance at 6:45 p.m. on Tuesday night.