Trained by Bob Baffert, Sky Kingdom ’s most recent start came in the Grade II Robert B. Lewis Stakes on Feb. 4, a race in which the Kentucky-bred by Empire Maker finished 10 ¼ lengths behind eventual Kentucky Derby and Preakness Stakes winner, I’ll Have Another.

“To run as huge as he did today, being away as long as he was, is fantastic,” said Baffert assistant Jim Barnes.  “We were wide turning for home, but he was really running.  I’m happy for (owner) Westrock (Stables) and Martin rode him really good.”

With 2-1 Gladding setting a quick pace of 22.72, 46.00 and 1:10.09, Garcia and Sky Kingdom were next-to-last into and around the Club House turn and all the way up the backside until the field of seven reached the far turn.  At that point, the field bunched and Garcia made the decision to keep his mount running and in the clear. 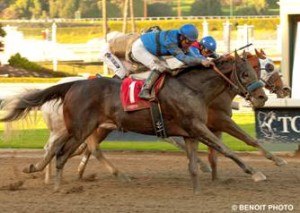 In a three-horse duel to the wire, Sky Kingdom prevailed over Blueskiesnrainbows, with Rafael Bejarano and it was another head back to third-place finisher Phantom Lover and Victor Espinoza.

“When we went into the first turn, that is exactly where he wanted to be,” said Garcia.  “I wanted to be clear and put him wherever he was going to be comfortable, and try to save ground.  At the half mile I had to find a place because of traffic, so I decided to move him outside.”

Off as the 2-1 favorite, Gladding, one of three past stakes winners in the second-condition allowance Kern River , weakened late and finished last.  The lone participant entered for an optional claiming tag of $62,500, Gladding was haltered by trainer Vann Belvoir.

There is a Pick Six carryover of $55,831 into Friday at Santa Anita.  It is expected that the total pool on Friday should exceed $300,000.  The Pick Six will cover the final six races, three through eight.