Lexington, KY – September 28, 2012 – It was a thrilling $50,000 World Cup Qualifier at the Kentucky National Horse Show as 41 competitors gathered at the Rolex Stadium for their last chance to take the top honors and the highly coveted Leading Rider Award for the 2012 Hagyard Challenge Series. It was Shane Sweetnam who held on to his solid lead at the top of the standings for the 2012 Hagyard Challenge Series.

Consisting of seven grand prix classes held during the 2012 show series at the Kentucky Horse Park, the Hagyard Challenge Series, sponsored by the Hagyard Equine Medical Institute, offers a $50,000 Leading Rider Award. Sweetnam stepped forward to receive the award during the World Cup Qualifier at the Kentucky National Horse Show.

During the Bluegrass Festival Horse Show, Sweetnam piloted Solerina to the first place finish in the $10,000 Hagyard Welcome Stake, and also picked up the first place award with his other mount, Amaretto D’Arco , during the $25,000 Hagyard Lexington Classic on August 24, 2012. Sweetnam captured the lead with 830 points, and added an additional 40 to his cumulative score to win the prize money.

Kaitlin Campbell held the second place position with 710 points. Reed Kessler finished the series in the third place position, even though her Kentucky Spring Series rankings held steady for three of the Hagyard Lexington Grand Prix events. Beezie Madden was acknowledged for her 390-point finish to take the fourth position, while Ashlee Bond was awarded the fifth place spot in the rankings with 290 points.

The 2012 Hagyard Challenge Series concluded with the $50,000 World Cup Qualifier during the Kentucky National Horse Show this past week, and riders are now getting prepared for the 129th Edition of the Alltech National Horse Show.

The sponsor the series, the Hagyard Equine Medical Institute, is one of the oldest and largest equine veterinary practices in the world. Founded in 1876, the institute offers a staff with qualifications unparalleled by any single non-university veterinary group in the equine industry, and Hagyard veterinarians have dedicated themselves to the health and well being of the horse for more than 130 years.

For more information about Kentucky Horse Shows, LLC, in 2012, please go to www.kentuckyhorseshows.com. 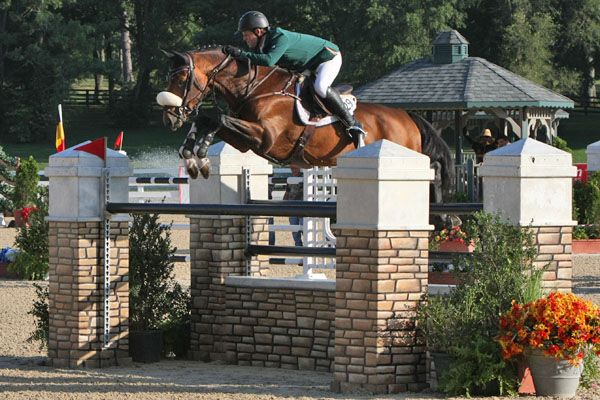 Photo Credit: Shane Sweetnam was awarded the Leading Rider Award for his high score of 870 points during the 2012 Hagyard Challenge Series