ARCADIA, Calif. (June 13, 2013)—Ramon Dominguez, a three-time Eclipse Award-winning jockey  who announced earlier today that has been forced to retire at age 36 due to the severity of head injuries sustained in a spill at Aqueduct on Jan. 18, will forever be regarded by fans, horsemen and management at Santa Anita as not only one of the greatest jockeys of all-time, but as one of the classiest as well.

A native of Caracas, Venezuela, Dominguez came to America in 1995 and soon thereafter became a powerful force in the Mid-Atlantic region, winning multiple riding titles at Laurel Park, Pimlico and Delaware Park prior to moving his base of operation to New York in 2008. 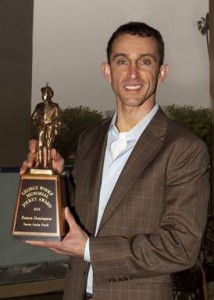 By a vote of his peers, Dominguez was selected as the winner of the 2012 Santa Anita George Woolf Memorial Jockey Award, bestowed upon jockeys who have not only excelled on the racetrack, but have also comported themselves with honor and dignity in their personal lives.

“Ramon Dominguez is one of the classiest jockeys to have ever won the Woolf Award,” said Santa Anita President George Haines.  “While we know this decision was difficult and very disappointing to Ramon on both a personal and professional level, we congratulate him on a career that will no doubt result in his induction into the National Museum of Racing’s Hall of Fame in the near future.

“Ramon’s retirement underscores the dangers of his profession and we know he will continue to be an invaluable member of the racing community in whatever role he chooses for himself and his family.  It was a distinct honor to have Ramon and his agent, Steve Rushing, with us to accept the Woolf Award last year and we want to wish them both all the best.  We look forward to seeing Ramon in the future and want him to know that he and his family are welcome here at The Great Race Place anytime.”

A winner of the nation’s Eclipse Award as leading jockey three consecutive years, in 2010, 2011 and 2012, Dominguez led the New York Racing Association circuit with 322 victories in 2012—his fourth consecutive NYRA title.

Dominguez and his wife, Sharon, have two young sons and they reside in New York state.  He retires with 4,885 wins and career earnings of $191,615,698.  His wins include three Breeders’ Cup victories: the 2004 Turf with Better Talk Now, the 2011 Juvenile with Hansen, and the 2012 Turf with Little Mike at Santa Anita.  Overall, his mounts won at an outstanding 23 percent clip.