ARCADIA , Calif. (Aug. 14, 2012)—Santa Anita Park has announced a 28-event stakes schedule worth over $4 million in purses for its 24-day Autumn Meet which begins Sept. 28.  The meet offers one of the world’s most lucrative stakes programs which will be keynoted by six Grade I  “Win and You’re In” Breeders’ Cup prep stakes, five of which will be run on Saturday, Sept. 29, with the remaining Grade I event to be run Saturday, Oct. 6. 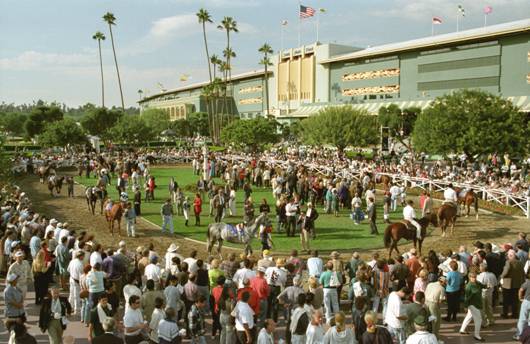 The meet will reach a crescendo with the two-day, $25.5 million Breeders’ Cup World Championships on Nov. 2 & 3, and will conclude the following day, Sunday,  Nov. 4.

Santa Anita’s Autumn stakes lineup features a total of 13 graded races beginning with the inaugural Grade III Eddie D Stakes on Sept. 28.  The Eddie D is one of 13 Breeders’ Cup prep races and is for 3-year-olds and up at 6 ½ furlongs down Santa Anita’s hillside turf course.  This race will serve as a steppingstone to the $1 million Breeders’ Cup Turf Sprint on Nov. 2.

The 2012 Autumn Meet will also feature two new stakes for 2-year-olds competing on grass, the Zuma Beach (colts and geldings) and the Surfer Girl (fillies), both at one mile, to be run on Columbus Day, Monday, Oct. 8.

The Conway is for 2-year-olds at six furlongs and the L.A. Woman is for fillies and mares 3-and-up at 6 ½ furlongs.

Week three will be highlighted by the 23rd annual California Cup, a series of races restricted to horses bred or foaled in California , to be run Saturday, Oct. 13.  Total purses for the afternoon will exceed $1 million.

Aside from Columbus Day, Santa Anita will run on a Thursday through Sunday schedule.  First post time each day is 1 p.m., except Breeders’ Cup Friday, Nov. 2, when first post is 11:15 a.m. and Breeders’ Cup Saturday, Nov. 3, when the first live race will go at 10:05 a.m.

The 29th annual Breeders’ Cup, which will be conducted for the sixth time at Santa Anita, will be headlined by two Grade I events, the $2 million Ladies Classic on Friday, Nov. 2 and the $5 million Classic on Nov. 3.

The Autumn Meet will close out in style with the Grade II Goldikova Stakes for fillies and mares at one mile on turf, on Sunday, Nov. 4.

To make dining and seating reservations for the upcoming Autumn Meet, fans are encouraged to visit www.santaanita.com or call (626) 574-RACE.