Franklin, Tenn. (May 11, 2015) – Two Franklin women will compete at this weekend’s Franklin Rodeo.

Cowgirls Jessi Fish, age 22, and Rae Scott, age 19, will barrel race at the 66th annual rodeo.
Fish, the veteran of the two, grew up attending the rodeo and volunteering at it. Since she turned pro as a member of the Women’s Pro Rodeo Association four years ago, she’s run barrels at her hometown rodeo each of those years.

Last year was the first year Fish competed  the most on the rodeo circuit level, going nation-wide with her competition. In a sport that involves long hours driving, lots of travel, and a high-dollar horse that can perform under a variety of conditions, she has done well. She’s won checks at big-time rodeos in Red Bluff, Calif., Puyallup, Wash., Dodge City, Kan., and Phillipsburg, Kan.
Her winnings last year showed that her seven year old mount, a gelding whose barn name is Show Off, can do it. He’s young, but he’s proven himself. “He’s the only horse I rode last year,” Fish said. “I ride him almost everywhere (at rodeos). He’s done well for me.” 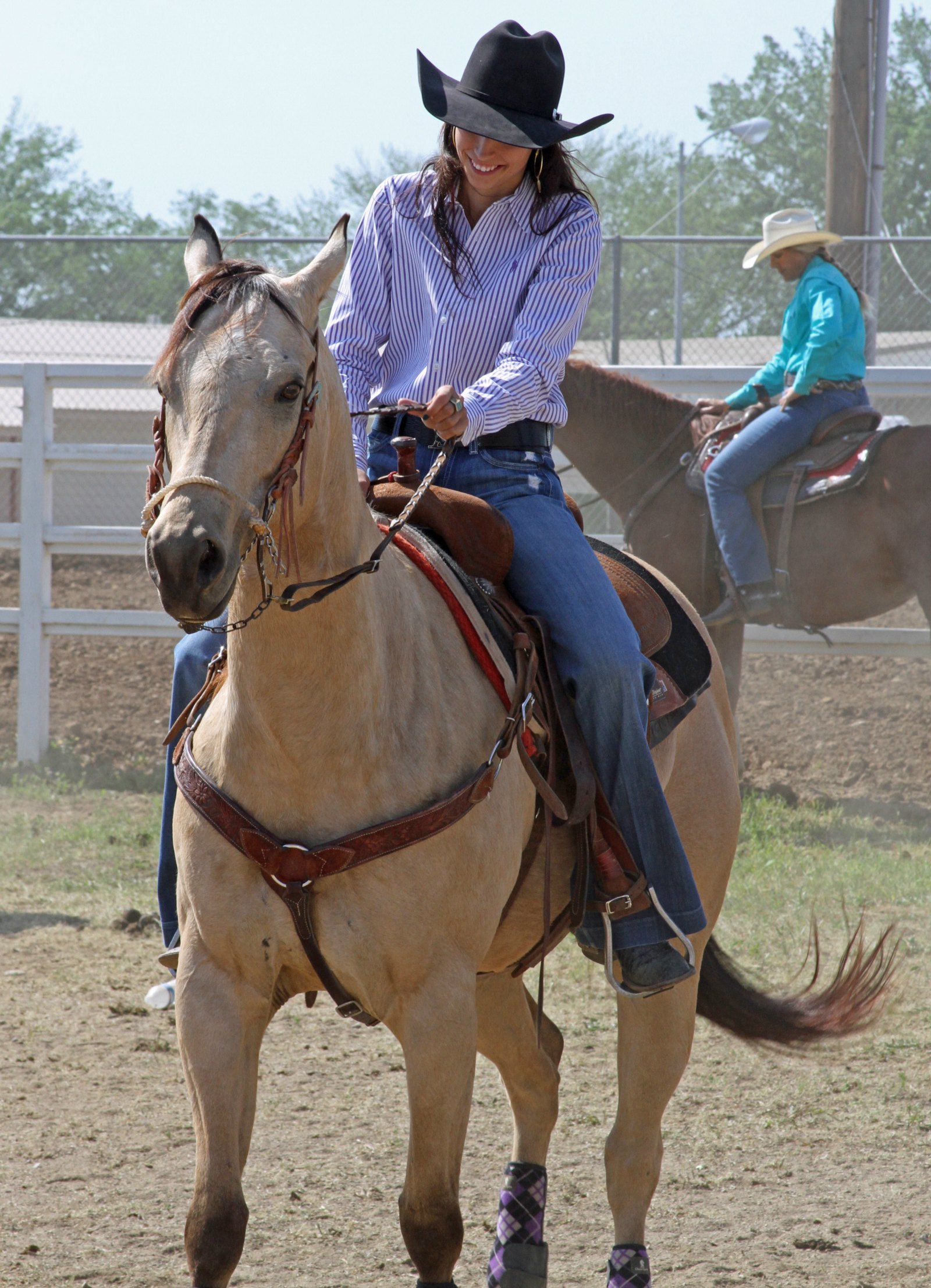 She has a backup horse, named Hot Rod, in order to have two mounts and take some pressure off Show Off. “Having one horse is hard,” she said. “Show Off is young, and he’s done well, but he still acts green sometimes.” Show Off runs better at outdoor arenas, where Hot Rod does best in the indoor arenas.

Even though she still calls Franklin home, Fish has a part-time residence in Lipan, Texas, in order to be closer to pro rodeos and able to practice through the winter.

She loves the rodeo lifestyle, and prefers being in the arena than in the stands at the Franklin Rodeo. “It’s a lot different, but it’s what I’ve wanted to do. Getting to rodeo, good or bad, I’d rather do that than watch. I’m much happier not being a spectator.”

Her family will also be able to watch her run. Her parents, Scott and Linda Fish, brother Jordan and sister Julie plan on being in town.

Jessi’s barrel racing run will take place during slack, the extra rodeo competition that doesn’t fit into the performances, on Friday morning at 9 am.

Franklin is home to a second cowgirl, another barrel racer, Rae Scott. 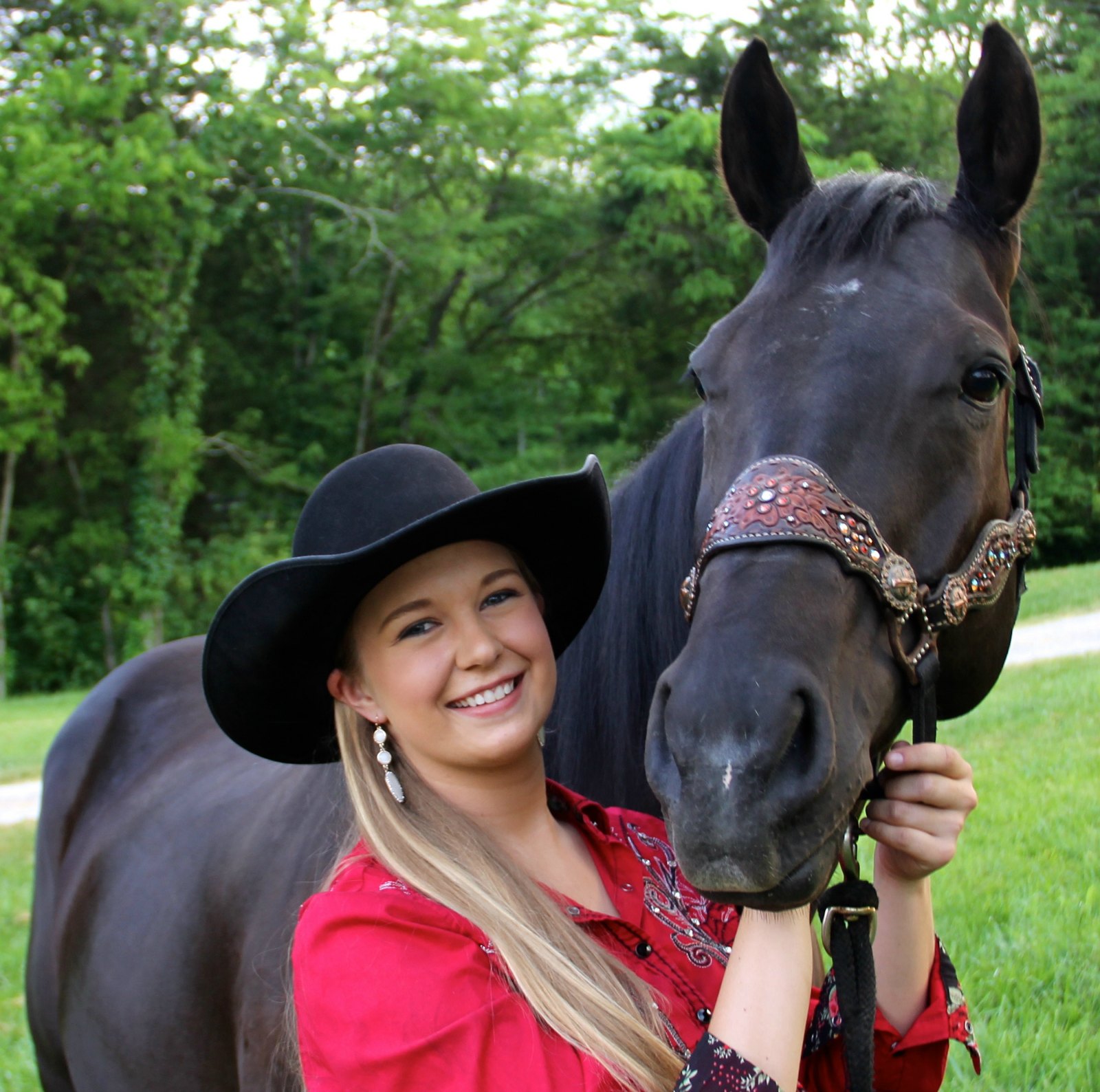 The 19 year old cowgirl began her horse riding career in the hunter/jumper discipline, and after fracturing her skull because of a fall off a horse, her family urged her to quit the jumping discipline, because a repeat injury could have been fatal.

But her granddad, Bill Landers, had a different idea. He suggested that she take up barrel racing.

So she did. That was three years ago, and as soon as she turned eighteen, she turned pro, becoming a member of the Women’s Pro Rodeo Association.

This is the second year she will compete at Franklin, and she’ll ride her seven year old quarter horse named Cash. Just like his owner, Cash has come back from physical ailments. A bad cut on his back leg below the hock was stitched up and healed, but Rae knew something wasn’t right yet. When she ran him at barrel races, he wasn’t running as well as he had previously, even though he didn’t appear lame. “He was shutting me off early,” Rae said. She took him back to the veterinarian, who found an infection only inches from the bone. After being in a cast from hip to foot for a month, Rae gave him eighteen months off to full heal. “We gave him more time off than what was recommended, because I knew this horse was special, and I wanted to make sure he made a full recovery,” she said.

Rae has not pro rodeoed as much this year, because she just finished her first year at Auburn University. Her trainer, Corey Adkins, travels from Franklin with her horses to wherever the barrel racing is, and Rae flies in. After the event, Corey heads home and Rae goes back to school.

She loves the rodeo world. “In the rodeo world, everybody is nice, and everybody wants to get to know you,” she said. “When you go to a rodeo, it doesn’t matter who you are. It’s a family.”

She’s excited to compete in Franklin. “This (rodeo) has a special place in my heart,” and her whole family, including her mom, Chaney Scott, her dad, Sonny Scott, and her sister, Landers, can be there to watch her run, including granddad. “He’s proud of me, every time I run. He’s definitely my rock. He’s my hero.”

Rae, as well as Jessi, will run in slack on Friday morning at 9 am.

The performances of the Franklin Rodeo begin at 7 pm each night on May 14-15-16. Tickets range in price from $10 to $20 and all seats are reserved. Tickets can be purchased online at FranklinRodeo.com or at the gate. For more information, visit the website, call 615-RODEO-11 or find the event on Facebook and Twitter.

Cutline: Jessi Fish is aboard her primary barrel horse, Show Off, a seven year old gelding quarter horse. She will compete in the barrel racing at the Franklin Rodeo this weekend. Photo by Tiffany McGhan.

Cutline: Rae Scott and her horse Cash will run barrels at the Franklin Rodeo this weekend. The Franklin native just finished her freshman year at Auburn University. Photo by Chaney Scott.