ELMONT , N.Y. – Patiently and confidently handled by Ramon Dominguez, Summer Front found room in midstretch and claimed the lead in the final strides to beat Howe Great in Belmont Park ’s Grade 3, $150,000 Hill Prince for 3-year-olds on Saturday and remain undefeated in four starts on turf.

Summer Front left from the rail post and found himself pinned along the hedge as he settled in fourth. Forced to wait behind horses as Howe Great made his bid, Summer Front was angled outside by Dominguez nearing the sixteenth marker and hand ridden to the wire after finding room to get up by a half-length.

“Turning for home, I was concerned about being on the inside,” said Dominguez. “Unfortunately, I had no choice. The one thing that I was very happy about was the way my horse was handling himself. He was on the bridle where he was going to really go, and sure enough when I got him out, he did. A move like that always takes a lot of horse out of you, and I was very impressed with him.”

Christophe Clement, who trains Summer Front for Waterford Stable, said he prepared the son of War Front for such a scenario.

“[Dominguez] worked that horse last Sunday and he worked him behind another horse,” said Clement. “Ramon has always liked that horse and has great confidence in him and obviously knew he was going to get there because he never panicked. He was so cool. That’s the problem with the one draw: sometimes you take the risk of being boxed in, but I’m a firm believer in saving ground, anyway.”

The Hill Prince marked the first graded stakes victory for Summer Front, who had previously won the King Cugat overnight stakes in November at Aqueduct and the Dania Beach at Gulfstream Park in December. The only two losses in his six-race career were a second in the Grade 2 Lexington over Keeneland’s Polytrack on April 21 and an eighth in the Grade 2 Peter Pan on dirt at Belmont on May 12.

Clement said Summer Front likely will remain on grass going forward and said the bay could follow the path used by Gio Ponti in 2008, who followed his win in the Hill Prince with a victory in the Grade 2 Virginia Derby. The 2012 Virginia Derby will be contested on July 21 at Colonial Downs.

“The last time we won this race was with Gio Ponti, so we’re obviously going to think about the Virginia Derby a little bit. That’s what we did, and it worked. I don’t like to compare [Summer Front and Gio Ponti] too much, but it worked in the past. We’ll have to think about it again. I’ve always liked my horse. I messed up by running him in the Lexington and Peter Pan, but I had to try because he really trained well on dirt and it’d be a mistake not to try.”

Film Shot, beaten 1 ½ lengths by the winner, edged Margano by a head to finish third. Spring to the Sky, Our Entourage, Star Channel, Mr. Handsome, Big Screen, and Shkspeare Shaliyah completed the order of finish. Monarchic was scratched. 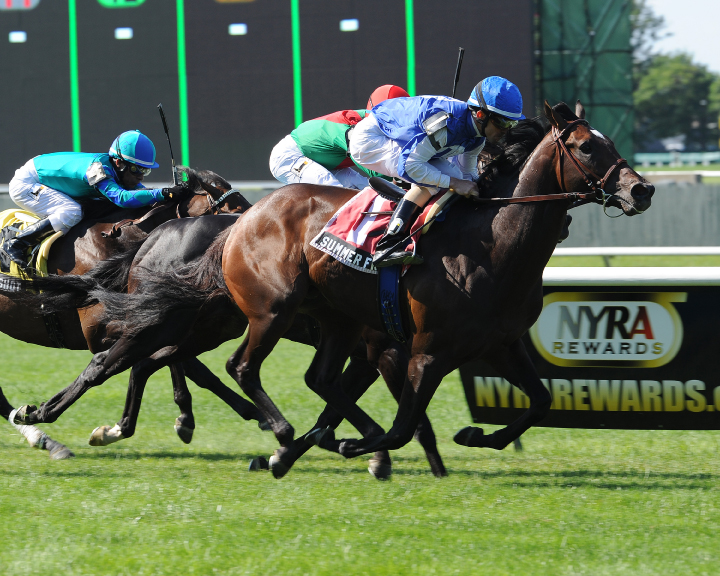