Great Britain’s Dujardin shines, and Peters springs a nice American surprise
by Louise Parkes
Defending champions, Great Britain’s Charlotte Dujardin and Valegro, lived up to expectations when winning the Grand Prix on the opening day of the Reem Acra FEI World Cup™ Dressage 2014/2015 Final at the Thomas & Mack Centre in Las Vegas, USA today. The reigning Olympic, World and European title-holders produced a brilliant test to finish over six marks ahead of The Netherlands’ Edward Gal and Glock’s Undercover, but the big hero of the day was America’s Steffen Peters who lined up third with Legolas just over two marks further adrift.
The home crowd were naturally hoping for strong performances from their two contenders, and, fourth to go, Laura Graves and Verdades were hotly-tipped to give the leaders a run for their money. But it was 50-year-old Peters, winner the last time the FEI World Cup™ Finals visited Las Vegas in 2009, who once again lifted American spirits with a master-class of superb horsemanship.
Tested concentration and nerve
The arena itself is a challenge at the Thomas & Mack Centre, providing only just enough space to fit the dressage boards inside, and the proximity to the crowd tested concentration and nerve. Graves‘ 13-year-old gelding, who has been on fire on the outdoor Florida circuit over the last few months, found it intimidating as her rider pointed out after posting a score of 74.314. “He was at 80% in the warm-up, but he was nervous going in (to the arena) and he was really hot down the first centreline. Luckily we have that extension to get out some of it, but then it just turned into some of our turns – he would get something in his eye, a flash or whatnot – and he just backed-up a little. But he was really obedient, he really tried to be brave, so I couldn’t ask for any more” she explained.
One contender whose nerves definitely didn’t show was the oldest horse in the competition, the 18-year-old Painted Black who was previously ridden by nine-time FEI World Cup™ Dressage champion Anky van Grunsven from The Netherlands, and who is continuing to thrive for new partner, Morgan Barbancon Mestre. The 23-year-old Spaniard produced an extraordinary test, with the stallion apparently on springs through lovely passage and piaffe and giving it his all through extended trot for a score of 73.786.
Whole new level
But once Dujardin and Valegro set sail the bar was raised to a whole new level. The British rider had been concerned about her multiple-record-breaking gelding who she said had been “a bit flat” over the last few days. But when the lights went on the curtain came up he turned into the showman the world has come to know and love. Pounding out his trademark passage and piaffe, strutting his stuff through extravagant extended trot, and producing the most exquisite of pirouettes he soared to the top of the leaderboard with a mark of 85.414, and none of the rest would come near that. 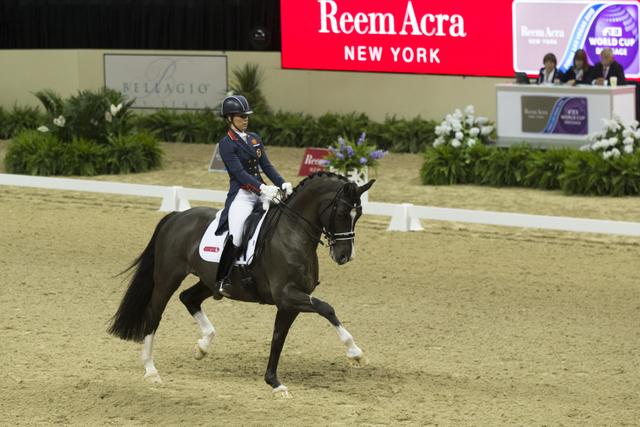 Germany’s Isabell Werth has competed in 14 FEI World Cup™ Dressage Finals and the double-champion can always be relied upon to be competitive, but with a mark of 72.843 with El Santo she had to settle for eighth place today. The main challenge came from the final three, Peters demonstrating his craft by coaxing some wonderful work from the 13-year-old Legolas whose trot-tour was copybook. Posting 76.843 the American was in runner-up spot before Edward Gal and Glock’s Undercover set off.
No-one knew what to expect of this edgy black gelding in this electrifying environment, and he broke into canter in the movement requiring walk to passage. But the quality of the rest of his test was good enough for a mark of 79.057, and once Germany’s Jessica von Bredow-Werndl and Unee BB made some mistakes including fluffing their two-tempis, then  they had to settle for fourth place ahead of Graves in fifth and Barbancon Mestre in sixth.
Photo Caption: Defending champions, Great Britain’s Charlotte Dujardin and Valegro, lived up to expectations when winning the Grand Prix on the opening day of the Reem Acra FEI World Cup™ Dressage 2014/2015 Final at the Thomas & Mack Centre in Las Vegas, USA. (FEI/Dirk Caremans)
Bounced back
Dujardin was delighted that Valegro bounced back today. “He had a massive journey and it hit him as well as the temperature change, but I got on him today and he was all ready to go. I think he just knew what he had to do and that’s what I mean – he just never lets me down!” she said.
Peters was on a high, because he knew his third-place result was unexpected. “It’s a big surprise to a lot of people and myself too!” he said. He competed Legolas in Florida in January “and it didn’t go so well”. The horse had a break following last year’s Alltech FEI World Equestrian Games™ in Normandy, and had only just come back to work. His poor result was a shock. “We got barely 70%, so I knew if we wanted to qualify for Las Vegas we needed to change things drastically” Peters explained, and it seems he left nothing to chance. “He’s had lots of outings and we even went to an event three hours north where there were about 100 people and a lot of noise and atmosphere. We recorded cheering and music, and put it on a five-minute sound-file and played it over the audio system. We prepared a lot, and I’m thrilled because it has worked out beautifully!” he said, and no-one could argue with that.
Strain
Gal said that the trip from Europe was difficult for horses, and not being able to ride for three days while they were in quarantine was also a strain. “But he felt actually quite ok” he said of Glock’s Undercover.. “He was good in training, but today in the walk to passage we made a mistake. Sometimes I find the tension flows away and then comes back up again when I’m riding him, but he did good. A year ago I couldn’t have done what we did today” he said, knowing that his horse is still improving, even at 14 years of age.
With everyone scoring well over the required 60%, all 18 now go through to the Freestyle which will decide the new champion, and with Dujardin and Valegro in sparkling form it seems a back-to-back double is very much on the cards for the wonder-horse and his super-talented rider. But Laura Graves hasn’t given up hope of making a big impression when the Freestyle gets underway at 12 noon on Saturday.
The American who rocketed to centre stage with a fifth-place individual finish in Normandy last summer said this afternoon, “that’s where we’re going to pull out the big guns hopefully! Now having this one (the Grand Prix) under out belt, we’ll have a little school tomorrow, and I know my horse will be more confident on Saturday and then we’ll push the envelope!”
For further information on the Reem Acra FEI World Cup™ Dressage 2014/2015 Final in Las Vegas, USA from 15 to 19 April, visit www.worldcuplasvegas.com or contact Press Officer Marty Baumann, marty@classic-communications.com, +1 508 698 6810.
Result:  1, Valegro (Charlotte Dujardin) GBR 85.414; 2, Glock’s Undercover NOP (Edward Gal) NED 79.057; 3, Legolas (Steffen Peters) USA 76.843; 4, Unee BB (Jessica von Bredow-Werndl) GER 74.843; 5, Verdades (Laura Graves) USA 74.314; 6, Painted Black (Morgan Barbancon Mestres) ESP 73.786; 7, Glock’s Flirt (Hans Peter Minderhoud) NED 73.657; 8, El Santo NRW (Isabell Werth) GER 72.843; 9, Di Lapponia T (Paulinda Friberg) SWE 72.686; 10, Mister X (Inessa Merkulova) RUS 71.343.
FEI YouTube: https://youtu.be/bz3qwSNiJ-4