QUOTES FROM THE POST POSITION DRAW FOR THE 144th BELMONT STAKES

BELMONT, N.Y. – Following are quotes from the connections of the 12 horses entered in Saturday’s 144th running of the Grade 1, $1 million Belmont Stakes at Belmont Park:

Trainer Doug O’Neill: “It’s been an unbelievable ride, and I think we’ve just stayed focused on the whole journey because of the great I’ll Have Another. I have obviously got caught up in some other issues on the side and got cleared of any wrongdoing, still kind of goofy a little bit. But everything’s going good and we every day give thanks to be part of the I’ll Have Another team.” 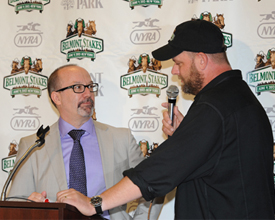 tinued to gallop good, his energy’s been good, his appetite’s been strong, and he’s handled this whole journey as good as you could possibly ask a horse. He hasn’t lost a bit of his flesh at all, his coat continues to shine and look great, so we couldn’t ask for him to be coming in to this any better.”

[On whether he’s talked to jockey Mario Gutierrez about how the race would set up] Not really. We’re going to huddle up and talk; being in the 11th hole, we’re able to kind of see how the pace sets up. If they’re crawling, we’ll hopefully be leading the crawl, and if they’re flying, we’ll be sitting in behind the horses flying.”

“Mario is just such a confident rider and he’s so confident in I’ll Have Another. They get along so well, so we’re in good shape.”

Jerry Crawford, managing partner of owner Donegal Stable on the decision to skip the Preakness to train up to the Belmont Stakes: “Bill Mott told me one time the thing that makes a good owner is that you never disagree with your trainer’s decision. I’m here today as a bad owner. But I think [trainer] Dale [Romans] agrees that it all worked out for the best. If we had won the Kentucky Derby – and we thought we would, the race showed we clearly should have – we would have gone to the Preakness. Having failed to do that, if you examine the genetic code of Dullahan and his sire, Even the Score, it clearly mitigated in favor of giving him some rest and coming here.”

“I don’t think I’ll Have Another, as much attention as he has gotten, has really gotten his full due yet, and the reason is that Ahmed Zayat’s horse, Bodemeister, has just been spectacular in both races, and yet I’ll Have Another has managed to find a way to beat him in both races. Ahmed and I talked with Paul [Reddam] earlier today and told him we’re going to do everything we can to keep him from being a Triple Crown winner, but after what he has already done, and if he gets it done Saturday, he’ll not only be a worthy Triple Crown winner, he will have exceeded all possible expectations.”

“[Former President Bill Clinton] has certainly been invited. He didn’t quite have all of his facts dialed in, but we appreciated his support.”

Owner Phyllis Wyeth: “Obviously, we have been a little disappointed, but we still feel Union Rags hasn’t run his race. We had some problems in the Derby … But we still think he can do really, really well, and we’ve switched jockeys to Johnny [Velazquez], and he just had a really nice work.”

Trainer Michael Matz: “If I had my choice I would have picked a little further out. I think the horse has enough speed to be in a decent position.”

Owner Ahmed Zayat: “He’s more versatile than people think. He can probably do anything, but it looks like we have drawn a nice post. There is a lack of speed, so maybe he’ll be on the lead, but I’m not sure.”

“I don’t think ‘disappointed’ is the right word. Our colt [Bodemeister] ran his heart out in the Derby . It was a spectacular, unbelievable Derby . We have an incredible horse in I’ll Have Another. He’s a true champ. He’s a really, really nice horse. Seeing what I saw, you really appreciate the game more. You know how hard it is. So I really wasn’t disappointed because coming out of a huge race, [Bodemeister] ran another huge race. We were just beaten be a better horse, fair and square.”

“If you asked me personally, I always thought Bodemeister is a very nice colt. Bob Baffert, [from] day 1, thought Paynter was the better horse. He thinks he’s a really, really nice horse.”

Trainer Chad Brown: “I talked to my jockey the other day, Jose Lezcano, and I asked him, ‘Where do you want to be?’ and he said, ‘I like to be inside.’ You can’t get any more inside than that. He got his wish. That’s where he wants to be.

“When it comes down to post position, I’m more interested in what the jockeys want. He wants to be inside, so he’s inside.

“I don’t know that we’re going to take him back. We’re going to let him be where he’s comfortable. He seems to take himself back. If the pace isn’t very fast, I could foresee this horse closer…he’s getting more mature, he’s getting sharper every day I see him training out there.

“I think that he’s going to evolve into a more versatile horse, you’re going to see. Whether it’s Saturday or not, I don’t know, but as he matures, he will.”

Trainer Kelly Breen: “Can I change [the post] (laughs)? No, I think it’s a good post, but I’ll have to talk things over with Ramon [Dominguez] and figure out a strategy.

Owner George Hall: “We think he’s a good horse. We think he’s got some class, and even though some of his races were disappointing, we think he’s shown enough talent that we can make a case that he belongs in the field.”

“Of course we have incredible memories of the Belmont , so just being in the paddock will be a privilege. But, again, we wouldn’t do it just for the sake of doing it if we didn’t think we had a horse with enough class.”

“Post has no bearing for us. I don’t think anybody was upset with it. I think everybody’s happy where they are. It really doesn’t mean a lot here. There’s a long run and big, sweeping turns, so I don’t know that it makes any difference at all.”

Trainer Ken McPeek: “It’s good. I thought maybe we would be better off being outside Paynter, but inside, outside, we’re the two speed horses [referring to Paynter and Unstoppable U], it looks like, so we’ll let that unfold as it may. It’s up to [jockey] Junior [Alvarado, on Unstoppable U].

“The other colt [Atigun] can run from about anywhere. I’m glad he’s inside, because he’s going to need a ground-saving trip to win it.

“Yes and no [on it being fun to be a Triple Crown spoiler with Sarava]. It’s fun winning.

“I think even if we’d have hit the board, it was OK. But yeah, it was kind of neat. It was a good day. Nobody threw any stones at me on the way out. It was fine; I’m a bit bullet-proof, anyway. It was all positive. Not one negative comment from anybody. I think it would have been one thing if we’d have beat him in a photo, but we didn’t. (Triple Crown contender War Emblem was eighth)

“We’re in a good spot in that Unstoppable U is on the inside and the other horse is coming from behind, that works out well. But these horses admittedly are not of the class level of I’ll Have Another, Dullahan, Union Rags. They haven’t proven it at that level. So I really kind of needed to run both of them to have a real shot. “

Anthony Bonomo, Jr., assistant to trainer Dominick Schettino and general manager for owner MeB Stable: “I think I’m very happy with the draw. We were hoping for a 7-8-9, somewhere outside but not too outside, so it worked out very well for us. The horse is doing phenomenal. Our trainer, Dominick Schettino, has been doing a great job with him. He’s been taking his time. We’ve gradually brought him into this race, rested him. He’s in the best shape he can be for this race. I’ve always said Rosie [Napravnik is] one of the top riders in the country. Male or female, as a jockey, she’s one of the top jockeys. By winning the Kentucky Oaks and winning constantly and being a top rider, I think we’ve got a jockey that’s going to really try and do well on him.”

Trainer Manuel Azpurua: “I’m happy with the [post position] I got, six, and we’ll see what happens. We decided to run after the race in Tampa . He had a problem in Tampa . He grabbed his front leg. We took 15 days to do what we have to do and after that he was his old self. We had to give him time.”

“We took our time with him, but he’s come along. I believe we are in good shape now. He’s been doing everything right. We took Alex Solis [to ride] 15 days ago, and he’s liked the way he’s looked. Like I told everybody, we have the black sheep of the race and anything can happen. He’s doing great.”