Ridden by Mike Smith, who had to overcome a cancelled flight returning from Oaklawn Park in Hot Springs , Arkansas , Rumor made it look easy as she engaged the favorite passing the eighth pole and quickly gained the advantage under left handed encouragement.

“The last time I rode her ($86,000 Wishing Well Stakes, Feb. 10) she was just quiet, really really quiet,” said Smith.  “…You know, I’m not too sure Teddy’s Promise ran her race today, but when I saw that she wasn’t really kickin’ on, I thought I had a shot to win it.

“I had a terrible morning.  You don’t know how hard it was for me to get here.  I came from Arkansas this morning.  My flight was cancelled and I’ve been on ‘standbys’ since four this morning.  I’ve never been so happy to catch a standby (flight) in my life.”

With Teddy’s Promise, ridden by Victor Espinoza and 5-2 second choice, Shumoos, with Garrett Gomez, dueling through splits of 22.11, 44.64, Rumor was second, one length behind the favorite with six furlongs run in 1:09.12. 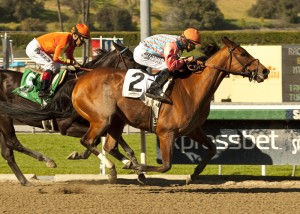 “She broke a little awkwardly out of the gate,” said Espinoza.  “We had to stand there a long time because the other horse (Shumoos) didn’t want to load, so she got a little impatient.  When she broke, she broke to the inside and we got bumped a little bit, and when I grabbed her to straighten her up, that’s when she really grabbed the bridle and wanted to go.

“She never looked like she really extended herself down the hill,” said Mandella.  “I don’t think she liked it…She runs well enough on synthetic.  We might look at the Madison at Keeneland (Grade I, $300,000 going seven furlongs on April 13)…She’s done enough to be a broodmare, but the owners have said if she’s doing well we can keep her racing…We’re in pretty good shape right now.”

Teddy’s Promise, who shook loose of Shumoos leaving the half mile pole, battled gamely for the place and finished 6 ½ lengths clear of Shumoos.  “Teddy” paid $2.60 and $2.10.

No one hit the Pick Six on Sunday, resulting in a carryover into Friday of $94,395.  It is expected the total Pick Six pool on Thursday will exceed $750,000.

First post time for Thursday’s eight-race program is at 1 p.m.