Mizdirection Comes East, Stretches Out for Just a Game

ELMONT, N.Y. – Mizdirection,  winner of eight stakes, including six sprints, will stretch out to one mile and take on a deep cast of competitors in Saturday’s Grade 1, $500,000 Longines Just a Game for fillies and mares on the turf.

Owned by a partnership headed by sports broadcaster Jim Rome’s Jungle Racing, Mizdirection primarily has raced in turf sprints in California, capturing stakes such as the

the Grade 1 Breeders’ Cup Turf Sprint against males in November, and the Grade 3 Las Cienegas on April 13 in her most recent start. She brings a four-race winning streak into the Just a Game.

The 5-year-old also has won going one mile, however, having taken the 2011 Sandy Blue Handicap at Del Mar and this year’s Grade 2 Buena Vista on February 18 at Santa Anita. 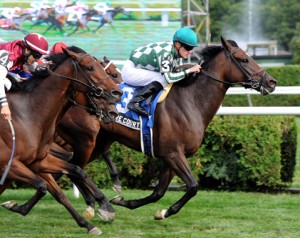 In her lone start in the Eastern time zone, Mizdirection was promoted to third via disqualification in the 2011 Grade 2 Raven Run over Keeneland’s Polytrack.

“It’s a one-turn mile, and it’s a résumé race,” said trainer Mike Puype of the decision to send Mizdirection to New York for the Just a Game. “It’s big money, it’s a Grade 1, and it has a tough field. It would be a great race to win to increase her value. For us, it’s an all-you-can-gain, nothing-you-can-lose race.”

Puype said he is unconcerned about the Just a Game’s one-mile distance, but that he hopes the turf course doesn’t have too much moisture. Mizdirection has raced exclusively on firm turf in her career.

“It’s going to come down to whether she can handle the surface,” said Puype. “If it rains, we’ll be in trouble, but she’ll be tough over firm ground. She beat the boys off a five-month layoff in the Breeders’ Cup, and you can’t do that without being at the top of your division.”

Hall of Fame jockey Mike Smith will ride Mizdirection, 7-2 on the morning line, from post 6.

Mizdirection is one of four Grade 1 winners entered in the Just a Game, the others being Centre Court , Dayatthespa, and Better Lucky.

Centre Court, a two-time graded stakes winner as a 3-year-old, is unbeaten in two starts this year as a 4-year-old. The G. Watts Humphrey, Jr. homebred made three-wide rallies to win both the Grade 2 Honey Fox on March 16 at Gulfstream Park and the Grade 1 Jenny Wiley on April 13 at Keeneland.

“She was pretty good last year, and she was running against the same fillies, with the exception of [Mizdirection],” said trainer Rusty Arnold. “I think she has progressed this year, but I think they all progress at four.”

Like Mizdirection, Centre Court has never competed over a turf course with any moisture in it, but Arnold said she’ll compete on Saturday regardless of the condition of the turf course.

“I don’t know how she’ll handle it because she’s never run on it before, but she’ll run,” said Arnold . “She’ll need to run a very good race. Whoever wins the race will have to run a good race. Anybody can win it.”

Centre Court, 3-1 on the morning line, will depart from post 3 with Julien Leparoux.

Dayatthespa, winner of the 2012 Grade 1 Queen Elizabeth II Challenge Cup and Grade 3 Appalachian against 3-year-olds, seeks her first graded stakes victory of 2013, having defeated New York-breds in the You Go West Girl overnight stakes on May 5 at Belmont Park.

The You Go West Girl was her first start since finishing fifth after jumping a shadow and nearly losing her rider on the first turn of the Grade 1 Matriarch in November at Betfair Hollywood Park .

“I’m hoping she’ll move forward in her second race off the layoff, and she’s a Grade 1 winner in her own right and has a good race record,” said Chad Brown, who trains Dayatthespa for Jerry and Ronald Frankel, et al. “I can see a handful of runners who could win the race, but we’re looking forward to running. The only thing that might prevent us from running is the condition of the turf course. The turf will have to be firm enough for us to run.”

Javier Castellano has the call aboard Dayatthespa, 6-1, from post 4.

Better Lucky, who took advantage of Dayatthespa’s trouble to win the Matriarch, was fourth in the Jenny Wiley, her 2013 debut. She was third to Dayatthespa and Centre Court in the Queen Elizabeth II Challenge Cup and fifth in the 2012 Grade 2 Woodford Reserve Lake Placid , won by Just a Game entrant Stephanie’s Kitten.

After winning the Woodford Reserve Lake Placid at Saratoga Race Course, Stephanie’s Kitten finished sixth in the Queen Elizabeth II Challenge Cup. She returned to win the Grade 2 Distaff Turf Mile by a neck on May 4 at Churchill Downs. The runner-up in that race, Hungry Island , also was entered in the Longines Just a Game.

Saturday’s race will be the North American debut for Laugh Out Loud, who won a Group 2 in France and placed in a Group 1 in England . She has made one start since being purchased by owner Martin Schwartz, faltering when 11th in the Group 2 Prix du Muguet on May 1 at Saint-Cloud in France .