Meg O’Mara of Rumson, NJ, bested a field of 257 junior riders to win the prestigious Pessoa/US Hunter Seat Equitation Medal Finals, presented by Randolph College, at the 67th Annual Pennsylvania National Horse Show on Sunday. It was an emotional time for O’Mara. The announcer just finished naming Lillie Keenan of New York, NY, the Reserve Champion. When she realized that the Championship title was hers, the 18-year-old put her hand over her face to hide her tears.

“I never thought that I would be here,” said O’Mara. “So to be able to win it – I am still in disbelief.”

Judges Bill Moroney and Geoff Teall called back the top 28 riders for the second round and the top four riders were tested further to determine the medal winning positions. The test consisted included a hand gallop, a halt and back, two counter-cantered fences, and a trot fence. The final four were Hasbrouck Donovan of Gainesville, FL, Sydney Shulman of Greenwich, CT, Keenan and O’Mara. All four riders handled the test very well, but the judges used the words “Confidence” and “Brilliance” to describe O’Mara’s performance. Teall said, “Her round fell into place a little bit nicer and she went and did it.”

Confident, is not exactly a word that O’ Mara would have used, admitting that the only time she felt able to breathe was after the test was over. 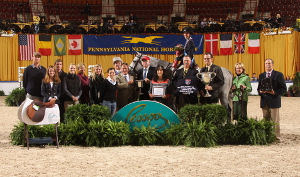 “Before the test started, I started having a mental breakdown for like 30 seconds. I didn’t know what was going on,” said O’ Mara. “But I decided I just had to go out there and ride. I couldn’t freeze, because that’s usually what I do.”

Don Stewart, the trainer of O’ Mara was proud of the way she overcame her nerves. “She’s a fighter for sure.”

Keenan may have finished in the runner-up spot, but she was not complaining.
“I am extremely happy. Just coming here is exciting and getting a ribbon is a huge accomplishment,” said Keenan. “I did what I thought was right at the moment. I have an amazing horse and I was very lucky to ride him.”

Competition at the Pennsylvania State Farm Show Complex in Harrisburg continues through October 20. The Pennsylvania National Horse Show is one of the largest indoor horse shows in the U.S., hosting horses and competitors from across the country with 20,000 spectators attending from the Mid-Atlantic region. With over 1,400 qualified horses competing for $420,000 in prize money, the show features Hunter and Jumper competition and is the site of the $85,000 Grand Prix de Penn National.