FORT WORTH, Texas (Feb. 9, 2013)— Kendra Dickson of Aubrey, Texas, won the $5,000 Jerry Ann Taylor Best Dressed Award at the final championship round at the Fort Worth Stock Show & Rodeo on Saturday, February 9. The award was more than first place winnings in any of the three rounds of barrel racing.

The Women’s Professional Rodeo Association and the National Cowgirl Museum and Hall of Fame presented the award. Jerry Ann Taylor, a 1986 honoree of the hall, was a flamboyant trick rider and roper who was known for her sense of style.

“I was more than thrilled,” Dickson said of her win. “It was a really big deal for us.”

Dickson uses the word “us” deliberately. Her outfit and matching breast collar and belt were designed and put together in less than a day. Hope Schuster, 16, who works at Dickson’s barn, was her assistant and Dickson took her into the arena to help accept the award. Her daughter and one of her school friends also helped.

Hope, Dickson said, has a good eye for style. “She is so patient. She helped me glue all the rhinestones and made some great design suggestions.” 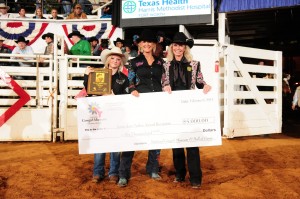 Dickson and her crew started putting her look for the finals together on Friday evening, even though she wasn’t sure she would be one of the top 12 in the finals. They glued all day Saturday, in case she made the final round. Saturday afternoon, Dickson learned she was eleventh and would be competing Saturday night.

“We repurposed an old top that went with an evening gown,’ Dickson said. “We didn’t spend a lot of money, but we made it a fun, family project.”

The award was presented for the first time in December at the Wrangler National Finals Rodeo (NFR) to Mary Walker, and is only presented at the NFR and at the Fort Worth rodeo.

Pam Minick of Fort Worth, a National Cowgirl Museum and Hall of Fame board member and honoree and former WPRA vice president, said Taylor was as comfortable at the symphony as she was on a horse. The purpose of the award is to encourage women in professional rodeo to carry on the tradition of wearing colorful western attire in the rodeo arena.

“Her sense of style was an inspiration,” Minick said. “We owe it to the heritage of the sport to bring this back.”

Dickson, who placed fifth in the first round of barrel racing, ran the second fastest time in the final round and finished fifth overall, winning $7,972 in prize money to go along with the $5,000 Jerry Ann Taylor Best Dressed Award. Before the Fort Worth rodeo began, Dickson had decided to tithe ten percent of any winnings to The Shepherd’s Pantry, a local food bank in her hometown. That charity will receive nearly $1,300 from Dickson.

“This award is an incentive for competitors to up their game and recognize that presentation is important,” Dickson said. “We all need to do our part and promote our sport.”

Barrel racing has a long history with the World’s Original Indoor Rodeo®. The Fort Worth rodeo began holding an invitational ranch girls barrel race in 1955, not long after barrel racing was created.

The Fort Worth Stock Show & Rodeo is known for its tradition and this new award seems a perfect fit, especially since the National Cowgirl Museum and Hall of Fame is located in Fort Worth, next door to the stock show grounds.