Katherine “Katie” Pontone of Red Bank, NJ, and Wicked blazed to victory in the $4,000 North American League Pony Jumper Finals at the Opening Day of the 67th Annual Pennsylvania National Horse Show on Thursday evening. The pair managed the only double clear out of the four that made it into the jump-off. Pontone was surprised with the results.

“I thought it was really difficult,” Pontone said of the course. “So coming here and winning was the best. My mom and trainers helped me so much to get here and Wicked is just the best.” 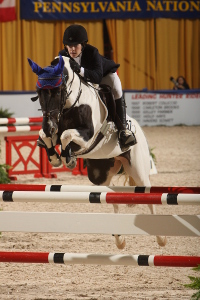 Angela Pollex and Talk About Me were the first to go in the nail-biting jump-off. They were fast, but knocked down a rail for four faults in a time of 35.117 seconds. Christine Lonsdale also had a rail on Winds of Magic, stopping the clock at 33.134. Taylor Cox sacrificed accuracy for speed incurring eight faults with Midnight Heart in a t

ime of 28.834 seconds. All Pontone and Wicked needed to do was go clear, which they accomplished in a time of 37.116. Pontone’s hopes were high, but her expectations were much lower.

“My expectation was to get over the first jump. After that Wicked kind of took over and got the job done,” said the 18-year-old rider. “She tries so hard every time.”

Pontone and Wicked cleared more than a few obstacles on the road to Harrisburg. They began the NAL season two months late because Pontone did not acquire Wicked until June. The 13-year-old mare is blind in her right eye. Yet the pair managed to qualify and enter the NAL Finals as the year end leaders of the division.

This is the last year for Pontone as a Junior rider and her last year competing with Wicked. Although her future plans include competing with a new horse, she hopes they both will return to Harrisburg.

“In a couple weeks I’ll have my last show with her,” Pontone said of Wicked. “Hopefully I will come back here next year with my next horse and hopefully Wicked will be here too with her new owner and I’ll get to watch her go again.”