Wellington, FL – January 22, 2013 – New Hope LLC continued to have a strong presence throughout week two of the Winter Equestrian Festival, impressively climbing the leader board in the Adult Amateur 36-50 Hunter division. Julie Holzberger claimed both the championship and reserve championship titles aboard her horses Pure Giving and Revealed.

“I’m very blessed I must say,” Holzberger commented in regard to owning the two horses. “They’re great. They care, and I think there’s just cohesiveness between both of us, whether it’s Revealed or Pure Giving. It’s a great partnership with both.”

Holzberger says Pure Giving is a fitting name for the Swedish Warmblood that always gives his best effort and puts forth 120 percent every time, including this past week in the Rost Arena. The duo had two first place courses, as well as the fourth place in the under saddle before claiming the top honor in the division. Revealed also had a seamless first place course in addition to two third place rounds, leading to their reserve champion recognition.

Holzberger credits her success to the strong partnerships with her horses, as well as her training partnership with David Belford and Christopher Payne at New Hope LLC. 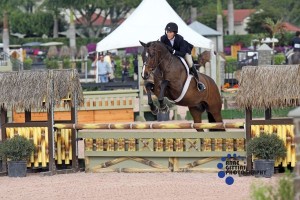 “I’ve been with Chris and Dave coming on almost 10 years. I took 25 years off of riding, and when I went back I started with Chris and Dave,” Holzberger shared. “Honestly, they are the meaning behind how I ride. They put in 200 percent each and every day, and their attention to detail has become second to none. We just have an incredible group that rides together.”

Holzberger concluded, “I don’t think I could do it without Dave and Chris and then my husband’s support for my riding. It really has been great. A support system is really important, whether it’s your trainers, the people you ride with or anyone else. I think those are the important pieces to success.”

David Belford and Christopher Payne have trained some of the country’s top show hunters and are continuously adding numerous accolades to their already impressive record. The team has consistently earned championships at the nations top horse shows, and their inspiring program has helped transform horses, as well as develop some of the sport’s top riders and trainers. For more information please contactpaynecl@hotmail.com.

Photo Credit: Julie Holzberger and Pure Giving captured the Amateur-Owner 36 – 50 Championship during the second week of the Winter Equestrian Festival. Photo By: Anne Gittins Photography. This photograph may only be used in relation to this Phelps Media Group press release.