Fairclough, who was leading after the dressage and marathon phases, stayed ahead of his closest competitor, Misdee Wrigley-Miller (KY) by close to a 35-point spread. With only 2.55 penalty points earned in the cones obstacle course and a cumulative result of 154 penalty points, James Fairclough remained unbeatable this weekend in Bromont.

The FEI2* Horse Pair and FEI 2* Horse Single were won by drivers Chet Halka (NJ) and Sue Weirback (PA), respectively, who both kept their lead throughout the competition.

The competition ended today, Sunday June 21, with the cones obstacle course. All results are available at: http://www.drivingnews.us/results/results2015/Bromont/

The Bromont International Driving would like to thank all its participants, officials, partners and volunteers for the success of the 2015 edition!

Bromont International Driving presented its 14th edition from June 19 to 21, 2015: drivers competed in three different phases: dressage, marathon and obstacle course. Each phase’s goal is to test the different qualities of competing teams. The International Driving is happy to have hosted horse lovers who witnessed the drivers’ abilities, in single, in pair as well as in the spectacular four-in- hand harness. 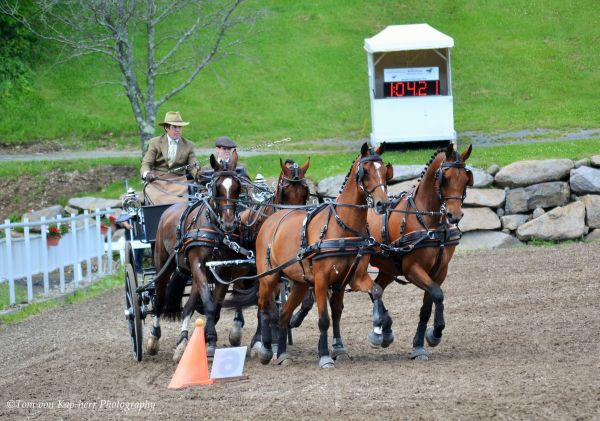