Howard Terpning is one of the most lauded painters of Western art. Over his lifetime he’s received the highest awards in the field, including the National Academy of Western Art’s Prix de West, the Hubbard Art Award for Excellence, the Lifetime Achievement Award from the Autry National Center, and 2005 Masters of the American West Thomas Moran Memorial Award and countless others. He’s an Emeritus member of the Cowboy Artists of America with over forty-one awards from that organization alone. Quite simply, he’s a living master of Western art. 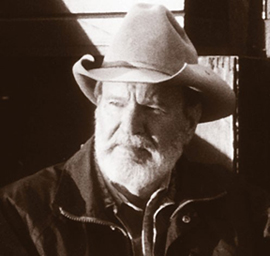 Born in Illinois and educated at the Chicago Academy of Fine Arts and the American Academy of Art, Terpning first gained attention with his dramatic movie illustrations for such classic films as The Sound of Music, Dr. Zhivago and the re-issue of Gone with the Wind. His love of the West and Native American traditions guided his direction as he pursued a fine art career. “The American Indian fascinates me,” says Terpning. “The more I study them, the more intrigued I become. There’s always another story waiting to be told.” 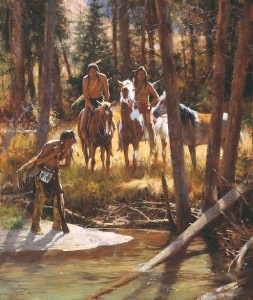 Items from Terpning’s own extensive collection of Indian artifacts often appear in his paintings. His historical accuracy and technical prowess form the firm foundation for his style, earning respect from fellow artists, collectors and the native peoples he depicts.

Original Howard Terpning oil paintings now command top prices at Western auctions. Search for the Renegades, an oil from 1981, recently sold for $1.5 million dollars. Limited edition giclees and lithographs by Terpning often sell out at the publisher as soon as they’re released.

“I think it’s important to tell the story of the Plains Indians because their history is our history…part of our heritage,” says the artist. “I feel privileged to be one of their storytellers.”