Wellington, Fla. (November 9, 2012) – The U.S. will soon engage England in battle, on horseback with mallets in hand at the USPA International Cup as one of the fiercest rivalries in the sport of polo will continue. The highly anticipated intense matchup will take place in Wellington as top men and women from the U.S. and England look to proudly represent their country. Some of the sport’s best international athletes are lined up to participate in the event set to take place at Grand Champions Polo Club, a recognized venue for delivering high quality, competitive polo. The Club will host the international test match that will cap off its impressive high-goal fall season on a high note.

The International Cup is presented in conjunction with the U.S. Polo Association (USPA), polo’s national governing body, and the Hurlingham Polo Association (HPA), the governing body for polo in the UK, along with support of the Museum of Polo and Hall of Fame. The announcement was made this week by Melissa Ganzi, President of the Grand Champions Polo Club.

Players and fans are anxiously waiting for Sunday, November 25, at 1:00 p.m. ET to arrive for the historical rivalry to unfold once again, this time on U.S. turf at the USPA International Cup, an event sanctioned by the USPA. The first of two matches featuring national men’s and women’s teams from the U.S. and England. The men’s match looks to be particularly exciting as the U.S. seeks to avenge a close loss from the St. Regis Cup this spring at Great Britain’s Cowdray Park Polo Club. England took home the win 11-10.5 in a highly competitive match that featured the two evenly-talented teams trading leads throughout the contest.

“We’re thrilled to cap off a successful high-goal season with this substantial international event that will showcase one of the greatest rivalries in the sport,” said Ganzi. “We continually strive to present polo at the highest level and events like this allow us to further elevate the quality of play at the club and continue to demonstrate why Wellington is a top destination of choice for polo in the U.S.” 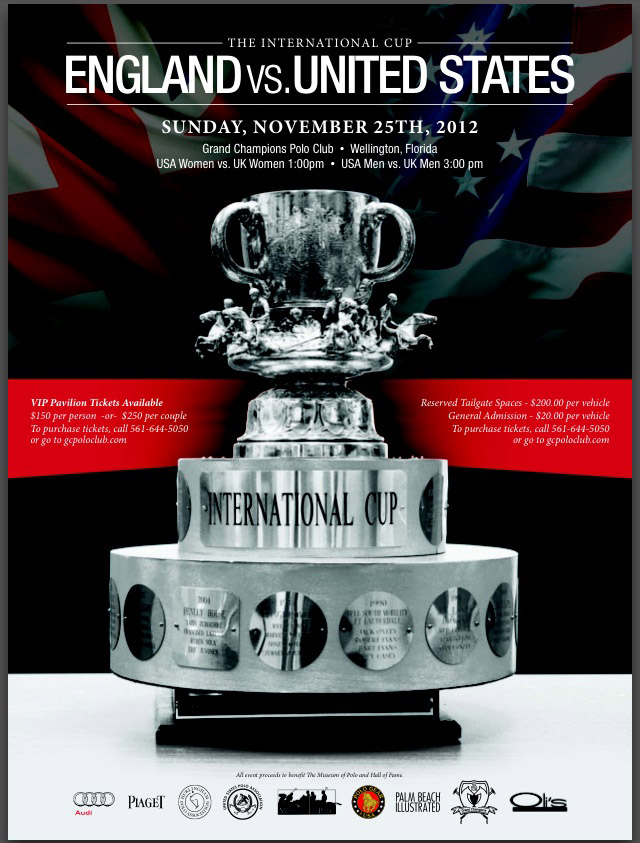 “The timing, location and match up of this event could not be better. A rivalry of this magnitude is a perfect way for players and fans to celebrate the close out of the fall season at Grand Champions Polo Club with some of the very best international competition,” said Peter Rizzo, CEO of the U.S. Polo Association. “Top notch venues like this one continue to help raise the bar on the level of talent and competition taking place in the U.S. each year.”

“It is a great opportunity for our players to experience playing in Florida, one of the great venues for polo,” said David Woodd, Chief Executive of the Hurlingham Polo Association. “Our team is a young one and they will be facing very stiff competition which has both great talent and experience. It has been the policy of the HPA to embrace every chance to play polo at an international level and we very much hope that this follow up match after the St Regis Test Match in England in May will prove to be a fore runner for more Internationals between two great polo playing nations.”

Owned by Marc and Melissa Ganzi, Grand Champions Polo Club organizes polo tournaments throughout the year, with a series of medium and high-goal tournaments in the fall and spring seasons that feature the sport’s top players. The club also features a polo school and youth program oriented at giving all local children the chance to learn and play the sport of polo. In 2011, the club expanded its offerings to include high-goal polo with the addition of the nationally recognized USPA North America Cup and the USPA National Twenty Goal Championship. This is the first year that the International Cup has been played at Grand Champions Polo Club. All admission proceeds from the match will benefit The Museum of Polo and Hall of Fame.

“We’re very proud of what we have accomplished with the addition of high-goal polo at Grand Champions. In addition, working with the sport’s governing body in England and the U.S. has allowed us to bring these important international test matches to our club to help promote the growth of the sport of polo and its fan base,” Ganzi said.

Polo is on the upswing in the U.S. thanks to programs established by the U.S. Polo Association (USPA), polo’s national governing body, to train homegrown talent while also providing opportunities for new players and fans to get involved in the sport. The USPA offers a host of training and learning opportunities through member clubs across the country, Regional Polo Centers, a flourishing Interscholastic/Intercollegiate polo program and the organization’s premier Team USPA development program.

If you would like more information on polo in the U.S., including events and details on programs for new players, visit www.uspolo.org.

About the U. S. Polo Association

The U.S. Polo Association was organized and exists for the purposes of promoting the game of polo, coordinating the activities of its Member Clubs and Registered Players, arranging and supervising polo tournaments, competitions, and games, and providing rules, handicaps, and conditions for those tournaments, competitions, and games, including the safety and welfare of participants and mounts. For more information, please visitwww.uspolo.org.

About the Hurlingham Polo Association

The Hurlingham Polo Association (HPA) is the governing body for polo in the UK, Ireland and many other countries throughout the world. As such, it is responsible for the regulations and rules under which the game is played. This includes the handicapping of any one playing in the U.K. or Ireland, and the fixtures list. The object of the HPA is to further the interests of polo generally and support by all possible means the common interests of its affiliated clubs and associations. For more information, please visit www.hpa-polo.co.uk.