George Stubbs was the greatest of English horse painter, a master whose work stands alone, and who has had a greater influence on sporting painting throughout the world than anyone else who has lived.

Born in Liverpool, the son of a currier, at fifteen Stubbs was apprenticed to Hamlet Winstanley but did not remain with him long, and sought to make a living as a portrait painter in; the north of England,.  By the age of twenty-six he was working in York where, as well as painting, he studied anatomy and gave private anatomy lessons to medical students.  John Burton commissioned him the etch illustrations for this essay “towards a Completer New System of Midwifery, 1751”.  It is suggested that in 1754 he visited Rome.  By 1758 he had moved, with his common-law wife Mary Spencer, to Horkstow, Lincolnshire, where his son George Townley Stubbs (q.v.) was born.  It was here that he began one of the most important phases of his life and indeed the work that has influenced equestrian artists ever since (many modern artists refer to it as their main source of study).  He made an incredible study of the horse’s anatomy by obtaining dead horses which he slug in his studio and then dissected, layer by layer, making drawings of all the stages, showing all aspects, the muscles, the sinews, and the skeleton.  The fantastic work was finally published in 1766 and was called simply “The Anatomy of the Horse” for which he engraved all the plates himself. 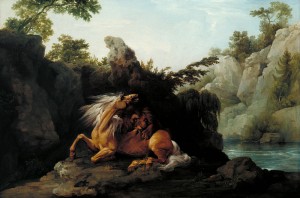 In 1759 Stubbs moved to London where he soon became established as t painter.  His ability to portray both the horse and people, to compose a painting and to paint a landscape, all with such outstanding depth and strength, won him many important patrons including Lords Rockingham, Grosvenor, Richmond, Bolingbroke, Grafton and Portland.  For these and many more he painted beautiful conversation pieces as well as horse portraits and groups.  He was at his peak in the 1760s and many of his famous paintings date from this period including the life-size portrait of ‘Whistle-jacket’, ‘The Grosvenor Hunt 1763’ and many of his mare and foal paintings.  It was also during this period that he exhibited at the FS the first of many pictures on a theme that was to fascinate him for years, that of a lion attacking a horse.  Towards the end of the 1760s he began to experiment with enamels and it was this that brought him into contact with Josiah Wedgwood (1770).  Wedgewood produced tablets for him on which he could work in enamel, and fire in a kiln without cracking.

In some of these enamel studies we see again Stubbs’ favorite subject, a horse being attached by a lion.  Wild animals fascinated him and a number of fine paintings exist of the rare animals that were being imported in to the country at the time for zoological study.   His work with enamel also influenced his work with oils and he began to use more and more glazes mixed with his paints to give stronger and greater effects.  It is these glazes that are so at risk when cleaned by a clumsy restorer, and many of his later works have been spoiled as result.  He first exhibited at the RA 1775, where he was rather looked down on by the academicians who categorized his as an animal painter, not a respected from of artist at that time, but he was elected ARA in 1780, and RA in 1781.  Subsequent to his election a rule was made stating that he and all others must present a diploma work to the RA for full election.  He resented this, and refused or neglected to send one, and as a result his election was annulled, although he always maintained he was entitled to the rank. 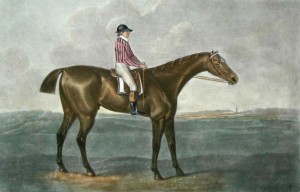 In the 1780s Stubbs painted his famous farming scenes and seemed to turn further away from the establishment.  He also returned to engraving producing original creations rather than reproductions.  But these were not a great commercial success.

In the 1790s Stubbs was commissioned by the Turf Review to paint a series of portraits of famous racehorses.  The series was not completed, only sixteen portraits being produced.  He also worked on commission for the Prince of Wales during the 1790s, but work from this period is scarce, probably because in 1795 he decided to commence another vast study of anatomy which was to be the comparative anatomy of a man, a tiger and a chicken:  he died before it was completed.   Stubbs was an artist far ahead of his time and far ahead of any other English horse painter.  It is interesting to note that despite his extensive anatomical studies even he could not understand the movement of the horse’s canter and his horses are depicted in rocking-horse gait.

The Dictionary of the British Equestrian Artists:  Sally Mitchell, 1985