ARCADIA , Calif. (Sept. 30, 2012)—Slim Shadey, freshened following a disappointing run in the Grade I Eddie Read Stakes at Del Mar on July 21, pulled jockey Garrett Gomez to the lead in the Grade II, $150,000 John Henry Turf Championship at 1 ¼ miles and never looked back, wiring a nine-horse field by 2 ¼ lengths while getting the distance in 1:59.17.

“Simon (trainer, Callaghan) wanted me to be laying close with him, if not, then just off the horse on the lead,” said Gomez. “Today he was fresh and he really caught me unexpectedly…I had trouble getting him to settle into a good stride. He kind of just pulled me around there and stretched me out pretty good, but he still finished well and that’s a plus. “We’ll regroup and hopefully be ready for the Breeders’ Cup.” Slim Shadey carved out interior fractions of 24.02, 46.92, 1:10.53 and 1:34.44. Off as the second betting choice at 3-1, he paid $8.40, $3.80 and $3.40. Trained by Callaghan and bred in England by his owner, Phil Cunningham, Slim Shadey’s run in the Eddie Read came just two weeks after he had run fifth as the 2-1 favorite in the Grade I, 1 3/8 miles turf United Nations Stakes at Monmouth Park, leading Callaghan to characterize “Slim Shadey’s Del Mar effort as “flat,” which resulted in the freshening that preceded the John Henry. Callahan said that Slim Shadey’s next start will come in the Breeders’ Cup Turf at 1 ½ miles on Nov. 3 at Santa Anita. “He’s shown that he’s a very good horse today and we’ll look forward to the Breeders’ Cup now,” said Callaghan.
A 4-year-old gelding by Val Royal, Slim Shadey earned $90,000 in winning the John Henry, padding his career bankroll to $508,600, from a record of 22-4-4-0. Turbo Compressor, off as the 3-2 favorite and expected by many to make the early John Henry lead, sat a comfortable second under Joe Bravo and though he tried, could never threaten the winner. “When you come in as the favorite, everybody is going to gun for you,” said Bravo. “I thought he was going to make up the ground at the top of the lane but the winner just had too much left.” Trained by Todd Pletcher, Turbo Compressor last started at Saratoga on Aug. 18, running ninth and last at 2-1 in the Grade I Sword Dancer Stakes, which followed a win in the Grade I United Nations at Monmouth. Turbo Compressor paid $3.00 to place and show. Argentine-bred Interaction settled of the early pace and rallied through the stretch to be third with Victor Espinoza, 1 ½ lengths behind Turbo Compressor and 3 ¾ lengths back of the winner. Off at 10-1, he paid $4.80 to show. Bourbon Bay , the 4-1 third choice in the wagering, didn’t show his customary speed and finished next to last with leading rider Rafael Bejarano. Santa Anita will kick off a five-day race week on Thursday, as there will be special Columbus Day racing on Monday, Oct. 8. First post time each day will be at 1 p.m. 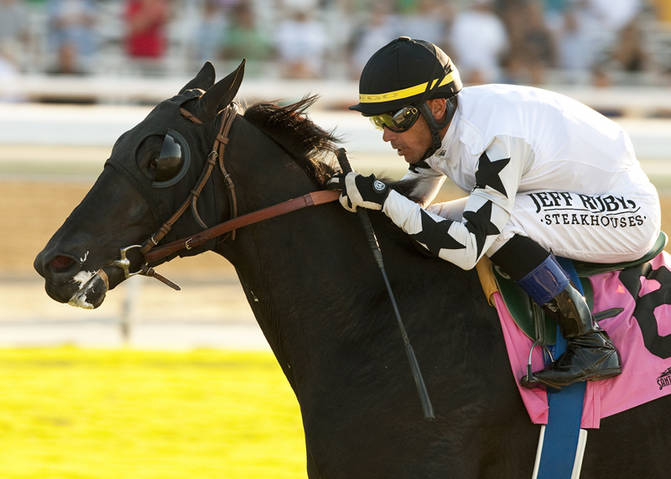