LAS VEGAS – Winning back-to-back gold buckles is a feat in and of itself.

In this era of ProRodeo, repeating as world champion after earning that title for the very first time is almost unheard of.

Feild, who finished the regular season in first place, has padded his lead by winning more than $50,000 over the first four nights of the NFR, and on Sunday he earned his second go-round victory. Feild spurred Classic Pro Rodeo’s Kattle Katie to 87 points. 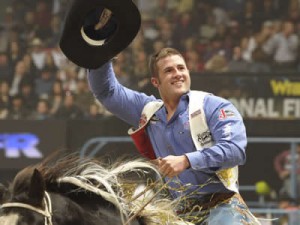 “The horse really helped me out,” the Payson, Utah, cowboy said. “My feet felt like they were up to my ears. I’m happy with the way it turned out.”

Feild put $18,257 in his pocket, boosting his lead in the world standings to nearly $30,000 over three-time World Champion Will Lowe. Feild also leads Lowe by six points in the average race.

“I just put all that stuff to the side,” Feild said. “You’ve got to get it out of your head, or you’ll get bucked off.”

In tie-down roping, Cooper regained the world lead in what has been a seesaw battle with Justin Maass over the first four nights.

The Decatur, Texas, cowboy roped and tied his calf in 7.8 seconds to grab his second go-round victory of this year’s NFR.

“I had a better draw than most people tonight,” Cooper said. “I forgot how good (my horse) Roanie is. I left too early coming across the line, so I slowed down hard to readjust and let the calf get out. Most horses, when you pick up and idle like that, rear up. Roanie slows down and stays low to the ground, so she helps me out a lot.”

Five-time World Tie-down Roping Champion Cody Ohl is the only man in the event to successfully defend his first gold buckle – doing so in 1997-98 – since Phil Lyne accomplished the feat in 1971-72.

Cooper, who leads the average race with a total of 30.7 seconds on four, enters the fifth round with a $13,402 lead over Maass.

Cooper and Feild sit second and third, respectively, in the race for the Ram Truck Top Gun Award, given to the highest NFR earner in a single event. The leader is barrel racer Mary Walker, who has $54,772 in earnings despite not placing on Thursday night. Sherry Cervi posted her 20th NFR go-round victory – good for second all-time to 11-time world champion Charmayne James (25) in barrel racing – with a 13.67-second run.

Saddle bronc rider Jesse Wright didn’t have to share the round victory this time. One night after splitting the round-three title with his twin brother, Jake, Jesse took home top billing with the NFR’s first 90-point saddle bronc ride.

Wright posted 90 on Frontier Rodeo’s Wild Bill and added to his world standings lead, now more than $33,000, over Wade Sundell.

“It just took me falling in the dirt (in Round 2) for me to remember why I’m here and what I’m doing,” Wright said. “Now I’m just back to having some fun and riding broncs with my buddies.”

The second-round no-score did cost Wright, but he’s battled his way back to seventh in the average race, which is led by the oldest Wright brother in the field, Cody.

Three-time World Steer Wrestling Champion Luke Branquinho likely fell out of the average race on the rodeo’s first night when he took a no-time, but that has only seemed to motivate the Los Alamos, Calif., man. 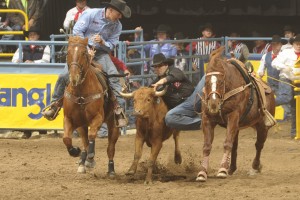 Branquinho earned checks in both the third and fourth rounds, then won Sunday’s go-round with a 3.3-second run.

“I’m still trying to win as much money in the go-rounds as I can,” the three-time world champion said. “Missing that steer in the first round, that happens. You just go at them one at a time.”

The fastest run of the rodeo thus far also gave Luke Branquinho a record 21 NFR go-round victories in steer wrestling, a mark he previously shared with Ote Berry. Branquinho is attempting to become the first steer wrestler to win back-to-back world titles since Berry did so in 1990 and 1991.

The bulldogging competition remains one of the tightest of the NFR, where the top five competitors are separated by less than $13,000 – a gap that can be made up in a single night. Two-time World Champion Dean Gorsuch leads the race for the gold buckle, while Casey Martin sits fifth, but is first in the NFR’s average race.

NFR rookies Dustin Bird and Paul Eaves won the fourth round of team roping with a 3.9-second run.

“I’ve been thinking about this for a long time,” said Eaves, from Millsap, Texas. “I’ve kind of struggled for a few years getting started, so having a chance to make this kind of money and get ahead is great.”

“We didn’t have as much pressure on us as you might expect because we had already had a great year,” said Bird, from Cut Bank, Mont. “Everything we can do here feels like a bonus.”

One night after suffering a perineum contusion, bull rider Clayton Savage soldiered through to win the fourth round. The Casper, Wyo., cowboy was one of just two bull riders to make the whistle on a night when the top 15 bull riders in the world were pitted against the “eliminator pen” – the toughest bulls in the business to ride. Savage rode Rafter H Rodeo Livestock’s El Capitan for 78.5 points. 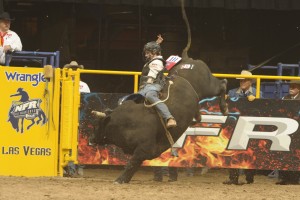 “I do hurt pretty good, but man, going to pick up that buckle is going to cure about all of it,” Savage said. “I just had to block out the pain and I’m ready to ride some more.”

Another attendance mark was set at the Thomas & Mack, as 17,578 turned out for the performance on Memorial Night, the highest-attended fourth round in NFR history. The fifth of 10 performances takes place at 6:45 p.m. Monday night.