No Enigma About It, This Team is on Fire

In its battle with Merchant Hub, Enigma took the mystery out of how to win a closely-matched polo game: teamwork. Merchant Hub made some fine collaborative plays and managed to keep Enigma on its toes throughout the match. But in the end, it all came down to the clean, well-oiled Jeff Hall/Matias MacDonough machine, with the right amount of torque supplied by patron Jerome Wirth and Carlucho Arellano. Eight-goalers Hall and MacDonough made 10 of the team’s goals, with three contributed by Arellano. 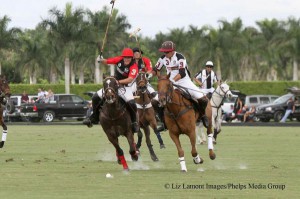 Enigma’s formula – which Hall said after the game had remained unchanged throughout all six chukkers – worked over and over again. Whenever Hall and MacDonough needed backing, Arellano or Wirth seemed to materialize on the spot. The first display of that dynamic came in the second chukker, with the game tied at 3-all. It was grace in motion, with Hall gliding down the field all by himself and working the ball along the side, while Wirth kept the defenders away so he could shoot and score. It was a nice open hustle by the entire team. Holding a one-point lead (4-3), Enigma promptly slapped in two more goals, one a deft shot by Arellano and the other a penalty conversion by MacDonough. With the tie broken, the slate

was never to be even again. The second chukker ended with a three-point lead for Enigma (6-3). Merchant Hub cranked it up and tightened the gap between Enigma several times in the second half, but it just wasn’t enough to break through the “wall of Hall” – who, incidentally, was playing with a separated shoulder he incurred in practice before Enigma’s first game last week. “I fell and drove it in (to the ground. It still hurts, but it’s getting better every day,” he said, adding with a laugh that there are “no substitutes in polo anyway!”

The first half ended with Enigma leading 8-4, thanks to Hall and MacDonough each pounding one in and Facundo Obregon scoring one for Merchant Hub on a penalty conversion. Hall earned the goal with some fancy footwork. He snatched control of the ball at the sideboards, flipped a U-turn, took out the defenders and scored. Merchant Hub rallied, and Obregon made an impressive three goals in chukker four. With the opponents gunning for him – and on one play Escobar almost in his lap – Hall wasn’t able to score in the fourth or fifth chukker.

The fourth ended with Enigma maintaining its lead, 10-7. Merchant Hill tightened the gap, closing out the fifth chukker at 11-10. At the top of the final chukker, for a brief stretch it was anyone’s game. Both teams came out fighting hard and never let up. Hall had the final word, scoring the deciding goal of the day. On that play, Escobar scooted the ball down the boards from midfield, only to have MacDonough swoop in and run off with it. Hall yelled “Tranquilo! Tranquilo!” (“Take it easy!”).to MacDonough, who handed the ball off to him for a goal.

How did Enigma do it? Said Hall: “We just managed to stay on top of them. They’re a tough team, a super team. And we’re still kind of finding our rhythm; this was only our second game together. I like (our) team; it’s meshing well, and every game just gets a little bit better, and the shoulder feels a little bit better. We’re a real defensive-minded team, so if you stake your defense, you know the plays will come.”

And indeed they did. Enigma patron Wirth was thrilled with how the team handled it. “I’m very, very happy,” said a beaming Wirth. “This was our first victory in the U.S., which for me was quite a great achievement, just after two games. And that was a very good team, a tough one,” he said of Merchant Hub. “So I’m happy twice. But congratulations to them, because they made us fight ’til the end.”