LAS VEGAS – A record crowd at the Thomas & Mack Center felt like it was seeing double.

The 17,702 fans in attendance set a mark for the largest third-round crowd in Wrangler National Finals Rodeo history Saturday night, and Jesse and Jake Wright gave them something to cheer about by becoming the first twins to share a round victory in NFR history.

The Wrights split the round victory in saddle bronc riding, posting identical – even though the brothers aren’t – 87-point scores.

“I wouldn’t want to split a round with anybody else,” said Jesse Wright, who padded his lead in the world standings by winning $16,343 with his ride aboard Frontier Rodeo’s Let Er Rip. “The money is great either way, so it’s nice that we both get some. Tonight was outstanding for both of us.” 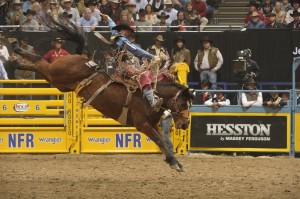 Jake Wright entered the 10-night rodeo in eighth place, but has soared to fourth on the heels of three checks in three nights, including back-to-back shared round titles. This one came aboard Bar T Rodeo’s Big John. “Last night I said that I’d split first all night long as long as it was with good company and my brothers,” said Wright, one of three NFR-qualifying saddle bronc riding brothers from Milford, Utah. “But money is the last thing on my mind right now because I’m just having a great time being here and sharing this with my brothers and soaking it in.”

Jesse Wright was bucked off in Round 2, but holds a $22,645 lead over second-place Wade Sundell with seven performances remaining.

In tie-down roping, Justin Maass snared back the world standings lead that he lost just one night earlier, but it was five-time World Tie-down Roping Champion Cody Ohl who stole the show with the 46th round victory of his career.

Ohl caught and tied his calf in 7.1 seconds, nipping Maass by just one-tenth of a second and reminding the rodeo world that this is anything but a two-man race to the gold buckle.

“I didn’t get off to a very good start; my first two rounds this year didn’t go that good,” Ohl said. “My calf (Friday) night was a little off pace, and it took a lot of time to get him tied up real strong. Now, I think I’ve got myself a shot here. I’m just going to have to get after it and give it all it takes.”

It was Ohl’s 43rd round title in tie-down roping – three more came in steer roping – adding to the event’s career round-victory record that he already owned. 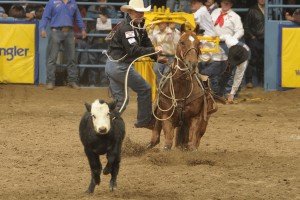 Maass pulled back ahead of reigning World Champion Tuf Cooper by $145.

Like Maass, bull rider Cody Teel had seen his world standings lead evaporate over the first two nights at the NFR, but the Kountze, Texas, cowboy regained it by winning the third round with an 88-point ride on Kesler Rodeo’s Whiskey Jack.

“I feel great about what I’ve been able to do so far, but I’m staying level-headed about it,” Teel said. “You can’t get too high or too low in this sport because things can change real quick. But I feel like now I have some momentum, which is very important in bull riding.”

Teel now leads three-time World Champion J.W. Harris by $467. But it’s NFR rookie Beau Schroeder who leads the average. He and Teel are the only two bull riders who have made the whistle in their first three attempts and Schroeder has racked up 254.5 points. 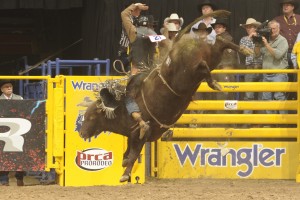 Mary Walker’s stunning stretch at her first NFR continued as she won the barrel racing for the third straight night.

The Ennis, Texas, cowgirl and her horse, “Latte,” turned the cloverleaf pattern in 13.69 seconds. She leads the race for the Ram Top Gun Award, given to the competitor who wins the most money in any one event over 10 nights, at $54,772.

The three-time world champion continues to put pressure on world leader and reigning World Champion Kaycee Feild. Feild tied for third in the third round and leads Lowe by $11,723, though Lowe, from Canyon, Texas, isn’t necessarily thinking about it at this point.

“You can’t look at it that way; we still have seven more rounds,” Lowe said. “It’s going to be a race to the end. You just go day by day.”

Erich Rogers and Kory Koontz put together the first sub-four-second team roping run of the NFR, winning the third round in 3.9 seconds.

“This is my 19th NFR; saying that makes me feel old, but it never gets old to take that victory lap,” said Koontz, from Sudan, Texas. “When you make a run like we did tonight, there’s no feeling at any other place we go that can compare to that kind of rush.” Saturday’s check was the first of the NFR for Rogers and Koontz, and they weren’t alone among the night’s round-winners in that department. In steer wrestling, Wade Sumpter finished in the money for the first time with a first-place check worth $18,257.

The Fowler, Colo., cowboy entered the event ranked No. 2 in the world, but failed to post a time in the first round, likely ruining his chances of winning the all-important average championship in the bulldogging race. Sumpter’s best chance to remain in contention for a gold buckle is to grab as many go-round checks as he can from here on out.

“You’re always trying to be aggressive here and the start [of each run is] so important,” Sumpter said. “The first night I got a good start and I just kind of went after that steer too much and we kind of collided out there, and it turned out bad.

“Tonight, I just had to pin my ears and go at him and be as fast as I can, because that’s about all I have for the next seven nights.”

Two-time World Champion Dean Gorsuch continues to lead the world, ahead of Ethen Thouvenell, Sumpter and Casey Martin, who leads the average race through three nights.

The NFR continues with Sunday’s fourth round, which begins at 6:45 p.m. at the Thomas & Mack Center.