Even though he was born with a handicap, he doesn’t look for sympathy.

After the umbilical cord wrapped around his hand during pregnancy, the Gruver, Texas cowboy was born with a left arm two inches shorter than his right arm, fingers that aren’t fully functional, and an elbow joint that didn’t form correctly.

But that doesn’t stop him from doing what he wants.

This week, he’s competing at the International Finals Youth Rodeo in Shawnee , where he bucked off his first bronc and made a qualified ride on his second bronc.

The dysfunctional arm doesn’t stop him. “Ever since I was little, dad’s made me do everything, just like everybody else,” Colten says. He began riding ponies, then big horses, and competes on his family’s Working Ranch Cowboys Association team, as the ranch bronc rider, cow mugger, and sorter. He’s been roping since he was three years old, and as the family lived on various ranches in Kansas , Colorado , Arizona , and now Texas , he helps by riding pens and doctoring cattle.

And at school, he’s won honors on the sports field. Colten made first team district linebacker last year, and his football team was co-district champions. In FFA, he’s involved in horse judging and welding.

He also competes in Region 1 of the Texas High School Rodeo Association, winning third place in the saddle bronc riding this year and second place last year, and at the state finals, finishing fifth in the state this year and seventh last year.

Colten and his family made regular visits to the Shriners Hospital in Houston when he was young, and they were helpful, he says. And the family’s church has also been helpful.

And his family is very supportive. “Me and my dad are real close, and me and mom are real close. Our whole family, we’re a real close family,” he says. He has a younger brother, Wesley, who is 15, and a younger sister, Sarah, who is 13.

After he graduates from Gruver High School in 2013, he hopes to attend Texas Christian University and earn a degree in ranch management.

And don’t feel sorry for him. “I’d rather not have sympathy. It makes me feel worse. I want to be treated like everybody else.”

He is the son of Clint and Sammy Jackson.

The world’s richest youth rodeo, the International Finals Youth Rodeo, wraps up with the short go-round on Friday, July 13, when 2012 champions will be crowned. For more information, visit www.IFYR.com or call 405.323.0177. 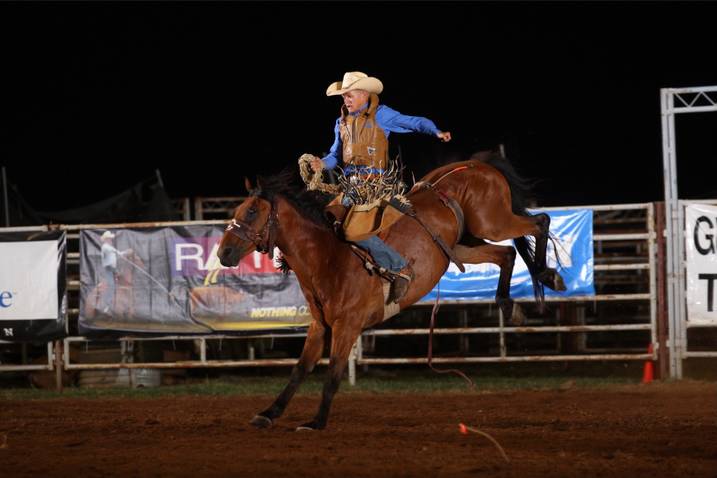 Photo Caption: Texas cowboy Colten Jackson rides a bronc at the 2012 International Finals Youth Rodeo in Shawnee . He is one of about 850 youth competing at the world’s richest youth rodeo July 8-13.  Photo by RodeoBum.com/IFYR.