BALTIMORE, 05-16-13—The undercard on Preakness Day offers more than $1 million in stakes purses with the $300,00 Longines Dixie Stakes (G2) serving as the centerpiece. Pimlico’s oldest stake, the Dixie was first run in 1870 as the Dinner Party Stakes and was won by the horse Preakness, who is the namesake of Old Hilltop’s signature race.

At 1-1/8th miles on the grass, the Dixie has attracted a stellar 13-horse field and a host of big-time trainers, including Orb’s conditioner Shug McGaughey, a two-time Dixie winner. They agree that the lineup is a tough one.

“This sounds like a very solid race to me,” said McGaughey, who won the Dixie in 1993 with Lure and in 2009 with Parading.

“It’s going to be very competitive,” added Graham Motion, another two-time winner of the Dixie who will saddle Howe Great. Motion prevailed with Dr. Brendler in 2003 and Better Talk Now in 2006.

“When you put up that kind of money, they will come,” said Hall of Fame trainer D. Wayne Lukas, who has Optimizer, the 7-2 favorite, and Sky Ring (12-1) ready to fire.

Returning are the 2012 runner-up, local campaigner Humble and Hungry, representing Sagamore Farm, and the third place finisher Forte Dei Marmi, who is trained by Roger Attfield. 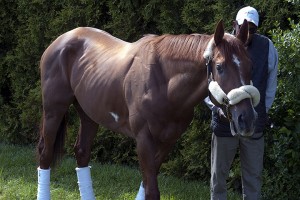 McGaughey’s entry, Imagining, the 5-1 third choice, has been galloping well over the Pimlico surface since accompanying Orb from Churchill Downs and will be making his second start this year. His first outing was a 3-1/2 length score against allowance company at Keeneland.

“He ran in Canada last summer and then we had to give him some time off,” said McGaughey. “He has been doing real good.”

Motion’s Howe Great (12-1) is coming off a similar victory – at 1-1/8th miles on Keeneland’s turf against allowance runners after “being in an awkward spot”, to finish off the board in a Grade 3 at Gulfstream Park.

Lukas pointed to Optimizer as “doing very well” after running a game second following a poor start in the Grade I Turf Classic at Churchill Downs two weeks ago. “He’s one of these horses who come back well and I’ve got the hottest rider in the country (Joel Rosario).”

There are three other races on the card which are graded and which have $150,000 purses.

The Maryland Sprint Handicap features 10 top sprinters, including Sage Valley (5-2), who returns from a layoff as the probable favorite. Action Andy (6-1) has on the board finishes in nine of his last 10 races, while Manito (10-1) steps into the stakes ranks off a four-race winning streak.

Out-of-towners Summer Applause and Brushed by a Star figure to be the favorites in the Allaire DuPont Distaff Stakes with streaking locals Moon Philly and Daydreamin Gracie looking for the upset.

A pair of Chad Brown trained runners Pianist and Samitar headline the Gallorette.