ARCADIA , Calif. (Feb. 13, 2013)—A winner of the Grade I La Brea Stakes going seven furlongs on Dec. 26, Book Review was then a sharp second in the Grade II La Canada Stakes going a mile and a sixteenth on Jan. 20, and she’ll try that distance again on Saturday as she heads a six-horse field in Santa Anita’s featured Grade II, $200,000 Santa Maria Stakes for older fillies and mares.

Trained by Bob Baffert, the 4-year-old Kentucky-bred daughter of Giant’s Causeway will again be ridden by Rafael Bejarano, who has been aboard in her last two starts after being transferred from New York-based Chad Brown in December.

“The West’s (owner/breeders, Gary and Mary) wanted to see the horse run here and this race really looked like the logical spot for her,” said Baffert following Book Review’s neck victory in the La Brea.

Although Baffert went on to label her “a late running sprinter” following the La Brea, Book Review was bet to the 7-5 second-choice in the La Canada, and was second-best when beaten 2 ¾ lengths by the John Sadler-trained More Chocolate.

A minor stakes winner in New York at a mile and a sixteenth with earnings of $624,955 and a record of 11-5-3-1, Book Review is likely to be favored in Saturday’s Santa Maria .

Trainer Jerry Hollendorfer, who will be represented by three horses in the Santa Maria; Lady of Fifty, Going for a Spin and Snow Fall, is holding a strong hand himself. 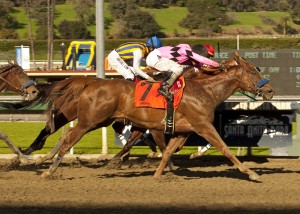 Lady of Fifty, who was fourth as the 6-5 favorite in La Canada, has six wins from 12 starts, with her most recent triumph coming two starts back in the Grade II, 1 1/16 miles Bayakoa Handicap on Dec. 8, which she won by 3 ¼ lengths under Martin Garcia.

Although she steadied under Garcia going into the Club House turn in the La Canada, Lady of Fifty appeared to have a good trip when beaten 4 ¼ lengths.  Keen early in her Bayakoa win, she has ample early speed.

Owned by Hollendorfer or Todaro, Lady of Fifty, a 4-year-old Kentucky-bred filly by After Market, has banked $329,000.  She’ll be ridden for the first time on Saturday by Joe Talamo.

Claimed for $40,000 by Hollendorfer on May 24, Going for a Spin, a 5-year-old California-bred mare by Minister’s Wild Cat, has won three minor stakes for Hollendorfer, including her most recent race, the $46,000 Pennies From Heaven Starter Handicap at 1 1/8 miles on grass.

Going for a Spin has a 6-1-0-4 mark on dirt and should be placed forwardly by new rider Edwin Maldonado, who replaces Rafael Bejarano, who has ridden her to a pair of victories in her last three starts.  Bejarano will stick with probable favorite Book Review.

Like her stablemate Going for a Spin, Snow Fall comes off a win in her last start, the $75,000 added Paseana Handicap at 1 1/16 miles on Jan. 13.  Off at 5-1, the 5-year-old Kentucky-bred mare by War Front pressed the pace and drew clear to win by 3 ¼ lengths under Tyler Baze, who rides back on Saturday.

Owned by Abruzzo or Taylor or Saufley, Snow Fall had been with trainer Graham Motion in Kentucky prior to her Southern California debut in the 6 ½ furlong Kalookan Queen Stakes on Dec. 29, a race in which she finished second, beaten 5 ¼ lengths, by Grade I winner Teddy’s Promise.

Comebacking Gary Stevens, who swept last weekend’s stakes, the Grade II San Marcos on Saturday and the $75,000 added Wishing Well on Sunday, will try to keep the added-money ball rolling with longshot Great Hot, who is trained by A.C. Avila.

A well-beaten fourth in the Paseana Handicap on Jan. 13, the Brazilian-bred Great Hot has a ready supply of back-class for Stevens to draw upon.  A winner of  Keeneland’s 2011 Grade II Raven Run Stakes at seven furlongs, Great Hot was third in the Grade I Lady’s Secret Stakes going 1 1/16 miles at Santa Anita in October, 2011.

Winless from 10 starts last year, she had three seconds and two thirds.  A 5-year-old mare by Orientate, Great Hot is owned by her breeder, Coudelaria Jessica.  With an overall mark of 20-4-3-5, she has earnings of $417,927.

A Group III winner on grass in her native Peru, Private Affair, who overcame a 13-month absence to win a classified allowance race going 1 1/16 miles on turf at Betfair Hollywood Park on Nov. 22, comes off last-place effort going 1 ½ miles in the Grade II Hollywood Turf Cup on Dec. 15.

A 6-year-old mare by the Private Account stallion Privately Held, Private Affair has demonstrated an ability to run well when close to the pace or rallying from far off it—on turf.  Although winless, she has three second-place finishes from four starts on dirt.

The complete field for the Santa Maria, which will be run as the fourth on a 10-race program Saturday, with jockeys and weights in post position order:  Great Hot, Gary Stevens, 118; Book Review, Rafael Bejarano, 118; Private Affair, Hector Berrios, 118; Going for a Spin, Edwin Maldonado, 118; Lady of Fifty, Joe Talamo, 123, and Snow Fall, Tyler Baze, 118.