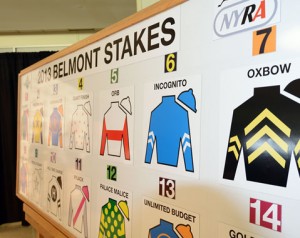 Trainer Shug McGaughey:  “I just didn’t want to get down on the inside where maybe we might get stuck around the first turn, like we sort of did in the Preakness. I said middle, and that’s pretty much the middle.”

“I think, on paper, there is going to be a bit of a pace, so he’ll be able to kind of drop out of it and dictate what he wants to do. If there isn’t, and they’re going in :49 and some change, then he can be laying up there. I just hope he has some place to go when the time comes.”

Trainer D. Wayne Lukas: “I think we overanalyze [the post position draw] a lot. It’s nice for the press to have something to write about today, but, really, at a mile and a half with that long run and the sweeping turns, we have a tendency to overanalyze the post position draw. I’m more concerned about who is around me and what they’re going to do than what gate we got.”

Trainer Todd Pletcher: “We were kind of hoping Unlimited Budget would draw toward the outside. I think Palace Malice, maybe, will show some speed, so we’re happy to be outside of Freedom Child and Oxbow.”

“I think [the 1 ½-mile distance] will suit [Revolutionary] well. He’s a horse who turns off really easily. I think he’ll settle in the first part of the race. That’s important if you’re going to get the mile and a half.”

Owner Mike Repole: “Todd and I spoke about Unlimited Budget being on the outside. She got the 13 post. I actually like Palace Malice is on the inside [of her]. I think he’ll go and she’ll follow him. We wanted Midnight Taboo and Overanalyze inside the top eight, and [Overanalyze drew post 3 and Midnight Taboo drew post 8].”

Trainer Tom Albertrani: “I think we were hoping to get a little farther toward the middle, but we dealt with post 1 in the Peter Pan, so we’ll just deal with post 2 in the Belmont . I don’t know if he’s the kind of horse that wants to be behind horses, because he’s got a free-running style. He’ll probably want to find himself clear into the first turn, whether he has to use himself a little bit into the turn like he did in the Peter Pan when he broke real slow and worked his way to the front. It just depends on how he leaves there. He’ll just have to work his way on the inside there and see where he ends up.”

Trainer Dallas Stewart: “He’s a colt that handles everything that’s thrown at him. We’ll just see. Hopefully, he’ll be able to save some ground somehow, some way, and we’ll see what happens. It’s a bit of a challenge from post 14, but he’s the type of horse that’s met a lot of challenges.”

Trainer Rudy Rodriguez: “I think we’re in very good shape. We’ll see. I think we got a good draw; we’ll just hope for the best. At least we didn’t get the outside. I didn’t want to be all the way outside, so it’s good. It should be OK.”

Owner David Wilkenfeld: “I think for a mile and a half, it’s fine. The key is that he relaxes, more than anything.”

Trainer Kiaran McLaughlin: “I’m just happy there’s 14 in there, and I’m one of them. I don’t have any worries about the post. He’s battle-tested, so we’ll hope for the best, and hope that his pedigree kicks in at the quarter pole.”

Trainer Ken McPeek: “We’re sending from the inside. Absolutely. He needs to be near the front. We’re sending.”

Trainer Anthony Dutrow: “That’s fine with me. I don’t see it being a factor anywhere from [post] 4 through post 12.”