SAN ANTONIO, Texas (Feb. 13, 2013) – J.R. Vezain from Cowley, Wyo., and Sterling Smith are the most successful contestants in bracket three at the San Antonio Stock Show Rodeo and even though they come from different ends of the arena, the duo have a lot in common. 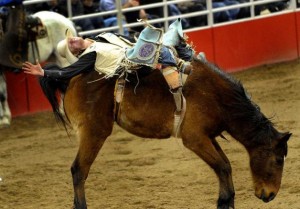 Smith helped Vernon College win the national men’s team title in 2003. He earned the PRCA tie-down rookie title in 2007 and while he hasn’t qualified for the NFR yet, he has improved his standings each year since he joined. He finished in 28th in 2012. A big win here could help him achieve his goal of being among the top 15 that qualify for the 2013 NFR.

History could very well have been made Wednesday night at the AT&T Center in the saddle bronc riding as there was a four-way tie for first place. It’s not unusual to have ties in a rodeo, but four men winning first and splitting the money equally is never expected.

All four men got on horses owned by Harry Vold Rodeo Company and each of them scored 80 points and won $1,228. Cole Elshere, from Faith, S.D., who won here on Tuesday rode Blue Swan to bring his total earnings to $3,193 so far. The other three men earned their first checks in this bracket so will be hoping to add enough to their earnings to advance to the semi-finals on Thursday night. They include Dustin Flundra from Pincher Creek, Alberta, who got on Matterhorn; Cody DeMoss from Heflin, La., riding Painted Fudge; and Luke Butterfield, Ponoka, Alberta, on Cactus Flower.

Chandler Bownds, from Lubbock, Texas, is having a great time here in the AT&T Center. He finished at the top of the leaderboard on Wednesday with an 88-point ride on Burch Rodeo’s Popeye. This was the second bull he rode and brought his total earnings to $3,439, so he is looking forward to the semi-finals with one more bull to get on Thursday.

Bownds has just returned to competition after missing much of 2012 from injury. Under the direction of the Justin Sportsmedicine Team, he had surgery last June in Philadelphia where his groin muscle was reattached to his pelvis. He missed last year’s NFR after qualifying in 2011 but is well on his way back in 2013. Even though it is early in the season, he has earned enough money to put him in fifth place in the world standings. Every dollar he earns here will add to that and if he stays healthy fans should get to see him in Las Vegas next December. 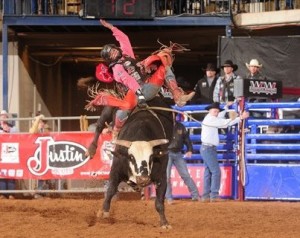 There is one performance at the Professional Rodeo Cowboys Association Eight-Time Large Indoor Rodeo of the Year on Wednesday at 7 p.m.  Complete results can be found at http://www.sarodeo.com/rodeo/results/2013-rodeo-results.