ELMONT, N.Y. – American Pharoah will attempt to become the 12th Triple Crown winner and first since Affirmed in 1978 when he contests the 147th running of the Grade 1, $1.5 million Belmont Stakes on Saturday at Belmont Park.

The third leg of the Triple Crown is the highlight of the Belmont Stakes Racing Festival presented by DraftKings.

With an approximate post time of 6:50, American Pharoah’s date with destiny will air live on NBC as part of a 2 ½-hour broadcast beginning at 4:30 p.m. NBC Sports Network will also provide coverage of the day’s racing, which includes five Grade 1 races in addition to the Belmont.

The 1 ½-mile Belmont, carded as race 11 on a 13-race program, will be involved in a multitude of guaranteed pools. The race will be the final leg of a Guaranteed $300,000 Daily Double starting with the Belmont Gold Cup Invitational on Friday, and a $1 million Pick Six, and $1.5 million Pick Four on Saturday.

Since Affirmed capped off his historic run 37 years ago, 13 horses have won the Kentucky Derby and the Preakness Stakes only to have the “Test of the Champion” elude them. American Pharoah’s Hall of Fame trainer, Bob Baffert, has sent out three of the 13: Silver Charm (1997), Real Quiet (1998), and War Emblem (2002).

“I’m reminded every year of Real Quiet and Silver Charm,” said Baffert, who trains the homebred for Zayat Stables. “[American Pharoah] is a different horse than they were. You really don’t know until the whole series is over how good the horses are. I’m just hoping I brought the right horse here, but we won’t know until halfway into the race.”

Many with imposing resumes have tried and failed. 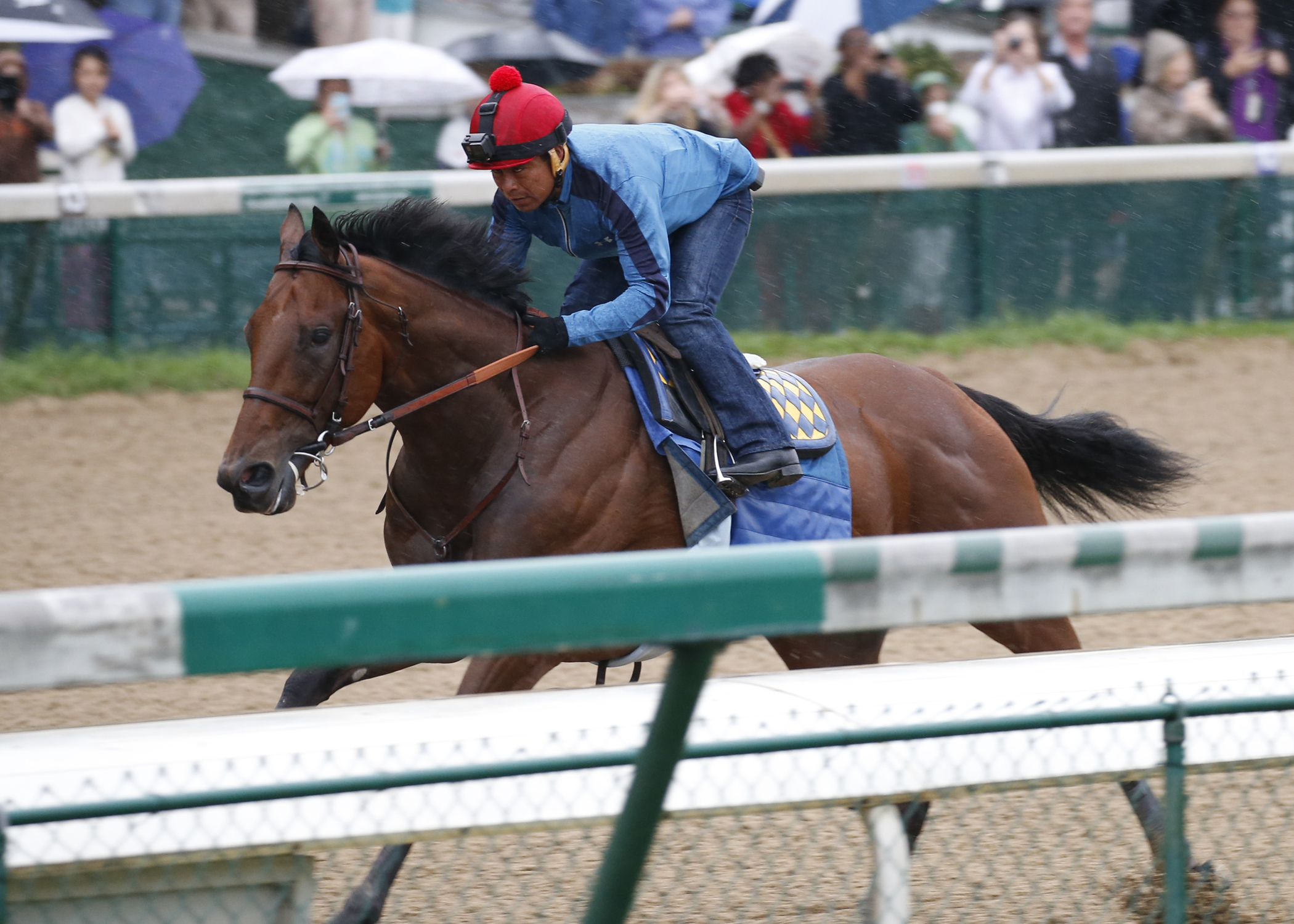 Real Quiet was defeated by a nose at the hands of his arch-rival Victory Gallop, whom he had beaten in the first two legs of his Triple Crown run. The uber-popular Smarty Jones was denied in the 2004 edition of the Belmont by 36-1 longshot Birdstone. Four years later, the seemingly invincible Big Brown was eased in the stretch in his Triple Crown attempt.

Most recently, in 2014, California Chrome had his bid for the Triple Crown thwarted by Tonalist, who returns to the scene of his greatest triumph earlier on the June 6 card in the Grade 1, $1.25 million Metropolitan Handicap.

Now entering the Belmont on a six-race win streak, all in graded stakes, American Pharoah wasn’t always on the path to stardom. His career began inauspiciously on August 9 at Del Mar, when he finished fifth as the 7-5 favorite in a 6 ½-furlong sprint. But his fortunes changed quickly when, one start later, he became a Grade 1 winner by taking the Del Mar Futurity by 4 ¾ lengths.

The son of Pioneerof the Nile made it back-to-back Grade 1 wins with a 3 ¼-length score in the FrontRunner at Santa Anita Park, but the race proved to be the final start of his 2-year-old campaign after he was forced to miss the Breeders’ Cup Juvenile because of a foot injury. Despite his absence from the premier juvenile race in the country, American Phaorah was named Champion 2-Year-Old Male.

Returning on March 14 at Oaklawn Park in his 3-year-old debut, American Pharoah picked up right where he left off, splashing home to victory in the Grade 2 Rebel by 6 ¼ lengths. He then dominated in his final prep for the Kentucky Derby – the Grade 1 Arkansas Derby at Oaklawn – winning by eight lengths under wraps at the finish.

His brilliance earned him the role of favorite in the “Run for the Roses,” and the bay colt ran true to his odds, prevailing by a hard-fought length over Firing Line after a wide trip. The victory wasn’t as mesmerizing as his past romps, but it proved he could get in a dogfight and come out on top.

In the Preakness, American Pharoah delivered a memorable performance. A severe thunderstorm erupted minutes before the race leaving the track a sea of slop. Breaking from the rail, American Pharoah was urged to the front by his rider, Victor Espinoza, and was pressured through fast early fractions. Grade 3 Lexington winner Divining Rod took a run at him leaving the far turn, but the bay colt remained resilient, drawing off to a seven-length score.

“He’s a horse I’ve never had to talk people into how good he is,” said Baffert. “I’ve been wowed by the way he trains all winter and in the spring, and he continues to show his stuff. When I lead him over, I sort of feel like I have an edge, but coming in here and going one-and-a-half miles, it’s a completely different story. We don’t know how any of them are going to handle it because none of them have been that far. We just hope and dream from here on out.”

American Pharoah, listed as the 3-5 morning-line favorite, will again be ridden by Espinoza, who was aboard War Emblem and California Chrome for their Triple Crown runs. The duo will depart from post 5 against seven rivals.

Trainer Todd Pletcher, who earned his first Classic victory in the 2007 Belmont with filly Rags to Riches and won the race again with Palace Malice in 2013, will saddle two runners: Madefromlucky and Materiality.

Madefromlucky, owned by Cheyenne Stables and Mac Nichol, will hope to follow the path Tonalist took to his Belmont triumph. In his last start, the chestnut son of Lookin At Lucky won the Grade 2 Peter Pan at Belmont, just as Tonalist did before upsetting California Chrome.

Alto Racing’s Materiality enters the Belmont off a troubled fifth-place finish in the Kentucky Derby. The son of Afleet Alex, who won the 2005 Belmont, was unbeaten heading into the Derby and coming off a 1 ½-lengths victory in the Grade 1 Florida Derby, for which he earned a Beyer Speed Figure of 110.

Pletcher had considered entering the bay colt in the Preakness, but ultimately decided to keep him in New York.

“With those kinds of decisions you just never know, but with the downpour and everything [at the Preakness], I was happy we were safely at home,” said Pletcher, who finished second a very close second in last year’s Belmont with Commissioner.

Kentucky Derby fourth-place finisher Frosted will go out for trainer Kiaran McLaughlin and Godolphin Racing. The son of Tapit made a dramatic turnaround earlier this year to win the Grade 1 TwinSpires.com Wood Memorial by two lengths on April 4 at Aqueduct Racetrack.

Entering the Wood, the 3-year-old colt was coming off a confounding performance in the Grade 2 Fountain of Youth at Gulfstream Park, in which he appeared poised to win before fading rapidly in the stretch.

“The Wood was a really satisfying win for the whole team because of all the time and effort, and all the times we watched the Fountain of Youth and tried to figure out what happened,” said McLaughlin, who sent out Jazil to victory in the 2006 Belmont after a fourth-place finish in the Derby. “We ran good [in the Derby] breaking from a wide post in an 18-horse field and going six wide on the far turn. And we wish there was more pace. He ran a great race, but we were a little disappointed; we wanted to win.”

Frosted, 5-1 second-choice on the morning line, will leave from post 6 with Joel Rosario in the irons.

Preakness runner-up Tale of Verve will give trainer Dallas Stewart his third chance in as many years at Belmont glory. The Charles Fipke homebred entered the Preakness off a solitary maiden win, but charged home to be second at odds of 28-1.

“We’ve been good, but we’ve got to get it done. We’ve got to march over there and get it done,” said Stewart, who finished second in a Triple Crown race for the third straight year. “I think he’s a horse that’s really bred for the distance. He can take it. He’s got the stamina, he’s got the pedigree. I think he’s got the ability, so it’s going to be a real good race for him. I’m feeling real good about it.”

Standing at 15-1 on the morning line, Tale of Verve will be ridden by Hall of Famer and three-time Belmont winner Gary Stevens from post 2.

Bred in Ireland and based predominantly in the United Arab Emirates, Mubtaahij will go out for globe-trotting trainer Mike de Kock off an eighth-place finish in the Derby. The Dubawi colt dominated in the Group 2 UAE Derby, winning by eight lengths before making his North American debut in the Kentucky Derby, in which he was beaten 9 ½ lengths by American Pharoah.

Keen Ice, seventh in the Derby, will represent Kentucky-based horseman Dale Romans and Donegal Racing. The son of Curlin has only a maiden win to his credit, but closed strongly after enduring a difficult trip in the Derby. He was beaten 8 ¾ lengths by American Pharoah.

Two-time Belmont winner and Hall of Fame trainer Nick Zito will saddle longshot Frammento, who was most recently 11th in the Derby. History is on Frammento’s side, as both of Zito’s Belmont wins spoiled Triple Crown bids – first with Birdstone then again with Da’ Tara in 2008 – but the chestnut colt has yet to win a race since breaking his maiden on October 4 at Keeneland.

With the field for the Belmont set, American Pharoah’s legacy hangs in the balance. Baffert is cautiously optimistic.

“We know we’re against it. This is a very tough race with a lot of very nice horses in it. Like Pat Riley said, ‘In championship games there is winning and there is misery,’ so that’s what we’re looking at right now,” said Baffert. “I’m soaking it in. It’s exciting. I never thought I’d be back here again in this position, but the way he won his races, and then the Preakness, he was so dominating that day. When he’s right, he likes to dominate. He’s that kind of horse. Hopefully, he can bring it one more time.”