LEXINGTON, KY (March 31, 2015) – Qatar Racing’s Peace and War was made a lukewarm 3-1 morning-line favorite in a well-matched field of seven entered Tuesday for the 78th running of the $500,000 Central Bank Ashland (G1) for 3-year-old fillies going 1 1/16 miles over the main track Saturday.

The race offers 170 points toward qualification to the 141st running of the $1 million Longines Kentucky Oaks (G1) with 100 points going to the winner, a total that would ensure a spot in the Churchill Downs starting gate in a field limited to the top 14 point earners. The Central Bank Ashland is scheduled to go off at 5:20 p.m. ET as the ninth race on Saturday’s 11-race card. First post time is 12:35 p.m. for the program that features four other graded stakes, two more of which are Grade 1s: the Toyota Blue Grass and the Madison.

Peace and War will be making her first start since winning the Darley Alcibiades (G1) here last fall. Trained by Olly Stevens, the Keeneland sales grad was sidelined by a minor injury after the Darley Alcibiades and missed a chance to run in the 14 Hands Winery Breeders’ Cup Juvenile Fillies (G1).

Julien Leparoux, who was aboard for the Darley Alcibiades victory, has the return call Saturday and will exit post position three.

Angela Renee won the Chandelier (G1) at Santa Anita last fall for trainer Todd Pletcher. In her 2015 debut, she finished fourth in the Rachel Alexandra (G3) at Fair Grounds.

John Velazquez, who won the 2001 running of the Central Bank Ashland on Fleet Renee, has the riding assignment Saturday on Angela Renee, who will break from post position four. 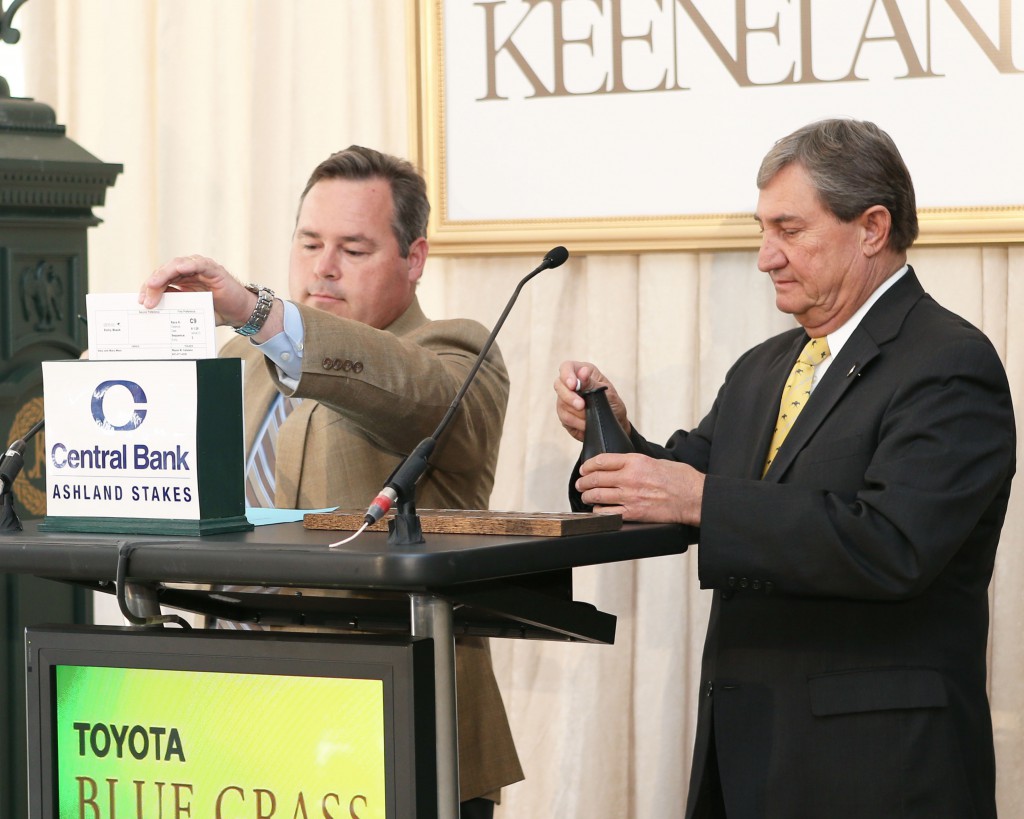 Trained by Larry Jones, Lovely Maria also exits the Rachel Alexandra, in which she finished second to stablemate I’m a Chatterbox. Kerwin Clark, who has been aboard the filly in all six of her starts, has the call Saturday and will break from post position six.

The Rachel Alexandra also represents the most recent start for Gary and Mary West’s West Coast Belle, who finished sixth in that race. Trained by Wayne Catalano, West Coast Belle will be ridden by Shaun Bridgmohan and break from post position seven. Last year, Catalano enjoyed a dead-heat victory in the Central Bank Ashland with Room Service.

West Coast Belle, listed at 4-1 on the morning line, won her first three starts, with two coming in stakes at Churchill Downs, the Rags to Riches and the Golden Rod (G2).

Also listed at 4-1 is Wachtel Stable, Brous Stable and Meadowland Thoroughbreds’ Lassofthemohicans. Trained by Brendan Walsh, Lassofthemohicans finished fifth in the Davona Dale (G2) in her most recent start Feb. 21. Paco Lopez retains the mount and will break from post position one.