2018 AS THE JOHNSON CONTROLS INDIVIDUAL REINING COMPETITION FINALISTS ARE DETERMINED

It was silver for Team Belgium and bronze for Germany. In the first Individual Qualifier, the top 15 placed horse-rider-combinations officially claimed their spot in the finals which will be held on Saturday, September 15. Once the competition was over, an impressive 221 score, or higher, was needed to qualify.

Today, the second Individual Qualifier, presented by Johnson Controls, counted the 19 riders — representing 13 National Federations — who had posted a 217 or higher on Wednesday. The battle for the opportunity to compete in the Individual Competition was on as soon as the first competitor made his way into the TIEC Indoor Arena. Australia’s Warwick Schiller set the pace, and put the pressure on, by performing to a 220. The enthusiastic fans in the stands soon found out that the score would not be enough to make it to the finals as, six horses later, Italy’s Pierluigi Chioldo and Gun At The Gate (owned by Antonio Zagaria) raised the bar. After nailing all the maneuvers requested by pattern #5, the duo scored a 222.5 which was equaled by young Axel Pesek of France riding his mother’s Uncle Sparky. The two riders gained their spot to vie for the FEI individual medals and were joined by Mirko Midili of Italy aboard his ARC Sparkle Magnetic, who closed with a 221.5, as well as Uruguay’s Gabriel Diano riding Magnum Starlights (owned by Antler Ridge Ranch LLC), and Italy’s Mirjam Stillo riding Ruff Spook for owner Shannon Reid who both posted a 221.
Leaving the best for last was Martin Mühlstätter. The Austrian rider, last to perform, entered the show arena determined to post a 221 or higher, the score necessary to join his fellow-qualifiers. With Michael Garnett’s 2010 sorrel Amercian Quarter Horse stallion Blo Gun between the reins, he painted his circles, showed off his horse’s amazing ability to spin fast, and set the dirt flying in his stops. His performance was paid back by the judges with a 223, the top score of the day. “The humidity here was the biggest issue, but it was hard for everyone and without a doubt this is a great place to be,” said Mühlstätter who also represented his country in the Team Competition. “In the first qualifier my horse was good but I was not ‘on’. Things just didn’t click but today everything was flowing better. My horse has a big big heart; he gave me everything he had and I apologized to him that he had to give me one more run. I honestly did not expect such a high level of competition here and I am proud to be part of this great group of athletes that is showcasing our discipline at this level.”
On Saturday some of the world’s best reiners will be leaving their mark in Tryon fighting for a spot on the equestrian world’s most prestigious podium!
Click here for the results 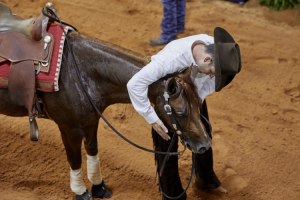 Austria’s Martin Mühlstätter congratulates his stallion Blo Gun after an amazing performance to qualify for the final of the Johnson Controls Individual Reining Competition at the FEI World Equestrian Games™ Tryon 2018 with top score of the day. (FEI / Liz Gregg)