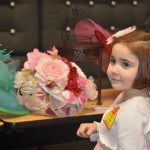 Maddie Wright Our hearts were stolen by the 2013 Child Ambassador, Maddie Wright, an incredible 5 year old from Murfreesboro, TN.  Maddie greeted guests, told us about how the Monroe Carell Jr. Hospital nurses and volunteers make such a difference in her stay at the hospital.  She danced to the music of Doc Holladay and admired the beautiful hats on display.

Albert Menefee hosted the introductions of the 2013 Honorary Co-Chairs, Dr. Monty McInturff and Dr. Margaret Rush.  Dr. Margaret Rush is the current Chief of Staff and Executive Medical Director at the Monroe Carell Jr. Children’s Hospital at Vanderbilt in Nashville, TN.  Dr. Monty McInfurff is the co-owner of  the premier equine medical and surgical care hospital, Tennessee Equine Hospital, located in Thompson’s Station, TN.  Dr. Monty has been a part of the Iroquois Steeplechase since 1982 and was asked and accepted the official position of  Track Veterinarian in 1991.  Unfortunately, Dr. Monty was unable to attend the luncheon. Featured Artist, Lee Baskerville from Virginia, showcased his work “Kinetic Energy”.   “Kinetic Energy” depicts a horse and his jockey set against the recognizable backdrop of the Iroquois grounds.

You can not have an Iroquois Steeplechase event without beautiful hats.  Stacey Rhodes, Stacey Rhodes Boutique, did not disappoint the luncheon guests.  Stacey showcased both women’s and men’s hats for the upcoming racing season from Carol Carr, Palm Beach, and Jon Lee, New York.

Held on the second Saturday of every May at Nashville’s Percy Warner Park, the Iroquois Steeplechase is the premier spring race event in American steeplechasing and Music City’s traditional rite of spring – typically attracting more than 25,000 spectators. Since being designated in 1981 as the official charity of the Iroquois Steeplechase, the Monroe Carell Jr. Children’s Hospital at Vanderbilt has received more than $9 million from the event proceeds. For information on advance ticket purchases, corporate and hospitality tents, and tailgating and RV spaces, visit www.iroquoissteeplechase.org or call (615) 591-2991.