TEETH OF THE DOG DIGS DOWN IN DWYER

ELMONT , N.Y. – Once again, trainer Michael Matz found himself in the winner’s circle at Belmont Park with a talented 3-year-old as even-money favorite Teeth of the Dog held off Fast Falcon to take Saturday’s Grade 2, $200,000 Dwyer by a neck.

Following a brief scramble for the early lead, Teeth of the Dog was settled into second by jockey Joel Rosario behind Morgan’s Guerilla, who took the field through an opening quarter-mile in 22.99 seconds and a half in 46.12. Racing between the pacesetter and Zetterholm on the far turn, Teeth of the Dog stuck a nose in front approaching the quarter-pole and was in command turning for home. Targeted in deep stretch by the closing Fast Falcon, the Bluegrass Cat colt dug in and prevailed after a hard-fought battle through the final furlong.

“When [Fast Falcon] came to me, he was game,” said Rosario , newly transplanted from California . “He kept fighting and gave 100 percent.”

“He’s a pretty darn game horse, that’s for sure,” said Matz, who on June 9 saddled Union Rags to victory in the Grade 1, $1 million Belmont Stakes and Teeth of the Dog to win the Easy Goer overnight stakes on the undercard. “He ran a real nice race, and I’m proud of him. This is a class horse.”

The victory, his first in a graded stakes, lifted Teeth of the Dog’s record to 3-1-2 from seven starts, including a third in April’s Grade 1 Resorts World Casino New York City Wood Memorial at Aqueduct Racetrack prior to his fifth in the Grade 1 Preakness on May 19. The winner’s purse of $120,000 pushed his earnings to $326,250 for owner Jose Singer.

With Union Rags being pointed to the Grade 1, $1 million Travers at Saratoga Race Course on August 25, Matz said possibilities for Teeth of the Dog include Saratoga’s Grade 2 Jim Dandy on July 28 or the Grade 2 West Virginia Derby at Mountaineer Racetrack on August 4.

“He’s run three races in six weeks, so we’re going to give him a little bit of a break right now,” said Matz.

The 1 1/8-mile Jim Dandy also could be an option for runner-up Fast Falcon, who was six lengths ahead of early pacesetter Morgan’s Guerilla in his first graded stakes appearance for Hall of Fame trainer Nick Zito.

“He showed he belonged,” said Zito of the 11-1 shot, who had finished second to Teeth of the Dog in the Easy Goer. “Our horse looks like he’s going in the right direction. We’re happy about him. It’s too early to say, but we’ll talk about the Jim Dandy and some other options.”

Completing the order of finish were Zetterholm, Guyana Star Dweej, and Unstoppable U. Monarchic was pulled up just before the three-eighths pole with a non-displaced condular fracture of the right foreleg. He was vanned back to the barn for further observation. 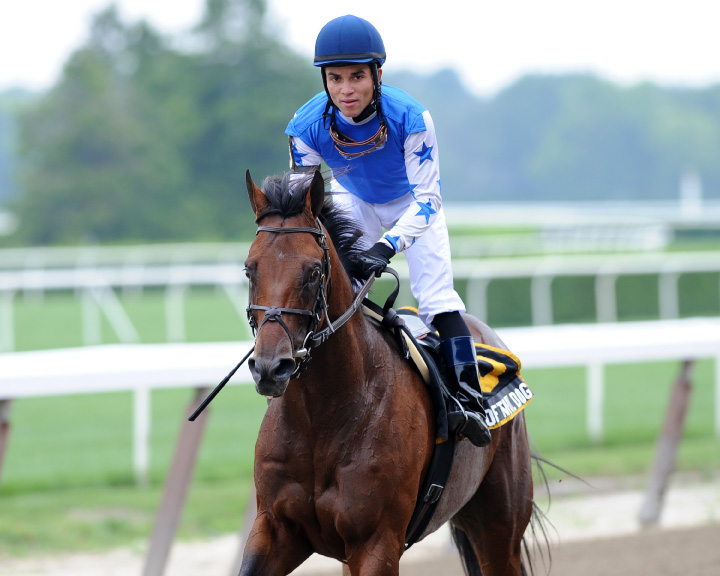