ARCADIA , Calif. (March 1, 2013)—Third in the Cal Breeders Champion Stakes going one mile on a wet fast main track on Jan. 26, Surfcup returned to the turf on Friday and the result was a facile 1 ¾ length win going one mile in Santa Anita’s $58,000 Rancho Palos Verdes Purse for 3-year-olds bred in California.

Ridden by Rafael Bejarano, Surfcup, a son of top stallion Unusual Heat owned by his breeder, Don Dizney, sat second to pacesetting Back to Bako and Martin Garcia through fractions of 23.02, 46.61, 1:10.48 and 1:22.47.  The Bob Baffert trainee rallied three-wide turning for home and got the mile in 1:34.47.

“I would say that was basically the trip I talked with Rafael about,” said Baffert assistant Jim Barnes.  “There was speed inside of us and we wanted to let them go, and have our horse relax.  Nobody moved too early, and he ran a decent time, so we’re happy.” 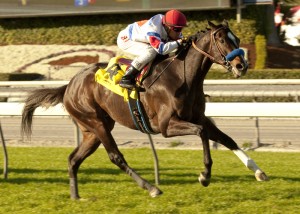 A first out maiden winner going a mile on turf at Betfair Hollywood Park on Nov. 23, Surfcup was making his fourth start on Friday.  He now has two wins and a third and with the winner’s share of $34,800, he now has earnings of $98,800.

Second place finisher China Prince, off as the third choice at 4-1 under Joe Talamo, was fourth early and saved ground at the rail around the far turn, was in a bit tight off heels in mid-stretch and rallied strongly for the place, finishing three quarters of a length in front of longshot Alydidit and Orlando Mojica.

Alydidit, off at 31-1, was last into the Club House turn and rallied to beat Back to Bako for third money by a neck.  He paid $4.20 to show.

For more racing information or to make dining and seating reservations, visit www.santaanita.com.