Seven colts, one gelding and one filly go in the Whiteley, which is headed by 9-5 favorite Golden Years. The Rodney Jenkins trainee went three-for-four during the Laurel Park fall meeting including wins in the Maryland Million Nursery (Oct. 18) and the Marylander Stakes (Dec. 6). Victor Carrasco will be aboard the son of Not For Love for the fifth consecutive time. 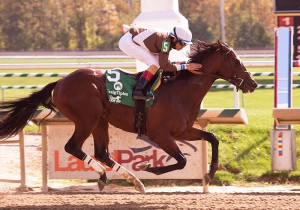 “He is doing fine. I gave him two or three weeks off after his last start doing nothing but walking and jogging to try to freshen him up. I went a little strong with him at the end of the year,” Jenkins said. “He might be a hair short for this one but he’ll try real hard. The last work (Jan. 17), we galloped him out 7/8th’s and he got a little tired but I think it helped him. The horse is very intelligent and he picks up on things real quick. If you look into his eyes he is a very, very intelligent and he is one of the best moving horses I have ever had.”

Governmentshutdown (3-1) won the Rollicking Stakes at Pimlico on Preakness weekend and was last seen on June 28 in the Bashford Manor Stakes (G3) at Churchill Downs. Julian Pimentel gets his first try on the Jerry Robb trainee. Robb has also entered Notional Debt (10-1), who broke his maiden in his last start.

Savvy Street (7-2) was an easy winner in his most recent try on January 9 at Laurel Park for Donald Barr. Savvy Street finished a game second behind Bodhisattva (4-1) when they met in mid-December.

The filly entered against males in the Whiteley is Gypsy Judy (30-1), who was fourth in the Gin Talking Stakes before breaking her maiden last time out. Horacio Karamanos rides for Robin Graham.

Eloquent Tribute is the 7-5 morning line choice in the Marshua, which features nine fillies. The daughter of Tapit broke her maiden earlier this month with an impressive 86 Beyer Speed figure after trainer Rudy Rodriguez added blinkers. Pimentel will be aboard for the first time.

Lake Sebago (5-2) is looking for her third consecutive stakes score after winning the Smart Halo (Nov. 15) and Gin Talking Stakes (Dec. 6) at the end of last year. Sheldon Russell will ride the daughter of Munnings for the first time with regular rider Trevor McCarthy injured.

Blue Mountain Juvenile Filly Stakes winner Rockin Jojo (4-1) was third in the Maryland Million Lassie in her only try at Laurel. She ships from Penn National for trainer Bernie Houghton. Matthew Rispoli will ride.

After Saturday’s fourth race, the Maryland Jockey Club will honor McCarthy and Kieron Magee for earning year-round titles a year ago.

About Laurel Park
Laurel Park is a Stronach Group company, North America’s leading Thoroughbred racetrack owner/operator. The Stronach Group racetracks include Santa Anita Park, Gulfstream Park & Casino, Golden Gate Fields, Portland Meadows, Laurel Park and Pimlico Race Course, home of the world-famous Preakness. The company owns and operates the Palm Meadows Training Center in Florida and is one of North America’s top race horse breeders through its award-winning Adena Springs operation. The Stronach Group is one of the world’s largest suppliers of pari-mutuel wagering systems, technologies and services. Its companies include AmTote, a global leader in wagering technology; Xpressbet, an Internet and telephone account wagering service; and Monarch Content Management, which acts as a simulcast purchase and sales agent of horseracing content for numerous North American racetracks and wagering outlets. The Stronach Group is also a major producer of televised horse racing programming through its HRTV cable and satellite network and is North America’s premier supplier of virtual online horse racing games, as well as a leading producer of social media content for the horseracing industry.
-mjc-