ELMONT, N.Y. – South American imports Quick Casablanca and Calidoscopio headline the Grade 2, $200,000 Brooklyn Handicap at 1 ½ miles on the main track, one of two graded stakes on Friday, the day before the Belmont Stakes.

The Brooklyn Handicap for 3-year-olds and up is the first leg of the Brooklyn-Belmont Stakes Double, which requires bettors to select the winner of both races.

Quick Casablanca , a Chilean-bred, won Group 1 races on two surfaces in South America in 2012, taking the Grade 1 El Derby on the turf in his native country and the Group 1 Asociacion Latinoamericana on the dirt in Argentina .

In his final start in South America, Quick Casablanca finished third in the Group 1 Gran Premio Hipodromo Chile in May 2012. He was subsequently sent to North America by owner Pablo Gomez and placed with trainer Christophe Clement. 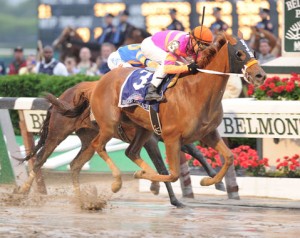 “He came out of the race in good order and has had two breezes since,” said Clement. “I know he stays, so it’s a fun race to see how he runs on dirt. He might be a little one-paced, so he might be better on dirt than on turf. We’ll try. It’s a bit difficult comparing North American form to Southern America . He was second best to a horse named Omayad who has been running in the U.S. but hasn’t had too much success, so it’s a difficult form to assess.”

Joel Rosario has the return assignment aboard Quick Casablanca, who drew post position 3, was assigned 120 pounds, and installed at 4-1 on the morning line.

The Brooklyn will be the third start in the United States for Argentine-bred Calidoscopio, who registered a 17-1 upset in the Grade 2 Breeders’ Cup Marathon in November at Santa Anita in his final start for trainer Guillermo Frankel. Transferred to Mike Puype, Calidoscopio finished a non-threatening fifth in the Grade 3 Tokyo City Cup on March 23 at Santa Anita, the 10-year-old’s lone start this year.

“He’s a horse who continues to have his little issues, but he’ll be ready to run this week,” said Puype. “The ultimate goal is to have him ready to run a mile and three quarters in the Breeders’ Cup this fall, and we need to find some races out of town with him because there isn’t much [in California] for him.”

Aaron Gryder, aboard Calidoscopio in the Breeders’ Cup and Tokyo City Cup, will ride the Stud Dona Pancha color-bearer once again in the Brooklyn . The 122-pound highweight was made the 5-2 morning-line favorite and drew post 4.

The top three finishers of the Albert the Great overnight stakes – Percussion, Fast Falcon, and Birdrun – have been entered back in the Brooklyn.

In the 1 1/8-mile Albert the Great on May 12 at Belmont, Percussion set the pace and held off Fast Falcon in a lengthy stretch battle to prevail by a nose, with Birdrun, the 2011 Brooklyn Handicap winner, finishing an additional 13 ¾ lengths behind in third.

The Brooklyn field also includes recent optional claiming winners Keep Me Informed and Flashy Sunrise, as well as Ruler On Ice, the 2011 Belmont Stakes victor who was second in the Majestic Light Stakes on May 25 at Monmouth Park .

In the Grade 3, $150,000 Jaipur, Mr. Commons will cut back in distance and take on a pair of opponents from Bruce Brown’s barn in the seven-furlong turf event.

Mr. Commons, a St George Farm homebred, has made 14 straight starts in turf races at one mile, including a pair of wins in the 2011 Grade 2 Sir Beaufort and the 2012 Grade 2 Arcadia at Santa Anita. He is winless in eight starts since the 2012 Arcadia , but has placed in races such as the Grade 1 Frank E. Kilroe Mile Handicap and Grade 2 Del Mar Mile Handicap in 2012 and the Grade 1 Maker’s 46 Mile this year.

In the Maker’s 46 Mile, his most recent start, Mr. Commons lacked the necessary rally in the stretch and finished third, beaten three lengths by reigning Horse of the Year Wise Dan on April 12 at Keeneland.

“He’s a very consistent horse; he always runs his race,” said trainer John Shirreffs, who brought a string to Belmont Park for the first time this spring. “He’s been the victim of sometimes bad pace, sometimes traffic. We really feel he hasn’t had the perfect trip yet. With a little bit of luck, he should be right there.”

Shirreffs said he wants to run Mr. Commons at longer distances, but opted to have the 5-year-old compete in the Jaipur because he thought Saturday’s Grade 1, 1 ¼-mile Woodford Reserve Manhattan Handicap would be too ambitious of a spot to try testing him over additional ground.

“[The Woodford Reserve Manhattan is] a tough race to experiment in, so we’d rather have him in a race we know he’s capable of handling,” said Shirreffs. “I do want to stretch him out at some point, but it’s his first race back after a while.”

Luis Saez will ride Mr. Commons, the 9-5 favorite on the morning line, from the rail.

Bruce Brown entered a pair of runners, both with proven stakes form in turf sprints at Belmont , in the Jaipur.

Night Officer is unbeaten in two Belmont turf sprint starts, including a neck victory in the Around the Cape overnight stakes on May 16. It was his first win in seven starts since being claimed by Brown and owner Chalk Racing out of a $50,000 optional claimer last July.

Joel Rosario has the call aboard Night Officer, tabbed at 12-1 on the morning line. The duo will leave from post 3.

Brown’s other entrant, Spring to the Sky, won Belmont’s Groovy overnight stakes by a half-length back in September, then was last of nine in the Grade 3 Bold Ruler Handicap on Belmont’s main track in October. He has made one start this year, setting the pace and yielding late to Ben’s Cat in the Jim McKay Turf Sprint on May 17 at Pimlico.

Like his stablemate, Night Officer is 12-1 on the morning line. He’ll leave from post 4 with Javier Castellano in the irons.

The Jaipur field also includes Next Question, a Grade 1 winner who was third in the Around the Cape; stakes winners Beau Choix, Summer Breezing, and Artest; and Big Screen and Joes Blazing Aaron. Politicallycorrect, Reload, and Souper Speedy were entered for the main track only.