You could hardly have scripted it better as Great Britain’s Dressage riders scooped Olympic team gold today. Yesterday the equestrian venue at Greenwich Park resounded to the wild roars of the home crowd as their jumpers topped the team podium for the first time in 60 years. Today it was the turn of Carl Hester, Laura Bechtolsheimer and Charlotte Dujardin to bring spectators to their feet in celebration of the first-ever British Dressage medals in the history of the Games – and, even better, they were also golden ones.

They began the day with a narrow lead over Germany, whose fantastic record includes team gold at the previous seven Olympic and, once in front, the London 2012 host nation riders just wouldn’t let go. And the star of the show was 26-year-old Dujardin who burst onto the Dressage scene just 18 months ago and who sealed today’s result with another fabulous ride on the 10-year-old Valegro. 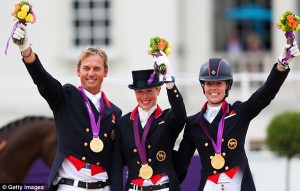 Germany had to settle for silver while The Netherlands took bronze.

The top seven teams from the Grand Prix that took place last Thursday and Friday qualified for today’s Grand Prix Special along with the leading 11 individuals and, first into the ring, it was German individual Anabel Balkenhol who set the early target with a score of 73.062 from Dablino. That was swept aside as the second tranche of riders took their turn, American team-members Steffen Peters and Ravel leading the way into the lunch-break when racking up 76.254.

But the heat was really turned up when the first member of the German team, Dorothee Schneider, set the new target at 77.571 with a charming test from Diva Royal in the early afternoon that demonstrated great piaffe and passage and a lovely attitude from the 10-year-old mare.

Britain’s opener, Carl Hester, answered that by raising the stakes with a score of 80.571 from Uthopia. This partnership took team gold and double individual silver at last year’s FEI European Championships, but they had been through a dip in form in recent months. They only started to find it again in recent months, but 45-year-old Hester is a veteran of the game and went into the ring today with all guns blazing.

“You have to be bold to get eight, nines and tens, otherwise you are not going to get high scores” he said after forging the new lead with a test full of his trademark energy and flair. Uthopia powered through extended trot and canter changes. Hester’s style is all about freedom of movement, allowing the horse to carry the rider rather than the other way around, and he demonstrated it to perfection once again today with a lovely forward-thinking ride.

Kristina Sprehe was next to go for Germany with the 12-year-old stallion Desperados who scored 76.254, but when Team GB’s second-line rider, Laura Bechtolsheimer, bettered that with a mark of 77.873 with Mistral Hojris then things were definitely going Britain’s way.

Helen Langehanenberg and Damon Hill brought the German challenge to a close with a lovely test that was rewarded with 78.937, but as Dujardin set off with Valegro it was already clear that only a disaster could prevent the host nation from taking the gold. And she didn’t disappoint.

She started out as a horse-crazy youngster, leaving school early to pursue her dreams of a life in the horse world and working her way through a series of jobs as groom and rider until, one day, Hester sat on a six-year-old horse she had produced. He had spotted it on a “talent day” when young horses were being viewed by prospective buyers, “and I asked if I could ride it” he explained today, “I could feel that it was very well trained considering its age and experience and I told her she had done a great job” he explained. The story goes that Dujardin went to work for Hester for 10 days and has been there ever since. “What she has that makes her a great rider is feel, and an amazing temperament” Hester said today.

With gold hanging in the balance, Hester told her before she went into the arena, “some people wish it would happen, some people hope it will happen, you’re going to make it happen Charlotte!” And she did just that with a performance that earned the highest score of the day, 80.571. “Charlotte is unbelievable, and he’s the best horse in the world!” Hester said afterwards. The pair only made their debut at Grand Prix level in February 2011, yet this extraordinary partnership today won Olympic gold for Team GB.

In the battle for bronze, Denmark overtook Sweden when Nathalie Zu Sayn Wittgenstein and Digby posted 75.730 but, last to go, The Netherlands’ Adelinde Cornelissen pushed them both aside when her double FEI World Cup™ Dressage champion Parzival delivered the second-best score of the day, 81.968.

It was a landmark day for the Dutch, as Anky van Grunsven added team bronze to her vast collection, becoming the most medalled competitor in the history of Olympic equestrian sport. The defending individual Olympic champion, and the only Dressage rider to take three back-to-back Olympic titles, earned her ninth Olympic medal in Greenwich Park today.

The Germans were gracious in defeat. As Chef d’Equipe, Klaus Roeser explained, the sport in the country that has been so dominant for so long is going through a time of change. “This is a new young group of riders, and it’s very easy to work with them, they are very professional but nice young ladies, and they are really working together as a team”, he explained.

Langehanenberg backed that up, the 30-year-old who made a big impact over the last FEI World Cup™ Dressage season pointing out that “yes, we are a real team, a great team, and we have been having a great time here in London! We are new to the Olympic Games and we have come here with fresh horses but we are really happy and proud with this result!”

There was a poignant moment when Dorothee Schneider talked about her lovely 10 year old mare Diva Royal. ”She is a very positive character and knows how to present herself going into the arena, she grows 10 centimetres bigger – she is a diva but in a positive way!” she said.  But tears welled up in her eyes as she explained that the mare will return to her owners in two days’ time and that Thursday’s Freestyle will be the last time she rides her.

Two of the British horses may also be moving home in the not-too-distant future according to Hester. “I’ve had Uthopia for six years and the plan was always to ride him at the Olympic Games and then he would be sold. I imagine that will happen now, but I’d rather dwell on the fact that both of these people who own these horses (Uthopia and Valegro) kept them for us for the Olympics. I’d like to say thank you. First though they’ll be going home with us on Friday and will go out in the field for a holiday.”

Hester hails from Sark, in the Channel Islands, and the tiny island will now proudly paint its only postbox gold, as the hometown of every British gold medal winner is doing. Today’s victory by the Dressage team brought Great Britain’s gold medal tally at London 2012 to 20, the largest haul since 1908.

Bechtolsheimer, whose grandfather had travelled from Switzerland to see her on this very special day, paid tribute to the support of the crowd that has boosted every British team effort since the Games began and, asked what it feels like to be a gold medallist, said “I’ve been asked this question so many times and finally being able to answer seems bizarre!” she said. “It’s very emotional. I always thought that to come here and win any medal would be amazing, but to win gold . . .it’s an incredible feeling. We are very proud of each other and of our horses.”

Now the leading contenders must focus on Thursday’s Freestyle Final which will decide the individual Olympic champion. And it’s not just the British that are looking ahead to that, the Germans and Dutch are too. “I can’t wait for it” said Langehanenberg, “I love it and so does my horse!”, while Cornelissen said with a hint of a warning, “Parzival is in great shape, and I know we can do a little better than today”

Tomorrow the attention returns to the Jumping riders, with the top 35 lining out in the individual final, and British hopes are flying high after yesterday’s fantastic gold-medal-winning performance. The closing stages of the London 2012 Olympic equestrian events promise two more days of fantastic sport.

32 horse-and-rider combinations started in today’s Grand Prix Special.
The best seven teams came forward from the Grand Prix which ran over two days, 2 and 3 August – Great Britain, Germany, The Netherlands, Denmark, USA, Spain, Sweden.
The top 11 individuals from the Grand Prix also qualified.
The scores from today’s competition were added to those awarded in the Grand Prix to decide the Dressage team Olympic medals.
The top 18 individuals at the end of today’s competition have qualified for the Freestyle Final which will take place on Thursday, 9 August.
Great Britain came into the Grand Prix Special with a narrow lead over Germany of just 0.562 percentage points.

Steffen Peters (USA): “I’m very happy. We had a little stumble after the first pirouette, but I thought the piaffes were even better today. He (Ravel) is still in great form and wants to perform. It is a great honour to represent your nation (at the Olympic Games). It has been three times for us, but I am still excited by it. It is still just as fresh as the first time, especially at a beautiful venue like Greenwich Park.”

Jan Ebeling (USA): “I wish my score was higher but we made no mistakes. I couldn’t be more pleased with my horse (Rafalca which is part-owned by the wife of 2012 US Presidential candidate Mitt Romney).

Jan Ebeling (USA) when asked if Rafalca’s owners were at Greenwich Park today to watch their horse in action: “Yes, the three amigos are in the audience – that is Mrs Romney, my wife and Beth Meyer. I blew them a kiss at the end as I knew where they were sitting.”

Dorothee Schneider (GER): “In the arena there is never a moment to feel complacent, too many things can happen. But when I was over the pirouettes, I started feeling like I would come home in good shape”. Talking about the number of German supporters in the stadium: “It gave me goosebumps, made the hair rise on the back of my neck. There are so many people from home in the stands. When they learned I had qualified they all bought tickets on ebay.”

Carl Hester (GBR): “You have to be a bold rider to score eight, nine and 10s, otherwise you are not going to get high scores.”

Carl Hester (GBR): “This was a new world record for the Special. Charlotte (Dujardin) holds the world record and it will be very hard for her to achieve that again here but I expect her to come in and squash my Olympic record very shortly!”

Anky van Grunsven (NED): “I’m really happy and really proud of my 18-year-old (third Olympics) horse Salinero. He’s fit and loose and in a good mood, me as well. Last week I thought my individual chance had gone, but today I am thinking let’s do a Kür as well.” 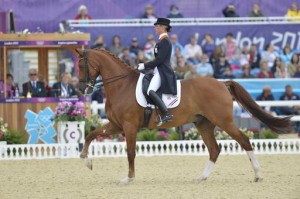