The German duo lowered one rail in show jumping to finish on 42.7 penalties, just ahead of France’s Maxime Livio and Qalao Des Mers in second (44.6) and England’s Zara Tindall and High Kingdom in third (46.6). 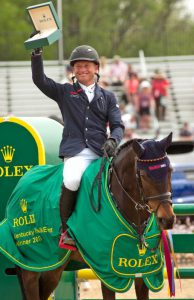 Michael Jung was all smiles when he received the Rolex watch for winning with FischerRocana FST at Rolex Kentucky. (Michelle Dunn Photo)

By placing fourth, a pair of U.S. veterans, Phillip Dutton and Mr. Medicott (54.6), who took home the Roger Haller Memorial Trophy for the Rolex/USEF CCI4* Eventing National Championship. Dutton won the national championship for a record fifth time, and his finish this weekend on three horses gives him an astounding 40 completions at the Rolex Kentucky Three-Day Event, presented by Land Rover.

Show jumping day was hot and blustery, but that didn’t prevent 24,159 fans from packing the Rolex Stadium to see the best in the world compete for $400,000 in prize money. Double-clean rounds were few and far between, with only one coming in the first session, for Will Faudree and Pfun. There would only be three more in the second session, for Livio, Tindall and Kurt Martin on Delux Z. Dutton and Mr. Medicott would leave all the rails in the cups, but add 1 time penalty to his score.

Jung, 34, Horb, Germany, would continue his streak of not being perfect, but still being good enough, by having a rail down in the triple combination. However, his six-point lead going in to the show jumping allowed for one mistake to claim the victory. 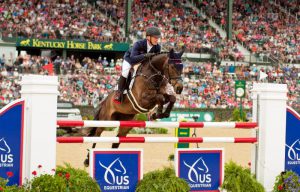 “Without the horse you are just walking people, I’m not sure how you say that in English,” said Jung with a laugh. “This is a very wonderful horse, she is absolutely a top horse, and she is always fighting for me. We have a partnership, I know everything that she needs for me to motivate her. But she was perfect. I am so thankful for my whole team and my horse.”

Jung went on to say the he felt his rail in the triple combination had begun earlier on course when she spooked at the stark white rails of an the Race Track Rail combination. “Maybe I used my hands too much,” he admitted. “Then we had the problem in the triple and I had two more jumps so that made me nervous!” Maxime Livio and Qalao Des Mers of France were nearly perfect, but had to settle for second place at Rolex Kentucky. (Michelle Dunn Photo)

Livio, 29, Saumur, France, had been chasing Jung all weekend, and he is the only person to have beaten him in recent memory, but he settled for second place today. His powerful double-clean round put the pressure on Jung as he cantered out of the ring.

“There is always a little pressure in the ring, especially at a four-star with all the top riders,” Livio said. “With my horse, I just have to stick to him and stick to my ride, and if I do that the pressure goes down. I know if I’m very focused on my riding, the horse will do his best. But, of course there is pressure because I want to be good enough for my horse, and after that it’s good for me to start to put pressure on (Jung). I think to try beat such a rider you have to be 100 percent all the time. All this week my horse was 100 percent, but I was maybe only 90 percent in dressage. But after that I have no regrets.” 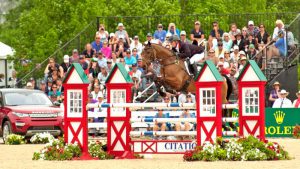 Zara Tindall and High Kingdom of Great Britain had a much better trip this time, to finish third at Rolex Kentucky. (Michelle Dunn Photo)

Tindall, 35, Gloucestershire, England, came in to this event keeping her expectations in check following a difficult trip to the Kentucky Horse Park two years ago where an injury in the stable prevented her from even starting. But each day she put in a sparkling performances to, like Livio, be one of only two to finish on their dressage score.

“I’m obviously very lucky to come back and very thankful to my owner and to Land Rover and Rolex to be able to come back,” she said. “It’s great to be sitting up here with these guys. My horse was fantastic all the way through the competition -he jumped great today.

“He doesn’t owe me anything,” added Tindall, noting the horse has been in the ribbons at several four stars and has an Olympic medal and a World Championship medal on his resume. “I loved riding him all weekend. This is such a fantastic competition, thanks for having it.”

Dutton came to Kentucky without his usual enthusiasm. In the fall of 2016, his step-daughter LeeLee Jones suffered a devastating head injury while riding, and has been in the hospital or a rehabilitation facility ever since. “It’s not easy,” he said, emotion coloring his voice. “LeeLee is in rehab at Bryn Mawr and I’m very glad for the livestreaming because she apparently loved watching. But it’s a struggle and it’s something I hope you all don’t ever have to go through. Everybody in the horse world has been great–it’s a great family to be a part of.” Dutton, 53, West Grove, Pa., brought three horses to Kentucky, and all three finished in the top 10, with Fernhill Fugitive finishing eighth (63.0) and I’m Sew Ready finishing 10th (69.1). But it was his top placing mount, Mr. Medicott, who brought Dutton his fifth national championship.

“Cave,” as he is known, is 18 this year, well past the age that many horses are competing at this level, but he has Olympic performances to his name and was bought for Dutton with those goals in mind. Unfortunately, he suffered an injury and has spent the last two years recovering, but after showing Dutton he was ready, he earned a trip to Rolex Kentucky.

“I was quite unsure about whether I should bring him,” Dutton admitted. “He’s been off for two years, but there wasn’t much else for him the rest of the year that was suitable, and for a horse like this, this is an appropriate event. But for him to show so much heart-I mean, I only did one horse trial on him in two years. He’s such as an incredible horse. I probably didn’t have him fit enough, but he was just incredible this weekend.”

While the horse looked wonderful all weekend, Dutton announced that he would be retiring Mr. Medicott from this level of competition.

In the Dubarry of Ireland Nations Team Challenge, Team USA jumped out in front of the combined New Zealand/France/Germany team to win with a score of 179.2. The combined team finished second with 180.3 over Team Canada in third with 231.5. Team USA included Hannah Sue Burnett/Under Suspection, Boyd Martin/Cracker Jack, Dutton/Fernhill Fugitive, and Lauren Kieffer/Vermiculus. Prior to the show jumping, Buck Davidson retired his venerable mount Ballynoe Castle RM in front of cheering crowds. Buck and “Reggie’s” friends and family turned out to wish the Irish Sport Horse gelding a happy retirement. Davidson and his long-time groom Kathleen Blauth-Murray choked back tears as they draped him in flowers and a blanket commemorating his long career.

In all, 80,654 people came to the Kentucky Horse Park this weekend to enjoy amazing performances at the Rolex Kentucky Three-Day Event, presented by Land Rover.

The Rolex Kentucky Three-Day Event is the nation’s premier Three-Day Event and one of the most prestigious equestrian competitions in the world. The International Equestrian Federation (FEI), the world’s governing body of equestrian sports, has designated the Rolex Kentucky Three-Day Event as a ‘Four Star’ eventing competition, the highest designation, which is given only to the Olympic Games, World Championships, and six annual events around the world. “Rolex Kentucky” is the only Four Star event in the Western Hemisphere and is part of the Rolex Grand Slam of Eventing. It hosts the Dubarry of Ireland Nations Team Challenge and serves as the Rolex/USEF CCI4* Eventing National Championship.

The official charity of this year’s Rolex Kentucky Three-Day Event is Central Kentucky Riding for Hope (CKRH). Further information is available at the event’s official website at www.RK3DE.org.