Fredric Remington was born in Canton, New York October 4, 1861. He was brought up during the Civil War, his boyhood passions consisted of riding, boating, fishing, hunting, the military and the great outdoors. During school he enjoyed sketching and doodling different objects especially soldiers in military uniforms. 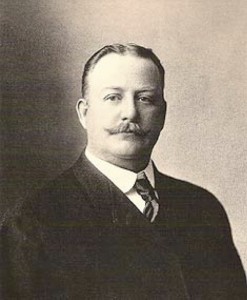 As a young adult Remington tried many different avenues of interest. He tried college, and dropped out in 1880 when his father died of an abrupt illness. Then he ventured out into the business world, but most of these government and business endeavors only lasted a few months.

In the summer of 1879 he met and began wooing Eva Adele Caten, and in the fall of 1884 they were married. The couple tried the wearying Western frontier life for a time but quickly opted to move to the city of Brooklyn, New York. Due to some bad dealings in business and difficulties in life, she left and returned to her father’s home.

Remington then went and wandered in the desert for several weeks, a kind of purging of the soul. After which, he returned to claim his wife and all his rightful responsibilities.

Shortly after Remington’s arrival in New York, he solicited work with Harper’s Weekly using his portfolio of western sketches. He then set out to prove himself as an artist. It was during this time that Remington’s art career bloomed and developed into one of the most prolific artistes of his time. In his sketches he portrayed the subject matter that most captivated his interests; horses, military and the western frontier. And in return Remington made these interests the interests of the public. 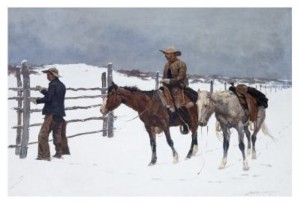 Remington thought this of his art work, “Cowboys are my cash.” The first of his attempts in sculpting was The Broncho Buster. In the public eye Remington is reputed to be America’s most popular nineteenth century Western artist.

December 1909, at the apex of his career and the prime of his life Remington suddenly died from a ruptured appendix. Remington was a man who loved the vigours adventures of the outdoors; taking others with him on long trail rides, nature hikes, fishing and hunting trips. His work has and always will inspire this same love and appreciation in others, for the rustic life of the West and the great outdoors. 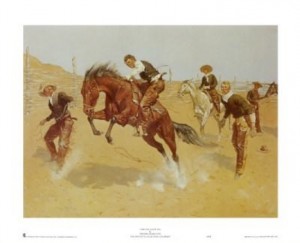