The magical town of Valle de Bravo, located on the shore of Lake Avándaro and over 150km southwest of Mexico City, played host to the FEI Children’s International Classics Final last week (3 February).

A total of 32 young athletes from 14 nations battled it out at the Rancho Avándaro Country Club, where Mexico’s Juan Pablo Gaspar, 14, and his striking grey gelding Puertas Blue Dream clinched the gold medal.

France’s Camille Conde-Ferreira, 13, secured silver with Black Jumper, and Venezuela’s Isabella Andreu, who will turn 14 at the end of this month – and who scored a faultless round just like her fellow medallists – took home bronze with Red Graf. 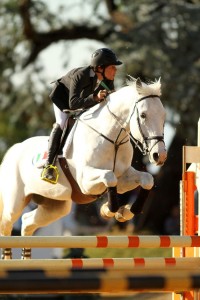 World-wide qualifiers, borrowed horses & electric atmosphere
Qualifications for the Final took place at Gold Tour events in 26 countries around the world during 2012. Sixteen foreign athletes from the FEI ChIC World Standings were then invited to attend the Final alongside 16 athletes from host nation Mexico.
According to the rules, each home athlete brings two horses to the event. A draw then takes place to decide which of the two horses they will ride, with the remaining horse ridden by a foreign athlete, also selected by a draw.
All athletes are then entitled to two 30-minute training sessions to acquaint themselves with their horses, followed by a Warm-Up competition. As expected, Mexico dominated the top spots in the Warm-Up, but as the week progressed the foreign athletes struck up strong partnerships with their borrowed horses, and they gave their hosts a run for their money!
First qualifier
The First Qualifier took place under the hot Avándaro afternoon sun, with all 32 participants taking part and all but one athlete successfully completing the course designed by John Vallance (AUS).
Mexico filled the podium, taking seven of the top 10 places with Camille Conde-Ferreira (FRA), Robyn Walker (CAN) and Maria Julia de Barros Gubeissi (BRA) representing the foreign athletes.
Hot Mexican favourites Juan Pablo Gaspar and Puertas Blue Dream lived up to their reputation, taking first place with zero faults in an impressive 55.55 seconds, followed by compatriots Uriel Sosa aboard Zoltan and Dulce Maria Sanchez taking third with her mare Ananda.
Second qualifier
The Second Qualifier saw a change in the podium as new partnerships between the borrowed horses and their foreign athletes grew stronger.
This time, the top 10 was dominated by seven foreign athletes, with France’s Camille Conde-Ferreira and Black Jumper snatching first place from the experienced Juan Pablo Gaspar and Puertas Blue Dream by three hundredths of a second.
Farewell & Final Competition
The Farewell competition, open to athletes who did not qualify for the Final, took place in front of a capacity crowd of over 2,500 spectators.
Mexico’s Alfonso Gutierrez on Volumia took first place in a time of 65.30 seconds, with compatriots Dayanne Salas with Nicita storming home in second, and Antonio Abascal aboard Continio 4 coming in third with 67.88 seconds.
Attention then turned to the Final Competition, open to 16 athletes earning the highest number of points from the qualifiers and a maximum of eight home athletes allowed.
The 16 athletes tackled the testing course with seven going clear ahead of the tough jump-off. With ever-mounting pressure, it was only those athletes with a clear mind and strong focus that would be able to hold out.
New Zealand’s Briar Burnett-Grant – who at 12 was this year’s second youngest athlete – was first into the jump-off with her mare Chipica, securing a speedy time with just 4 faults. In the end, only four athletes went clear, so the medals came down to the speed and trust between horse and rider.
Australian athlete Jessica Tripp, competing for the first time out of her home country, narrowly missed out on the bronze medal on Puertas Catena, when they were beaten by just 0.61 seconds by Isabella Andreu (VEN) who had been quietly making her way up the leader board with the powerful Red Graf.
Battle for Gold
The battle for gold was set between the two favourites, who had shown their dominance from the very beginning – Camille Conde-Ferreira and Juan Pablo Gaspar.
Juan Pablo and Puertas Blue Dream have been competing together and climbing the Jumping ladder for several years, while Camille had only met her mount just five days previously.
The pressure was on for Camille, who was in the arena first. She finished fourth in the 2011 FEI Children’s International Classics Final, and was desperate not to miss out on the podium this time. She needed to go clear and be quick to keep the pressure on Juan Pablo. They finished a very neat, careful round and broke the beam nearly three seconds faster than the current leader, Isabella Andreu (VEN).
Juan Pablo, who seemed to have the whole of Mexico riding every stride with him, looked relaxed and with Puertas Blue Dream made the course look easy.
With a perfect round, and managing to take two seconds off Camille’s time, the combination crossed the line in just 32.39 seconds and in front of his ecstatic home crowd.
Results
Gold: Juan Pablo Gaspar (MEX)/Puertas Blue Dream
Silver: Camille Conde-Ferraira (FRA)/Black Jumper
Bronze: Isabella Andreu (VEN)/Red Graf
For full results, click here.
FEI Media contacts:
Ruth Grundy
Manager Press Relations
ruth.grundy@fei.org
+41 78 750 61 45
Malina Gueorguiev
Manager Press Relations
malina.gueorguiev@fei.org
+41 78 750 61 33