By Louise Parkes
All the qualifiers for the Longines FEI World Cup™ 2014/2015 Final have now concluded, following the Central European League Final in Warsaw, Poland 12 days ago and the last legs of the North America East and West Coast Leagues at Ocala, Florida and Thermal, California.
The excitement is building by the day, with the deadline for receipt of nominated entries coming up tomorrow, 27 March, and definite entries due to be confirmed by 6 April, just a week before the Longines FEI World Cup™ Jumping Final begins at the Thomas & Mack Arena in Las Vegas, USA, the 37th running of arguably the sport’s most sought-after individual title.
Central European League
Latvia’s Kristaps Neretnieks emerged as Central European champion at the exciting Final in Warsaw where 17 riders from eight countries – Belarus, Czech Republic, Estonia, Latvia,
Lithuania, Poland, Russia, Turkey – battled it out for the honours.
The Central European League is sub-divided into two regions due to the vast land-base over which it takes place, and Turkey’s Derin Demirsoy was the sole representative from the
Southern Sub-League at the Final staged in Poland’s capital city.
There were 11 points-gaining events in the Northern Sub-League and four in the Southern Sub-League, and riders arrived at the Central European League Final carrying their best five results to which points earned from three further competitions would also be added.
Neretnieks didn’t get off to a great start when collecting 12 penalty seconds in the opening Table C Speed class with Casscare which left him well down the line. It was the host nation’s Jaroslaw Skrzyczynski who scored best here when runner-up with Inferno ahead of Turkey’s Demirsoy riding Harry K. The win went to Germany’s Marcel Braig, but he was not in contention for Central European League points.
And in the Table A class that followed, it was Estonia’s Gunnar Klettenberg who seized the maximum 20 points available when second with Lance S, while Aleksandr Lis from Belarus was next best in fifth place with Que Pasa. A single error with Caramsin pinned Neretnieks back into 11th  position here, but in the Grand Prix his 10-year-old bay Hannoverian stallion secured victory in style.
All to play for
There was a massive 40 points up for grabs this time out, so it was all to play for. Producing one of just four double-clear rounds from the starting field of 40 horse-and-rider combinations, the 25-year-old Latvian left the rest floundering in his wake as he galloped to victory in the quickest time of 38.48 seconds. Poland’s Msciwoj Kiecon (Urbane) and Jaroslaw Skrzyczynski (Crazy Quick) slotted into third and fourth places, but it was his seventh-place finish with Rocketman that secured runner-up spot on the series table for Russia’s Vladimir Beletskiy.
Latvia’s Andis Varna finished third on the final leaderboard ahead of Ales Opatrny from the Czech Republic in fourth while Skrzyczynski, fellow-Pole Michal Kazmierczak and Turkey’s Demirsoy filled fifth, sixth and seventh spots.
Neretnieks, Beletskiy and Varna are already on the list of nominated entries for the Longines FEI World Cup™ Jumping 2014/2015 Final in Las Vegas. Neretnieks previously competed at the 2013 Finals in Gothenburg, Sweden and at last year’s Longines Final in 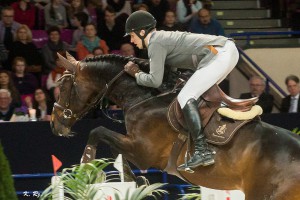 Lyon, France. Riding Conte Bellini, he also competed at the Alltech FEI World Equestrian Games™ 2014 in Normandy, France.
North American Leagues
Todd Minikus won the FEI World Cup™ Jumping 2014/2015 North America East Coast League, while fellow-American and 2012 FEI World Cup™ Jumping champion Rich Fellers topped the West Coast League.
The East Coast League embraced results from 13 events staged across the USA and Canada with the opportunity to gain crossover points from the West Coast and Western European League series. A total of 114 athletes participated, with 80 collecting points and each rider counted their best five results to decide the eventual winner.
It’s going to be a star-studded East Coast line-up at Las Vegas, with Minikus joined by Beijing Olympic team gold medallist Laura Kraut and 2013 FEI World Cup™ Jumping champion Beezie Madden along with Jack Towell, Kirsten Coe and McLain Ward.
Minikus began his march to the top of the leaderboard by taking maximum points at the opening leg in Bromont, Canada last July, and again at the sixth leg in Harrisburg, USA in October. He picked up more points in Washington, and although he missed out at Lexington in Kentucky a few weeks later, he brought his tally of points to 81 when runner-up behind McLain Ward at the qualifier in Toronto, Canada in November. He then sat back and left it to the rest to catch up with him.
Kraut came with a late run, helped by a double of wins in Wellington, Florida in November and again earlier this month, while Madden also scored a double, topping the leg at Lexington and finally securing her spot when second to Ireland’s Cian O’Connor in the Grand Prix at Live Oaks Plantation in Ocala, Florida last weekend. As the Irishman was not in contention for North American East Coast League points, Madden took the maximum 20 to leave her on a final total of 76, just one behind Kraut.
Towell completed with 71 points on the board while Coe collected 66 and Ward 61 to make the cut. Also finishing on 61 points was Leslie Burr Howard who, at the age of 29, became the sixth American to be crowned FEI World Cup™ Jumping champion at the Final in Gothenburg, Sweden back in 1986. She won’t compete at this year’s Final however, so her place goes to the next rider on the North America East Coast League table, 21-year-old Katie Dinan.
East Coast champion, Minikus, has enjoyed a great run of form with his talented 12-year-old Oldenburg mare, Quality Girl.
West Coast
There were nine chances to qualify from the North America West Coast series, with the opportunity to also gain crossover points from the East Coast and Western European Leagues. Rich Fellers, the man who brought the FEI World Cup™ Jumping title back to the USA for the first time in 25 years when coming out on top at the 2012 Final, won through ahead of Susan Artes who also finished with 65 points but who had to settle for runner-up spot due to Fellers’ higher placings. Just three qualify from this region, and Karl Cook has earned the third qualifying spot.
A total of 75 athletes competed, with 47 earning points and, again, the five best results decided the league title. Events took place across Canada and the USA, and Fellers kick-started his campaign at Langley in Canada where he collected 13 points before claiming the maximum 20 at the fourth leg in Rancho Murieta in California last October. He maintained his momentum with 17 more to add at the next leg in Del Mar, California, but it was his trip to the last qualifier at Live Oak Plantation in Florida last weekend that finally and firmly booked his ticket to Las Vegas.
Artes was thoroughly consistent throughout her seven outings, missing out on points just once at the seventh leg in Las Vegas, so she will be hoping that her return visit to the entertainment capital of the world will be more productive in just over two weeks’ time. She has a legion of fans who follow her every move, partly due to her relatively unusual path to the top of her sport. Originally a hunter/jumper rider on the US circuit, the 50-year-old from Burbank in California has honed a tremendous partnership with the 11-year-old Dutch-bred gelding Zamiro which she has had since he was five. Together they collected all their points at Californian venues including Del Mar, Rancho Murieta and Thermal. Artes previously qualified for the FEI World Cup™ Final in 2007 but didn’t compete. This time around she has every intention of giving it her best shot.
Karl Cook was only 23 years old when competing at the 2013 Final at Gothenburg. He lined out at seven events in the North American West Coast League this season, and his third-place finish was boosted by maximum points at round six in Thermal last October, and 17 points at the following leg in Las Vegas.
Fellers and the 19-year-old stallion Flexible took the sport by storm when winning the coveted trophy at ‘s-Hertogenbosch in The Netherlands three years ago. This horse has experienced so many come-backs from illness and injury during his career that he has long been a legend, and together with his 55-year-old rider he will have huge support when the Longines FEI World Cup™ Jumping 2014/2015 Final gets underway in Las Vegas on 15 April.
Press release courtesy of FEI.