ELMONT , N.Y. – Before saddling a record five horses in the Grade 1, $1 million Belmont Stakes, trainer Todd Pletcher will send out top contenders in each of the supporting sprint stakes on Saturday’s Belmont undercard.

Saturday’s 13-race card features six stakes, five of them graded, highlighted by the 1 ½-mile Belmont, the oldest, last and longest leg of the Triple Crown.

An 8-year-old son of Arromanches, Caixa Eletronica will make his 63rd career start in the six-furlong True North, a race he won by three-quarters of a length last year over Justin Phillip, who also returns to the race.

Winner of the Uncle Mo overnight stakes at Aqueduct Racetrack in March to open his year, Caixa Eletronica was fifth when attempting to repeat in the Grade 2 Charles Town Classic on April 20 going 1 1/8 miles. 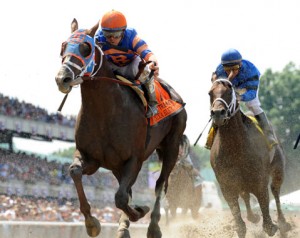 “He’s a warrior,” Pletcher said. “He’s just a really, really cool horse who shows up every time and seems to get better with age. His last race wasn’t what we were hoping for, but the race before that he put on a good performance. He’s probably a little bit better sprinting than going long, but he seems like he’s training really well.”

Owned by Repole Stable, Caixa Eletronica has a record of 20-8-11 , hitting the board in five of eight lifetime starts at Belmont Park , and all but one of 10 career starts at six furlongs.

“We’re happy with him,” Pletcher said. “He’s shown up here on a number of occasions and performed really well. We feel like he’s coming up to this in good shape.”

Sage Valley returned from a six-month layoff to win the Grade 3 Maryland Sprint Handicap on the Preakness undercard May 18 at Pimlico in his 2013 debut. Trainer Rudy Rodriguez comes right back with the 4-year-old Discreet Cat colt, who brings a four-race win streak into the RTN True North, and is 2-for-3 at Belmont and 3-for-5 at the distance.

“We were expecting him to run good, but when you’re coming into a graded race and coming off [a long] layoff, you don’t know,” Rodriguez said. “We wanted to get him going, because you don’t know how long they’re going to last. He looks like he’s ready to run. He hasn’t missed anything. He’s here, and he’s good, so we’ll go. He’s a good horse, and the good horses want to run.”

Testing graded stakes waters for the first time in the True North will be Reload, trained by Hall of Famer Shug McGaughey for the  Phipps Stable. Reload has won his last two races by 11 ¾ lengths combined, and has been first or second in four of five career starts at Belmont .

“It’s a big step up for him,” McGaughey said. “His last two races, he won easy. There’s obviously some very solid horses in it, but I’m looking forward to seeing where he takes us. We only have to walk 200 yards [from the barn], so we might as well see. I think he’s got a chance to be that kind of horse.”

A multiple graded stakes winner, Justin Phillip enters the True North off two straight victories, including the Grade 3 Count Fleet Sprint Handicap at Oaklawn Park on April 13 in his most recent effort. Another True North contender, Laurie’s Rocket, was fourth in that race and third to Sage Valley in the Maryland Sprint Handicap.

Completing the field are Off the Jak, who captured the $150,000 Sunshine Millions Sprint for Florida-breds at Gulfstream Park on January 19, and Luckysdream.

Pletcher-trained stablemates Forty Tales and Capo Bastone, who ran 1-2, respectively, separated by only a neck in the Grade 3 Derby Trial at Churchill Downs on April 27, will hook up again in the seven-furlong Woody Stephens.

In the Derby Trial, favored Forty Tales got off well from post four and raced on the outside, having enough left to hold off Capo Bastone, who lunged at the start and ran at or near the back of the pack before flying late.

“I think they’re very evenly matched,” Pletcher said. “Capo Bastone got back a little further than probably is ideal in his last start, but I think he has probably found his niche in one-turn races coming from a little bit off the pace. Forty Tales has consistently run well in these types of races.”

The Derby Trial was Forty Tales’ third straight graded stakes try and first win, though he was second by a half-length in the Grade 2 Hutcheson on February 2, and fifth, beaten only 3 ¼ lengths, in the Grade 3 Swale, both at Gulfstream Park.

The chestnut son of Street Boss cuts back for the Woody Stephens after winning an optional claimer in the slop at 1 1/16 miles in his 3-year-old debut, then finishing ninth after stumbling at the start of the 1 1/8-mile Grade 3 Spiral prior to the one-mile Derby Trial.

“We tried to stretch him out a little bit, and he ran some competitive races,” Pletcher said. “We’re just trying to find out what his specialty is, and felt like this will kind of clarify it, backing up to seven-eighths, and kind of tell us what to do moving forward.

“Forty Tales, we haven’t him beyond the mile because we kind of feel this is what he does best.”

Breaking from the rail in the Woody Stephens is the lightly raced but talented Declan’s Warrior, trained by Hall of Famer Nick Zito for Lucky Shamrock Stable. The 3-year-old Majestic Warrior colt began a three-race win streak by dead-heating for first in a 7 ½-furlong optional claimer at Gulfstream Park on March 9.

Declan’s Warrior followed up by rallying on the outside to beat Clearly Now by a head in the Grade 3 Bay Shore at Aqueduct on April 6, and was a neck better than Tenango in the Gygistar overnight stakes at Belmont Park on May 22 in an eye-opening 1:20.85.

Zito felt Declan’s Warrior was doing well enough to run back in just 17 days in what will be only his sixth lifetime start. He is 2-for-2 at both Belmont Park and the seven-furlong distance.

Clearly Now, from the barn of trainer Brian Lynch, looks to turn the tables on Declan’s Warrior in the Woody Stephens. A $30,000 yearling purchase, the Up Hill Stable color-bearer won the Grade 3 Swale at Gulfstream Park on March 2.

Also entered are Grade 2 Hutcheson winner Honorable Dillon; multiple stakes winners Whiskey Romeo and Merit Man, who has been off since finishing third to Kentucky Derby winner Orb in the Grade 1 Florida Derby on March 30; Zee Bros, who captured the $100,000 Chick Lang on the Preakness undercard May 18; Gygistar runner-up Tenango; Let Em Shine, a winner of three straight races and the 3-1 morning-line favorite; Salutos Amigos and Retrieve, who ran fourth and seventh, respectively, in the Bay Shore.

The field for the Grade 2, $400,000 Woody Stephens presented by NYRA Rewards: