“I think it’s got to be a lot more comfortable than shipping to Kentucky or to Maryland; from here, all he has to do is walk from here [the barn] to there [the track],” said McGaughey. “He walks through the paddock every morning and trains over the racetrack every day, which he did as a 2-year-old and 3-year-old, except when we were in Florida . He’s been here for three weeks, and I think it has to be a help not only mentally but being familiar with the footing as well. He’s done well here and trained well here.”

Similarly, McGaughey thinks his own familiarity with Belmont Park , and that of jockey Joel Rosario, will be to Orb’s benefit.

“Some jockeys don’t ride here on a regular basis, and they might not be as familiar with what’s going on,” he said. “When they turn down that backstretch, they’ve got a long way to go. A lot of them, I think, will move a little early. 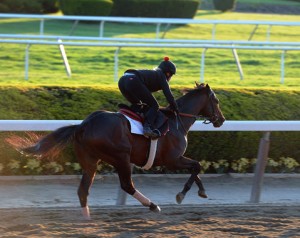 “As long as I’ve been up here, I understand my surroundings and I understand Belmont Park ,” he added, “and I think Rosario is going to be the same way.”

The 1 ½-mile Belmont is at a distance which McGaughey feels is within Orb’s scope.

As many as 15 will line up for the Belmont . In addition to Orb and Preakness winner Oxbow, likely for Wednesday’s post position draw are Revolutionary, Unlimited Budget, Overanalyze, Palace Malice, Midnight Taboo, Will Take Charge,Freedom Child, Vyjack, Incognito, Always in a Tiz, Frac Daddy, Golden Seal, and Giant Finish. Frac Daddy and Golden Seal were expected to arrive at Belmont Park today.

Grade 1 Preakness Stakes winner Oxbow led the D. Wayne Lukas-trained contingent off the van early Monday evening at Belmont Park , where they will be stabled at the barn of trainer Barclay Tagg. Joining Oxbow were Rebel Stakes winner Will Take Charge, who is also bound for the Belmont Stakes, as well as Optimizer, who will compete in the Grade 1, $500,000 Woodford Reserve Manhattan.

“Everything was fine. No problems,” Lukas said of the arrival. “They trained well, had good energy this morning. Everything was in good order. They just jogged. They’ll gallop this week. Everything’s done now. Just keep them happy.”

On Oxbow, Lukas said, “He’s a tough little horse. The Preakness took nothing out of him. He’s full of himself. He’ll be tough again.”

Todd Pletcher’s Belmont Stakes quintet had a quiet morning as they walked the shedrow at Belmont Park .

“They all went to the gate yesterday, so there wasn’t a lot of action around here,”
said Michael McCarthy, Pletcher’s assistant.

“Overanalyze is a Grade 1 winner, and he beat Oxbow by 5 ¼ lengths in the Arkansas Derby,” said Repole. “He ran a sneaky-good race in the Kentucky Derby where he was shuffled back but ran on, and I don’t think he loved the track.”

“I think this one year where I think the fillies are as good as the boys,” the owner said of his decision to run Unlimited Budget in the Belmont . “She ran a good race when she was third in the Kentucky Oaks, and two fillies out of that race, Midnight Lucky and Close Hatches, came back to run 1-2 in the Acorn. Unlimited Budget is a large filly, and when the 15 horses come out you’ll think she’s one of the colts. She also has a good mind for a mile and a half where she’ll settle.”

“Midnight Taboo was talented as a 2-year-old before he went back to the farm,” the owner added. “He won his first race back, and he was a really good second in his next race, a race he was never going to win. I think he would have won the Easy Goer [on the Belmont undercard], but you get one chance in your life to run in the Belmont Stakes, and he’s getting his chance.”

Unlimited Budget will have Rosie Napravnik aboard while Garrett Gomez will ride Midnight Taboo. Already confirmed were Javier Castellano aboard Revolutionary, Hall of Famer John Velazquez on Overanalyze, and Hall of Famer Mike Smith aboard Palace Malice, whose blinkers will come off for the Belmont .

Pletcher, who saddled five horses in the Kentucky Derby, won the Belmont in 2007 with the filly Rags to Riches, who was the first of her sex to win the race since Tanya in 1905.

Jockey Rosie Napravnik, who rode Five Sixteen to a fifth-place finish in last year’s Belmont , looks to make history Saturday as she teams with the filly Unlimited Budget for this year’s “Test of the Champion.”

Napravnik, who was aboard Mylute in the Kentucky Derby (5th) and Preakness (3rd), will be the first woman to ride in all three legs of the Triple Crown in the same year. She is bidding to join Julie Krone, who won the 1993 Belmont with Colonial Affair, as the only woman to win a Triple Crown race.

“It’s exciting,” said Napravnik of the possibility of a woman jockey winning the Belmont aboard a filly. “I think it’s great to bring some attention to the sport.”

Napravnik, who rode Unlimited Budget to a 3 ¾-length victory in the Grade 3 Rachel Alexandra Stakes on February 23 at the Fair Grounds, is looking forward to being reunited with the Street Sense filly.

“She’s a big, strong filly, and obviously she’s been training well,” said Napravnik of the Repole Stable color-bearer, who is 4-0-1 from five starts, with her only loss a third-place finish in the Grade 1 Kentucky Oaks. “With a big field, it’s going to be a tough race for everyone. But I don’t think [she will be intimidated] – she looks more like a colt. Plus, she can sit close to the pace, or close into it.”

Belmont Stakes contender Freedom Child had a quiet morning on Tuesday, going out shortly after 7 for what trainer Tom Albertrani called a routine gallop.

“It was just an uneventful jog and gallop, his normal routine,” Albertrani said. “He jogged back to the three-quarter pole, turned around and galloped a mile and a half. It went well. He couldn’t be better.”

A chestnut son of Malibu Moon, Freedom Child is coming off a command performance in winning the Grade 2 Peter Pan on May 11, leading from gate to wire to win by 13 ¾ lengths under jockey Luis Saez, who will be back aboard for Saturday’s Belmont.

“I couldn’t be more happy with the horse right now,” Albertrani said. “He’s in great condition, and he’s giving us all the right signals. Now, we just have to lead him over there.”

Albertrani said he wasn’t concerned about the prospect of having 15 horses for the Belmont , which equals the largest field in the race’s 145-year history, set in 1983. The last time as many as 14 went to the post was 1996.

“It’s not going to bother us,” he said. “We’re not going to be looking at more than two or three in front of us. The rest will hopefully be behind me.”

The 3-year-old Into Mischief gelding was aggressively hand-ridden down the stretch of Belmont ’s main track by trainer Rudy Rodriguez, who pulled Vyjack up shortly after crossing the wire.

“I just wanted him to work the right way, and he did what we asked him to do,” Rodriguez said. “I was happy with the way he did it, nice and comfortable. He looked good, and he seemed happy. He looks like he came back good, not blowing or anything. Beautiful.”

Heavy rain on Monday forced Rodriguez to postpone Vyjack’s final breeze until Tuesday, and it was delayed further after the trainer got caught in morning traffic on the way to Belmont from his base at Aqueduct, not stepping on the track until 9:24 a.m.

“He’s got very, very good energy,” Rodriguez said. “Yesterday, we tried to graze him a little bit and he was bucking and kicking. He’s been very happy. Maybe he likes Belmont . I hope so.”

Vyjack most recently finished 18th in the Kentucky Derby.

“He looked like he handled the track better than Churchill,” Rodriguez said. “He looked a lot more smooth. Over there, he changed leads a couple times, but that track was a little hard for him. He’s doing great. Now, we have to hope he brings his ‘A’ game.”

A winner of his first four career starts, including the Grade 2 Jerome and Grade 3 Gotham at Aqueduct, Vyjack will be ridden for the first time in the Belmont by jockey Julien Leparoux.

Giant Finish, who was 10th in the Kentucky Derby, turned in his final serious work for the Belmont Stakes this morning, breezing a half-mile on the main track under Hall of Fame jockey Edgar Prado, who will be aboard for Saturday’s race.

The chestnut colt, who arrived from the Fair Hill Training Center and had Monday’s scheduled work postponed, went out shortly after the renovation break at 8:45 and was caught in 49.04 by NYRA clockers.

“He did it nice and easy to the pole, and I let him out a little bit,” said Prado of the Tony Dutrow-trained colt. “He got over the track well and finished up good. It was really a maintenance work.”

Prado, who won the inaugural running of the $500,000 Penn Mile on Saturday, is a two-time winner of the Belmont , taking the 2002 edition with Sarava and the 2004 running with Birdstone.

Anthony Bonomo, Jr., son of Always in a Tiz co-owner Anthony Bonomo and assistant to trainer Dominick Schettino, said a decision would be made late Tuesday afternoon whether to run the son of Tiznow in the Belmont Stakes or the $150,000 Easy Goer Stakes for 3-year-olds at 1 1/16 miles on the undercard Saturday.

“We haven’t decided yet,” Bonomo Jr., said. “Today, I’ve got to meet with my father later on this afternoon because entries are tomorrow. We’ll have a final decision by late afternoon.

“After Always in a Tiz’s last race [a ninth-place finish in the Grade 1 Wood Memorial], he was a little tired; he needed some time to regroup,” he added. “We finally backed off him a little bit. We’re trying to figure out the weather conditions and what the future forecast looks like and the way he’s coming into himself, do we want to put him in a big race right away or put him in the future races right away or slowly work him into the future races and aim him toward the end of the summer.”

The New York Racing Association, Inc. (NYRA) will match all funds donated on track Saturday, Belmont Stakes Day, to the American Red Cross and the Thoroughbred Racing Association of Oklahoma for victims of the massive tornado that struck Moore , Okla. on May 20. Dozens of people were killed by the twister, which had winds between 200 and 300 mph.

Taking a direct hit from the F5 tornado was the 106-acre Orr Family Farm, also known as Celestial Acres. The training facility was said to be filled with thoroughbreds and quarter horses stabled for the meet in progress at Remington Park . More than 75 horses were believed killed by the tornado.

Donations will be accepted at a designated table located on the first floor of the Belmont Park grandstand. For more information please visit www.redcross.org or www.traoracing.com.