American Pharoah Gallops in the Slop at Churchill Downs

AMERICAN PHAROAH GALLOPS IN THE SLOP AT CHURCHILL DOWNS;
BAFFERT WILL BE AT BARN 33 TUESDAY MORNING TO CHECK ON CHAMPION 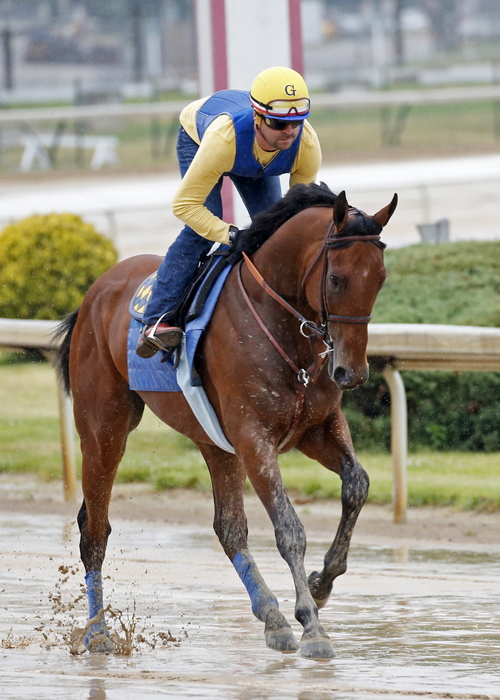 “He went great,” Alvarez said. “He loves the slop.”

Jimmy Barnes, chief assistant to trainer Bob Baffert, also was pleased with how the homebred son of Pioneerof the Nile galloped over the sloppy going.

“He went very nice and looked good,” Barnes said. “He likes an off track. Everything seems fine.”

American Pharoah is 2-for-2 on an off track. His two wins in the slop came in the Rebel (GII) at Oaklawn Park and the May 16 Preakness.

Baffert is scheduled to fly into Louisville from California on Monday night to oversee his string of 12 horses that are stabled at Churchill Downs. Aside from American Pharoah, he has last year’s Breeders’ Cup Classic (GI) winner Bayern and 2014 Clark Handicap Presented by Norton Healthcare (GI) winner Hoppertunity in training at Churchill Downs. Barnes said that Baffert would determine Tuesday morning when American Pharoah would resume breezing.

Baffert is expected to be at Barn 33 Tuesday morning and will return to California later that day.

In other Belmont Stakes news, Conquest Stables’ Conquest Curlinate jogged and galloped one mile with exercise rider Jorge Balbuena in the irons for trainer Mark Casse.

FANS INVITED TO WATCH SPECIAL 8:30-8:45 A.M. TRAINING FOR BELMONT CONTENDERS – With Triple Crown hopeful American Pharoah and three other Belmont Stakes contenders stabled on the grounds, Churchill Downs Racetrack is offering a special 8:30-8:45 a.m. training period for those horses through Tuesday, June 2. Additionally, area horse racing fans are invited to watch those colts train from the first floor of the facility, including the new Courtyard area, free of charge.

Churchill Downs Racetrack will open its Gate 17 entrance between 8-9 a.m. each morning through June 2 so the public can watch Kentucky Derby and Preakness winner American Pharoah along with rivals Conquest Curlinate, Keen Ice and War Story prepare for the 1 ½-mile third jewel of horse racing’s Triple Crown – the $1.5 million Belmont Stakes (GI) on Saturday, June 6.

Churchill Downs’ concessionaire Levy Restaurants will have coffee, juice, soda, water and doughnuts available for purchase near the Aristides Garden. Also, video of the exercises will be shown on the Big Board and infield video screens.

Those unable to attend can watch an online live stream of the daily exercises athttp://www.kentuckyderby.com/workouts/live from 8:30-8:45 a.m. through Tuesday, June 2. Also, clips of the activity will be uploaded on the Kentucky Derby YouTube channel. A graphic with each horse’s name will appear on the screen with the corresponding horse, although a majority of the focus will be on American Pharaoh.

Despite rainfall and short notice, more than 100 fans attended Monday’s debut of the special training session.

SPECIAL BELMONT STAKES DAY BOX SEAT PACKAGE – Churchill Downs has a special box seat package for the June 6 Belmont Stakes simulcast. For $24, fans can get an undercover box seat, official program, a domestic beer or souvenir soda and a custom, limited-edition Kentucky Derby 141 T-Shirt that features a victorious American Pharaoh. Fans can purchase the package by visiting the online box office at www.ChurchillDowns.com/Tickets.

DEPARTING ON TRACK FOR SATURDAY’S OPENING VERSE – Claiborne Farms and Adele Dilschneider’s Departing is on track for Saturday’s $65,000 Opening Verse overnight stakes, which will be the son of War Front’s first start on turf and his first start since a seventh-place effort in last year’s Clark Handicap.

The 5-year-old gelding put in two solid works over the Matt Winn Turf Course, breezing five-eighths of a mile in 1:01.80 and 1:01.60, respectively on May 14 and May 21. Jockey Robby Albarado has the mount.

“It feels great when you win races,” Leparoux said. “I knew coming in we had a good chance. Everything went smooth yesterday. All of my horses ran really big. There’s still a long way and I have to travel quite a bit in June. What really matters is that I have had a good meet so far.”