Lexington, KY – June 18, 2012 –The Alltech National Horse Show announced today that this year’s already exciting Open Jumper schedule has been enhanced even further with the addition of the $50,000 Alltech Puissance class to be held on Friday evening.

Following a successful debut last year, the second edition of the Alltech National Horse Show in Lexington, Kentucky, is set for October 30 through November 4, 2012. The show will once again be held at the Alltech Arena at the Kentucky Horse Park.

The Puissance class is a high-jump competition with the big wall often reaching over 7′ in height. Always an audience favorite, this class is added to an Open Jumper division that this year will feature well over $400,000 in prize money.

“Puissance is an exhilarating display of power and performance in jumping,” said Pearse Lyons, president and founder of Alltech. “It is a tremendously exciting spectator event; a ‘wow’ event that brings equestrians and the general public alike to the edge of their seats. It is a great way to add an extra spark to an already thrilling horse show.”

“We’re very excited about adding the Puissance to our schedule,” said National Horse Show Association President, Mason Phelps, Jr. “A number of horsemen suggested it, but we’re most energized about the crowd appeal that the Puissance class brings for our audience. We’re doing all we can to increase our spectators and to do that, we have to increase our spectator appeal, as well. With the Puissance and the addition of the American Saddlebreds, we feel we’ll be creating a real equestrian show for the folks attending this year’s Alltech National Horse Show.”

Last year’s Alltech National Horse Show closed with great excitement, receiving unanimous approval from the horse show community. The Show was a great success with the thousands of attendees, in addition to nearly half a million viewers who watched the events unfold online.

“With bigger prize money, an extra competition day and these new classes,” Phelps said, “we are very excited about what lies ahead.”

“We hope that everyone will mark their calendars for this year,” added Phelps. “With what we learned during our first year, I can promise you that the Alltech National Horse Show in 2012 will prove to be an amazing event.”

The 2012 Alltech National Horse Show takes center stage on October 30 through November 4, 2012 at the Kentucky Horse Park in Lexington, Kentucky. In addition to the top rated hunters and the ASPCA Maclay National Championship, the show features world-class international, open, junior and amateur-owner jumpers competing for the biggest prize money on the United States indoor tour. 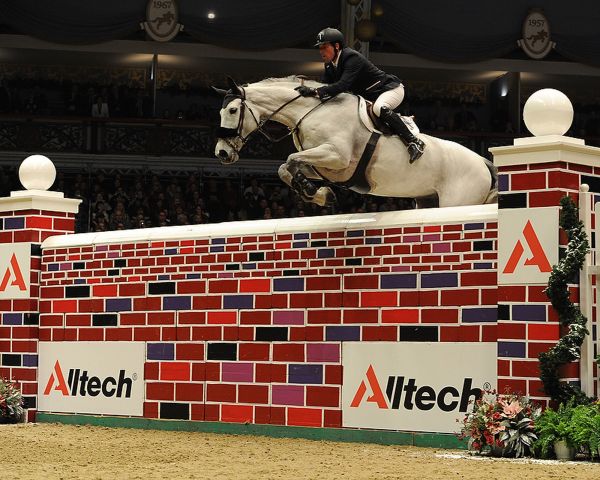 Photo Credit: Great Britain’s Guy Williams and Richi Rich 111 cleared 7ft 1in to share the honors in the Alltech Christmas Puissance at Olympia in London, England. Photo © Alltech. This photograph may only be used in relation to this PMG press release.